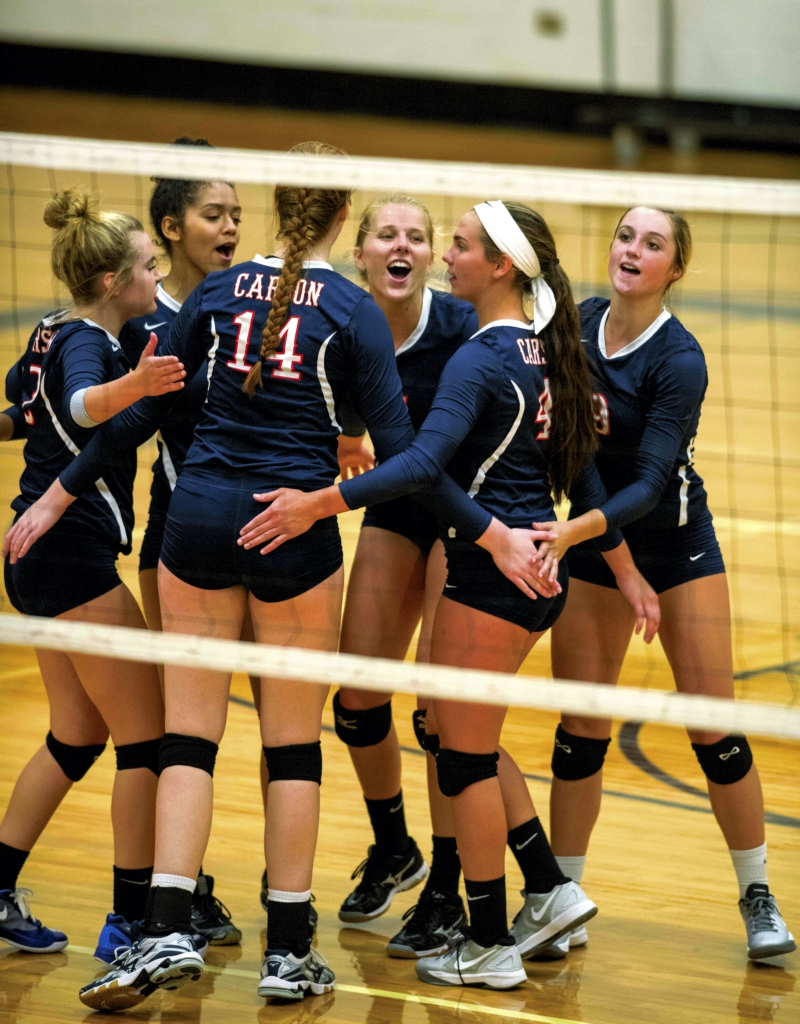 JON C. LAKEY / SALISBURY POST ... Carson volleyball players celebrate a point during a match in September. The Cougars defeated A.C. Reynolds in the first round of the state 3A playoffs yesterday. Shown above, left to right, are Chloe Jacobs, Dominique Wilkerson, Lindsay Elmore, Elena Turnbull, Madison Barnhardt and Mallory Weast.

CHINA GROVE — Coaches are often vexed and perplexed by their playoffs seeds, but Carson volleyball’s Kelan Rogers has no complaints.
Carson got a No. 4 seed and looked worthy of it for most of Wednesday’s 25-10, 25-14 and 25-20 sweep of A.C. Reynolds in the first round of the 3A playoffs.
“I thought we’d probably have to be on the road for the second round, but we got two home games,” Rogers said. “We were the highest seed of anyone who wasn’t No. 1 from their conference, so I’m pleased.”
Carson (23-5) was a second-place team mostly because it plays in the South Piedmont Conference with a Cox Mill squad that’s ranked ninth nationally. Three of Carson’s losses were to Cox Mill.
Homecourt advantage was a major factor for Carson in the first round. Not because the gym was overflowing with crazy fans with painted faces but because A.C. Reynolds had journey from Asheville to get to China Grove.
“They had a long trip,” Carson outside hitter Mallory Weast said. “You could see a big difference in them once they got warmed up. Then they started digging a lot more balls and they started making us work.”
Early on, it was about as easy as any playoff game will ever be. There wasn’t a lot of toil involved. Elena Turnbull was pounding serves, and Carson took an immediate 7-0 lead in the first set. Then it was 14-4, and then it was 18-5, and then it was over.
Seter Chloe Jacobs got the ball to Turnbull, Madison Barnhardt and 6-foot-1 middle hitter Lindsay Elmore, and they took care of business without much opposition. Elmore had six kills and an ace.
“They didn’t play very well, and we were ready to play,” Rogers said.
Carson jumped out again in the second set, moving ahead 8-5 and then 9-5 on furious, back-to-back kills by Turnbull. But then the Rockets (11-12) got a couple of blocks that created confidence.
“Two things happened,” Rogers said. “One, they started playing a lot better, and, two, we relaxed some after we got a lead.”
The Rockets crept back as close as 15-11 before Carson buckled down and put the set in the books. Weast had five kills in the set, while Turnbull and Elmore contributed three each.
“Good passing, good sets and good kills,” Elmore summed up.
The third set was interesting. Carson again assumed command. The Cougars led 6-2, and then extended the lead to 17-9. But that’s when the Rockets scored three straight points and got energized.
“They were digging a lot more, and they were reading better what we were doing,” Weast said. “We had to figure out different ways to get points.”
Barnhardt had a pretty big kill to make it 18-12. That slowed the visitors down a bit. Moments later, Barnhardt smacked down another one to make it 21-12.
But the last four points were tough for Carson to get. They were sweaty work because the Rockets were digging everything.
“Some of the balls they picked up really surprised me,” Elmore said. “But you’ve just got to keep playing.”
A.C. Reynolds got back as close as 23-20, but a kill by Elmore made it 24-20.
Then Katie Blackwell made the pass, Jacobs made the set, and Weast pinpointed a left-to-right crosscourt smash to end the match.
Elmore had seven kills in the final set, while Weast had four.
Carson’s 28-3 2015 season ended with a fourth-round loss at West Henderson on Halloween, so the Cougars have been on the other side of the travel trauma. It’s nice to be at home, and the Cougars will play their second-round match tonight in China Grove at 6 p.m.
Enka’s Sugar Jets, who swept West Rowan on Wednesday, will provide the opposition. Enka (13-6) is a little west of Asheville.
“We’re super-excited about the playoffs,” Weast said. “We hope we can go far.”
•••
NOTES: The win was the 199th for Rogers at Carson. He’s 199-48 in eight seasons. Other than a 17-10 mark in 2014, Carson has won at least 21 every year. His 2012 and 2013 teams were 65-5 and reached 3A state championship games. … Turnbull made a commitment this week to play sand volleyball for UNC Wilmington.