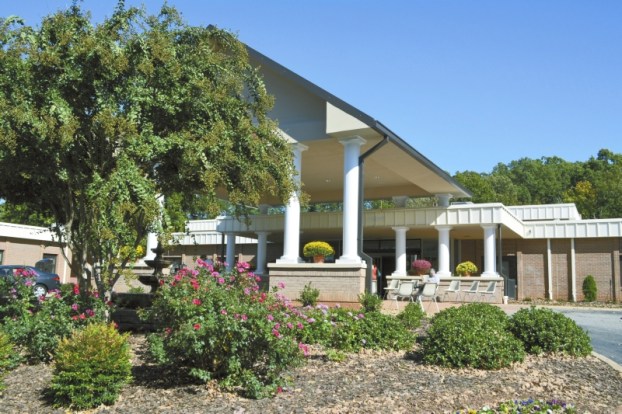 The new porte cochere or enhanced entrance at Trinity Oaks Health & Rehab signals the end of the facility's Keeping the Promises Campaign. It was dedicated Sunday afternoon. Photo by Susan Shinn. Even though Leon Williams was honored Sunday, he still insisted on acting as doorman for visitors, something he does every day. Photo by Susan Shinn.

It was a pretty big day for Leon Williams at Trinity Oaks Health & Rehab, but he still insisted on serving as the doorman for a steady stream of visitors.

Williams, who moved to the facility — formerly known as the Lutheran Home — in 2009, had the recently completed enhanced entrance dedicated in his honor. Cindy Rentz, who arrived after Williams and is his frequent sidekick, also had her name on the plaque. Her impossibly wide smile grew even wider when her name was announced.

The dedication, said Bill Johnson, executive director of the Trinity Oaks campus, signifies the end of the Keeping the Promises campaign, and the start of the new Changing Spaces campaign. The second campaign will remodel the 1970s-era building, including covering the cinderblock walls and improving the flooring. The campaign will also add new assisted living beds, and a new wing at Trinity Oaks Retirement, Johnson said.

Until Dec. 31, any donations made will be matched dollar for dollar, Johnson added, “and I want to take every penny from this donor that I can!”

Johnson unveiled the plaque honoring Williams and Rentz immediately following the Sunday afternoon worship service. Indeed, the activities room was so full that Johnson said he wished he had an offering plate.

As Johnson carefully brought the plaque forward for its unveiling, Williams, from his usual front-row spot, remarked, “We don’t want it to fall apart.”

Williams’ sisters, Linda Safrit and Carolyn Hood, and Rentz’ sister, Kaye Leonard, were on hand for the dedication, as well as numerous nieces and nephews and friends of each member of this dynamic duo.

“Leon is our doorman,” Johnson said, “and Cindy is never far behind him.”

Jokingly, Johnson added, “We do have HIPPA laws here, but they’re hard to enforce with these two!”

Williams grew up in Fulton Heights and was for years known as the Mayor of Maupin Avenue. When he moved to the nursing home with his mother, the late Juanita Williams, Johnson said they simply transferred his title. On the plaque, Rentz is listed as president.

“This is a beautiful day the Lord has made, in so many different ways,” said Ted Goins, president of Lutheran Services Carolinas.

Goins and his wife, Cheryl, moved to Rowan County 16 years ago and got to know Williams. He added that he’s known Rentz for almost 50 years, as she was a member at St. Luke’s Lutheran, Tyro, where his pastor father served for many years.

“This could not be a better day,” Goins said. “We are focused on the right thing here.”

Goins quoted from John 10:10, in which Jesus says, “I came that they may have life, and have it abundantly.”

“I don’t know anybody that has more abundant life than Trinity Oaks,” he said. “That vision just permeates everything throughout this community.”

He added, “Thank you all for being here. You’re all part of this wonderful family at Trinity Oaks.”

During the reception that followed underneath the porte cochere, Williams remained his unflappable self, answering most questions with his customary “yeah” and grin.

Rentz was escorted to the reception by Eric Montross, her niece’s husband. Leonard said that she was extremely pleased with her sister’s care.

“She is the poster child for longterm care,” she said.

Rentz lived with Leonard and her late husband after their parents died, Leonard said. After she came to Trinity Oaks Health & Rehab, Leonard asked her sister once if she’d like to stay with her again.

“She hasn’t answered me yet,” Leonard said, smiling. “She didn’t want to hurt my feelings.”

By Wayne Hinshaw For the Salisbury Post The Ceremonial Key Swap  at China Grove Roller Mill on Sunday afternoon was an event... read more