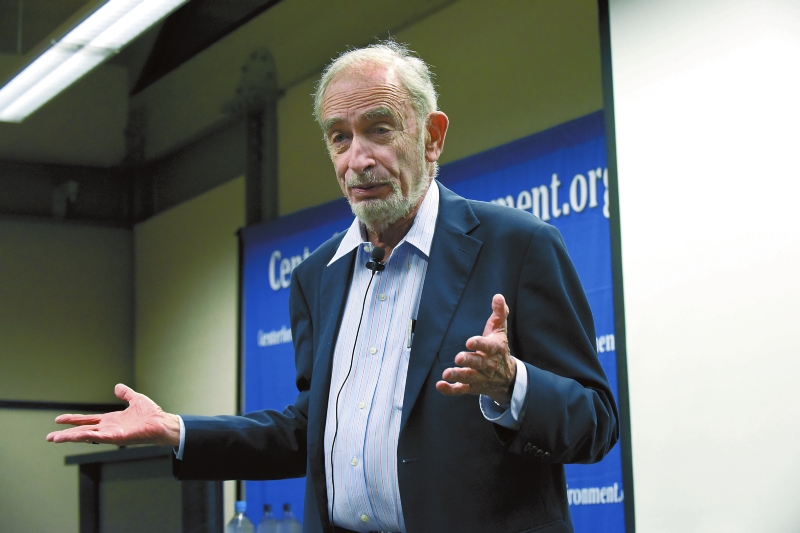 Dr. Paul Ehrlich at the Center for the Environment. photo by Wayne Hinshaw, October 20, 2016

SALISBURY — The growing population is playing a big part in the world’s environmental problems, according to biologist Paul Ehrlich.

Paul Ehrlich and Pete Myers spoke at Catawba College’s Center for the Environment on Thursday night.

Ehrlich is a prize-winning biologist, known for his book “The Population Bomb,” which warned that the world’s human overpopulation would lead to mass starvation.

He is a Bing Professor of Population Studies at Stanford University and president of Stanford’s Center for Conservation Biology.

Pete Myers, founder and CEO of Environmental Health Sciences and adjunct professor of chemistry at Carnegie Mellon University, started off the event by talking about the interactions humans have with the planet’s biogeochemical forces, a subject he has been studying.

Myers explained that many of the things created by humans are becoming hazards for other organisms and the environment. Dr. Pete Myers at the Center for the Environment. photo by Wayne Hinshaw, October 20, 2016

One example he gave involved the use of microbeads, commonly found in face washes and toothpastes. Myers said trillions of the microbeads go into the sewer system, and only one percent is caught by treatment systems. The rest go into the oceans.

Myers said those microbeads have been found floating on the ocean’s surface and in the stomachs of fish.

“They have found microbeads at the bottom of the Mariana Trench,” he said.

Myers said microbeads would not be a problem if such a large population of humans did not use them.

Other problems Myers mentioned that humans are causing included soil depletion and overuse of the East China Sea for fishing.

“What we want ultimately is to be able to help regional and local communities identify steps they should be taking today based on the urgency of these risks to prepare for what may be a time of some crisis,” he said.

When Ehrlich spoke, he said the world’s growing population is increasing the amount of toxins on the planet.

“If there are only 2 billion people on the planet, first of all, there would be just less of the chemicals manufactured that are now being manufactured,” he said.

Ehrlich said the toxins human are putting into the environment, the paving over of natural habitats and rapid climate change are all decreasing biodiversity, something agriculture is dependent on.

“We are utterly dependent on those other organisms for our lives,” he said.

The world needs better soil and more land to farm in order to feed a population projected to double by 2050, Ehrlich said, but the food system releases harmful greenhouse gases into the atmosphere.

“You have to expand the system that’s just pouring greenhouse gases into the atmosphere and disrupting the things that run that system,” he said.

At the end of the talk, Ehrlich said human society is capable of change and he encouraged attendees to work hard to leverage the time left.