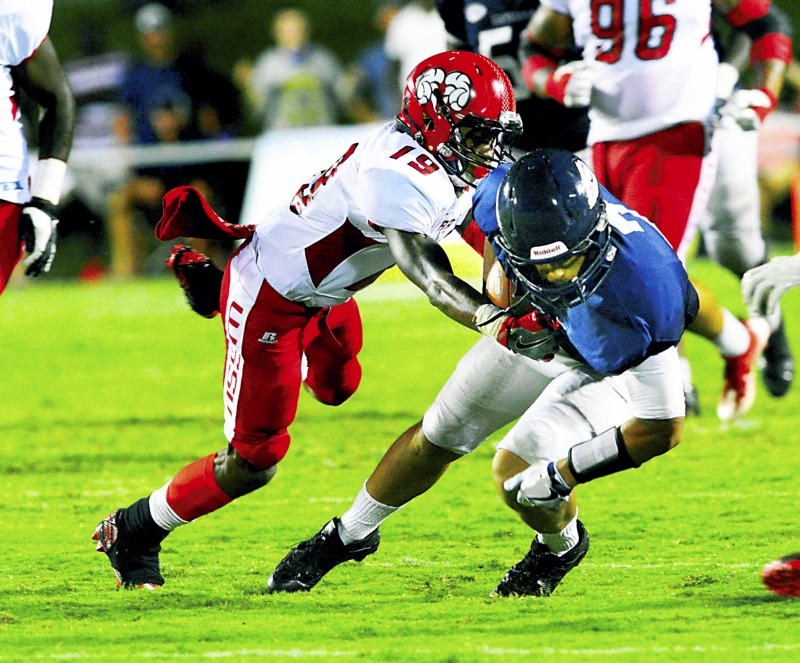 Wayne Hinshaw/for the SalIsbury Post ... Catawba receiver Jourdan Osinskie makes a catch against Winston-Salem State on Sept. 10. Osinskie, a red-shirt sophomore, has come all the way back from a 2014 knee injury — an ACL tear.

SALISBURY — Catawba’s coaching staff did a stellar job of identifying talent for the recruiting class it introduced on National Signing Day, Feb. 5, 2014.
Linebackers Kyle Kitchens and Michael Peppers, guard Quinzavious Sands, running back Eamon Smart, receiver Keyon West, quarterback Reid Carlton, punter Caleb Berry and nickel back D.J. Jackson have become familiar names to Catawba football fans.
The other player who’s still with the program from that National Signing Day group got a late start, but 6-foot-3, 230-pound receiver Jourdan Kristopher Osinskie, who has 4.6 speed to go with his outstanding size, may have the highest ceiling of all.
“He’s physical,” Peppers said. “And he has great hands.”
While many of the guys he came to Catawba with are now juniors, Osinskie is a sophomore on the field because of a medical redshirt year. He would’ve played a significant role for the Indians in 2014 as a true freshman, but he suffered a torn ACL the first week of camp.
“He was all alone in the end zone, going up for a touchdown catch,” Catawba coach Curtis Walker said. “When he came down, he blew out his knee.”
Head athletic trainer Bob Casmus took a look at the injury and shook his head.
“He said it was a textbook ACL tear,” Osinskie said. “I went up for that pass and I knew when I came down my leg was not in the right place anymore.”
Osinskie said his unusual surname can be traced back to a Polish grandfather, but his ancestry is a melting pot of races and cultures. There’s a little of everything in there, including Swedish.
Osinskie traveled a circuitous path to Catawba. Born in New York, he spent some school years in eastern Guilford County, but his parents moved to Florida when he was in the sixth grade.
It was in Davenport, Fla., 35 miles south of Orlando, that he became a star for the Ridge Community High Bolts.
“I played quarterback,” Osinskie said. “For a while, quarterback was my passion.”
Next came a family move from Florida back to North Carolina.
Southern Alamance High in Graham was delighted to add a player with Osinskie’s gifts to the roster, but the one thing the Patriots didn’t need was a quarterback. They already had star Johnathan Lloyd established at that position. Lloyd signed with Duke, although the Blue Devils have made a receiver out of him.
“Lloyd was very good, can’t take anything away from him,” Osinskie said. “So they used me in a lot of different roles at Southern Alamance — H-back, receiver, running back and defensive end. I put up some pretty crazy stats.”
Osinskie played against top-notch opposition, such as Greensboro schools Dudley and Page, but he put the ball in the end zone often enough that he attracted serious attention from FCS D-I schools such as South Carolina State and North Carolina Central. Still, Catawba worked its way into the recruiting mix alongside bigger schools.
“Coach (Chris) Collins is no longer at Catawba, but he was the guy who recruited me,” Osinskie said. “One of the things that sold me on Catawba was that Coach Walker had played high school ball in Alamance County (at Graham High). That connection made me feel comfortable with Catawba.”
Catawba’s 2014 plans for Osinskie were shattered along with his knee, but Walker believes that unexpected redshirt year is going to pay off in the long run with added maturity and muscle.
“When he was hurt it gave him a chance to reflect on life and his priorities,” Walker said.
Osinskie had never suffered an injury more serious than a turned ankle, so the ACL rehab was a game-changer for him. When he was out, he realized how much he missed football. Now he’s determined to see how far football can take him.
The first baby-steps in his comeback in 2015 were quiet. He played in six games and had a couple of catches for 17 yards at Carson-Newman.
His impact has become greater this season.
When Catawba signed Osinskie, he was envisioned as a field-stretching, pass-catching tight end, a tall, strong guy with the ability to motor down the field for explosive plays.
While he’s still listed as a tight end, Osinskie usually lines up as wide receiver now. His size/speed combination can create mismatches — too big for cornerbacks, too fast for linebackers.
“It’s hard for linebackers to keep up with me,” Osinskie said.
Osinskie made his first major contributions for Catawba in the early home loss to Winston-Salem State when he had four catches for 56 yards and also forced the Rams to commit a pass interference penalty. He had a 21-yard catch on a post route for a first down and he moved the chains again on a 15-yard drag route.
Osinskie’s first career touchdown came a few weeks after that on a 34-yard pass play in Catawba’s win at Wingate, and he pulled in a 20-yard pass in the soggy home loss to Limestone for one of Catawba’s handful of positive pass plays.
Walker said the next phase for Osinskie to become a complete player is to become more forceful at using his size as a run-blocker on the edge.
“Becoming a better blocker, on the line and out on the perimeter, that’s important to me,” Osinskie said.
He’s getting there, and he’s still got a lot of time left.
He could wind up being one of the best from Catawba’s 2014 signing class.