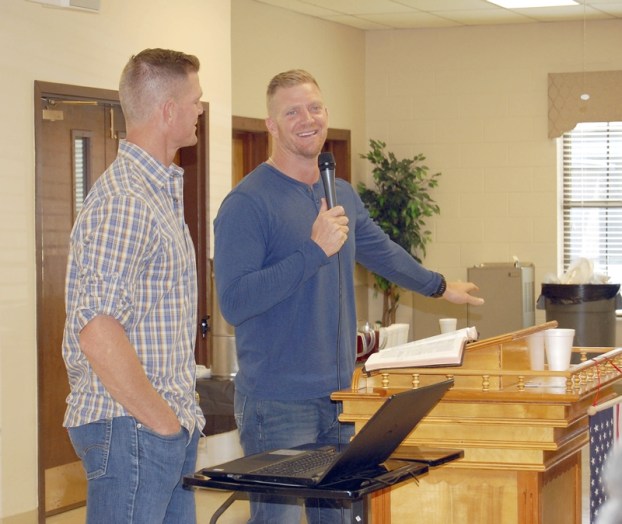 Amanda Raymond/Salisbury Post The Vote your Values Christian Awakening Tour held a luncheon at Central Baptist Church in Kannapolis on Monday to urge pastors to encourage their congregations to vote. David (left) and Jason (right) Benham were guest speakers for the event, and David Benham said one way for Christians to be leaders is to vote.

KANNAPOLIS — The Vote Your Values Christian Awakening Tour made a stop at a church in Kannapolis to encourage local pastors to talk to their congregations about the importance of voting.

Vision America and STAND, two Christian organizations, have been touring the country speaking to pastors and community leaders about the importance of the Christian vote.

The Rev. Dean Hunter and Central Baptist Church hosted the luncheon on Monday, inviting local pastors and the public to listen in.

Hunter is also vice chairman of the Rowan-Salisbury Board of Education.

“As an elected official myself and becoming friends with a lot in our county and in our city, I find it more than pleasing and exciting, to be honest, when we have some men and women who have run for office that really are truly born-again Christians,” he said. “And they don’t check their Christianity at their church or at home, they actually bring it into the place where they’re serving.”

While attendees finished up their lunch, they heard from several speakers who talked about how influential the Christian vote can be.

Dr. Rick Scarborough, founder and president of Vision America, said pastors can use Vision America’s resources to find out how many people in their congregation are registered to vote and how many are actually voting.

Scarborough said when the pastors of an area work together, they can change the outcome of an election.

“Pastors, the cure for everything that ails this country is sitting in the pews of our churches,” he said. “We need to release them to pursue those offices and support them with our votes and our money.”

Bishop E.W. Jackson, founder and president of STAND, said his organization offers voter guides with Biblical verses and principles to guide Christians on how to think about the election.

Later in the event, Jackson said Christians should put away divisions of race and culture and vote for the candidate who most aligns with Biblical values.

David and Jason Benham, former professional baseball players, authors, speakers and entrepreneurs, were the guest speakers for the event.

David said one of the most important ways Christians can show leadership is to vote.

“Any time we see leaders that are going to stand on not just righteous principles but common sense moral decency, get behind them,” he said.

Dr. Mark Harris, pastor of First Baptist Church in Charlotte, said apathy was “probably one of the biggest sins of unbelief that there is.”

“You have to be able to move beyond personalities and come to recognize the … policies,” he said.

Leon Threatt, U.S. House of Representatives candidate, said the church can change the tide of an election.

“If we would show up in this election, we would turn America around …” he said.

Hunter said it can be difficult to get pastors to preach about politics to their congregations. He said although pastors should not tell their congregations who to vote for, they should encourage them to vote based on their Biblical convictions.

Congregations “need men of God to stand before them and preach God’s absolute truth of his word so that really there’s no question who they could or should be voting for,” he said.