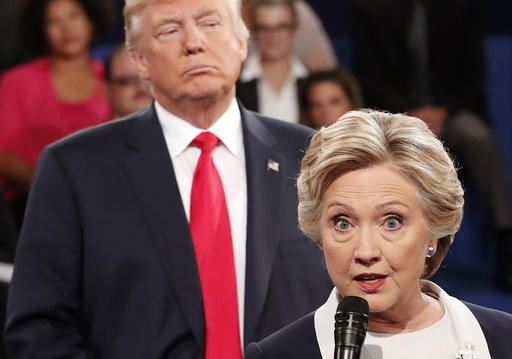 Not since George and Martha in the play “Whose Afraid of Virginia Woolf?” or for older readers Don Ameche and Frances Langford in the radio comedy “The Bickersons,” have we seen the kind of verbal pugilism practiced in Sunday night’s presidential debate between Donald Trump and Hillary Clinton.

If the business of Trump’s lewd language about women caught on tape 11 years ago and Bill Clinton’s sexual history with Hillary enabling him in the trashing of his conquests could be set aside, only the issues would remain, and wouldn’t that be good?

Sunday night, Clinton recycled the familiar Democrat playbook that the wealthy aren’t paying their “fair share” in taxes, when the real issue is that government already receives record amounts in tax money, but misspends much of it and never seems to have enough.

In the debate, Clinton said she “only” wants to raise taxes on the wealthiest Americans, not the middle class. ATR notes she has said just the opposite on many occasions. It calculates that if all of her tax proposals are enacted, it would cost taxpayers $1 trillion over 10 years and gives the following examples:

She has said she would not veto a payroll tax hike on all Americans should such a bill reach her desk and would set aside her pledge not to boost taxes on middle-income earners.

She wants a tax on sodas that ATR estimates would add $2.16 per 12-pack. Sen. Bernie Sanders (I-VT) charged this would violate her pledge to protect the middle class from tax hikes: “Frankly, I am very surprised that Secretary Clinton would support this regressive tax after pledging not to raise taxes on anyone making less than $250,000. This proposal violates her pledge.”

Other tax increases include a national gun tax of 25 percent, a 65 percent “death tax,” which ATR notes she wouldn’t have to pay because of the way she has arranged her finances. She wants to raise the current capital gains tax from 23.8 percent to 43.4 percent, which would harm investments and stifle capital creation. She would not lower the corporate tax rate, which Trump has pledged to do, even though the U.S. has one of the highest corporate tax rates in the world, which has driven many businesses overseas. And, like President Obama, she is an enemy of the coal industry, despite her claims to be friendly toward it in Sunday’s debate. Her campaign chief, John Podesta, has left the door open to a carbon tax, saying if Congress passes such a measure “we’ll take a look at it.”

Trump purports to favor school choice, which is an essential tool for escaping poverty and would do more than any federal anti-poverty program to help poor children obtain a good education. Hillary Clinton claims to favor school choice, but only as far as publicly funded charter schools. Since she and many Democrats receive political contributions from teachers unions, it’s unlikely she’ll let poor children escape failing schools.

Rumors are swirling about opposition researchers offering to pay employees of Trump’s NBC program “The Apprentice” for recordings of other lewd things he might have said to further distract from the issues.

The hypocrisy meter is in hyper drive when you consider that some of the same Democrats condemning Trump said of Bill Clinton’s numerous affairs “it’s just about sex” and had nothing to do with his performance as president. These are people who still hold John F. Kennedy in high regard, despite his long list of women with whom he had sex, including secreting some into the White House.

This won’t be the end of the revelations about Trump, anything to divert attention from Hillary’s real positions on the real issues that matter most to Americans. If we must have bickering, how about bickering over something important?