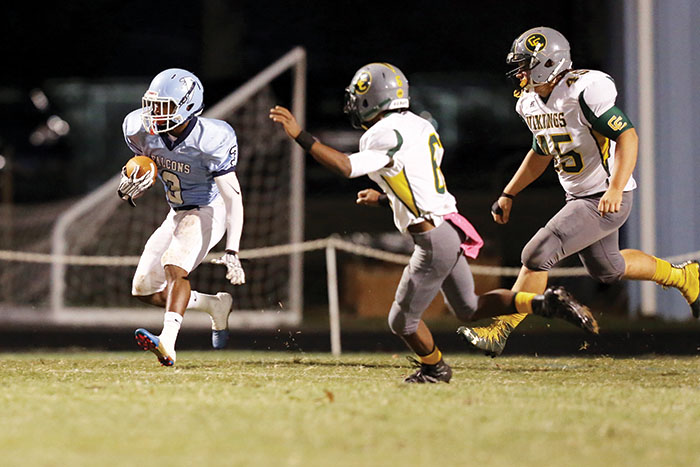 West Rowan’s Jovon Quarles (3) opens the second half with a 70-yard touchdown run. Photo by James Sipes, for the Salisbury Post.

MOUNT ULLA — West Rowan won, 41-14, against visiting Central Cabarrus on Monday night, but the Falcons appeared to be in trouble — serious trouble — for the first 21 minutes.
Coming off a stunning upset of Concord, Central owned the line of scrimmage early, held a 14-7 lead late in the second quarter and had the ball and a lot of momentum.
But it was at that point that West Rowan linebacker Lawrence “LJ” Robinson took over.
“When our offense came off the field after we got stopped (at the Central 40), we told them that we had their back,” Robinson said. “The defense went out there with the idea of getting the ball right back for them.”
Central (2-5, 1-4 SPC) used tough tailback DeMarcus Alexander (34 carries, 210 yards) as a relentless, tireless sledgehammer all night, but when a penalty put the Vikings in a second-and-13, they elected to go to the air on what became the game’s defining snap.
“West was really squeezing the box, so we needed to throw it,” Central Cabarrus coach Donnie Kiefer said. “The wheel route was open, but our young quarterback just didn’t make the right read, and he threw it somewhere else.”
Sophomore Derrick Boykins’ errant toss found a leaping Robinson at the Central 42, and Robinson, a running back until switching sides of the ball as a sophomore, suddenly turned into a juking, darting Barry Sanders.
He started down the left sideline, got hemmed in, almost went down, and then cut back. He steamed almost all the way across the field before finally putting the ball in the end zone with 2:40 left in the first half. His electrifying runback and Federico Cruz’s PAT made it 14-all.
“I was pretty lucky that he threw the ball to me, but the thing that happened after that was our defensive guys quickly transitioned into offensive guys,” Robinson said. “Guys threw great blocks and I was able to make a cutback and score.”
“LJ” also had the pivotal pick-six in West’s huge home win against Jay M. Robinson. This was his fourth defensive TD in the last two seasons.
“He’s made big plays all year,” West coach Joe Nixon said. “And he makes them at the most crucial times. That pick-six tonight came when we were reeling.”
While Robinson’s play was worth six points on the scoreboard, it’s hard to quantify exactly how much it meant. For West, it was uplifting. For a Central team that had been playing its tails off in a physical struggle, it was devastating.
“That play definitely made the game do a 180 turn,” West’s hard-nosed defensive lineman Tyler Wheeler said. “We started slow, but we progressively played harder and harder. After the big interception, we did a better job of stopping the run. We played West Rowan football.”
West Rowan football has the Falcons (6-1, 5-0 SPC) on top of the league heading into another home game Friday against East Rowan.
There was still work to do in the second half, but the Falcons wasted no time punching the clock. On the first snap, a trap play, West back Jovon Quarles (163 rushing yards) popped free near the Central sideline, turned the corner and was off to the races. No one got close to him until he handed the ball to an official after a 70-yard dash.
“We’d struggled to run the ball in the first half, but what we talked about at halftime was communicating better upfront,” West tackle Javon Lofton said. “On that play to start the half, we communicated and we executed. I told Quarles to stay behind me and he’d get a touchdown — and that’s what happened.”
After an interception by free safety Malcolm Ingram, West scored on a Payne Stolsworth pass to Kortez Weeks with 7:36 left in the third quarter.
With West up 28-14, Central was knocked out of its comfort zone, and West’s terrific cover guys — that may be West’s biggest strength — against Central’s passing game was a mismatch.
“Throwing the ball has been our Achilles heel all year,” Kiefer said. “It’s really bit us — and it bit us again.”
Before the night was done, Ingram had two picks and cornerback Paris Hillie also grabbed one.
Hillie took his interception back to the Central 3 to set up a Martavio Rankin TD run.
Quarles got his second TD of the night and ninth of the season to close the scoring.
“Once we got momentum on our side, we did all the things that we needed to do to get the win,” Robinson said.
Central won the field position battle early and had West backed up. The Falcons started their first two possessions at the 12 and the 10.
But Stolsworth found streaking freshman Jalen Houston in the middle of the field for a sudden 80-yard score and a 7-0 West lead, before the Vikings fought back hard.
Alexander broke a 30-yard run for a 7-all tie. Then Central outnumbered the Falcons at the point of attack on a physical, 50-yard onslaught that gave the visitors a 14-7 lead. Boykins got the TD on a short run.
It was all going smoothly for Central — until Robinson did what he does so often.
“West is a good team, but we didn’t play as well as I thought we would,” Kiefer said. “We didn’t play with the same fire that we had against Concord.”