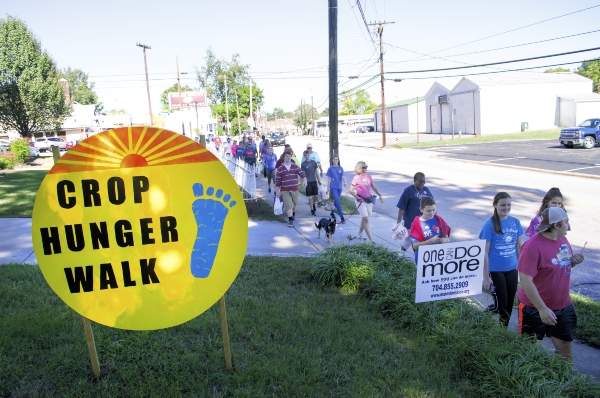 CHINA GROVE — Under clear skies, dozens of people on Sunday walked or ran through town as part of an annual event that raises money for Main Street Mission.

The group of people — numbering about 100 — started at First United Methodist Church on West Church Street, turned onto Main Street and walked 3 miles through China Grove. Whether walking or running, participants in the CROP Hunger Walk were helping raise awareness and money for Main Street Mission.

One-third of proceeds from the walk go the Main Street Mission and the remainder go to national causes, said Megan Parks, one of the event organizers. The money raised through the annual CROP Hunger Walk helps Main Street Mission pay for groceries, said Director Anne Corriher.

“When you get a lot of people together and you’re walking down Main Street, there are a lot of people who might be driving by and say ‘hey, I wonder what they’re doing,'” she said. “If they read our shirts and our signs, maybe they’ll want to know what we do at Main Street Mission.”

In addition to money and awareness, however, the CROP Walk also directly provided food. Many of the walk participants carried canned goods from First United Methodist Church to Main Street Mission. Canned goods were dropped at the food pantry and the walk continued.

Although the event started at First United Methodist Church, its congregation weren’t the only walk participants. Parks said the walk is open to anyone who wants to participate.

Before the walk started, walk participant Ron Brown told about his first time at China Grove’s CROP Hunger Walk. A graduate of Main Street Mission’s Getting Ahead program, Brown said he “didn’t have a penny to his name at the time.”

Brown said he was trying to connect with the community at the time. He waited and watched as people signed up for the walk, specifically seeing if walk participants were handing over money and receiving a badge.

“I didn’t want to be embarrassed for being turned away,” he said.

In fact, there isn’t a fee to participate in the event — something Brown noted.

For those who can’t make it the entire 3 miles, there is also a way to participate — a golf cart that’s been nicknamed “the poopy mobile.”

“There is sometimes people that want to give their support and do as much as they can but then realize they outdid themselves,” Parks said.

Sunday’s CROP Hunger Walk in China Grove is one of many events that occur nationally. The events were conceived in 1969, according to the organization’s website. CROP stands for Christian Rural Overseas Program.