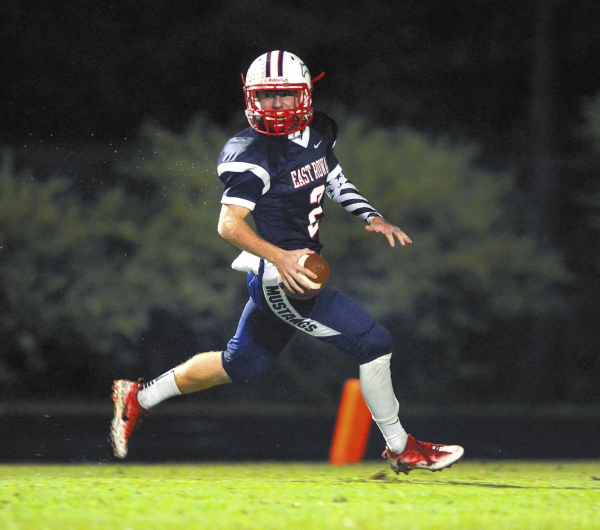 Wayne Hinshaw/for the Salisbury Post ... East Rowan cornerback Wesley Porter (2) scores the only touchdown of the game with this interception return against Northwest Cabarrus last night in Granite Quarry. The Mustangs won, 8-0

GRANITE QUARRY — Down by eight points, Northwest Cabarrus had fourth-and-1 at the East Rowan 6-yard line in in the final minutes, and everyone in the stadium knew Trojan workhorse George Miller was going to get the ball one more time.
And then Miller, not big, but all heart, took the handoff, plowing straight ahead.
“I was manned up outside against the slot receiver, and I saw a hole opening up and I saw 33 (Miller) coming through it,” East cornerback Wesley Porter said. “But then (East linebacker) Christian Bennett stepped in and filled that hole. He made a great tackle. He made a great play.”
Bennett’s dramatic stop that knocked Miller down inches from the chains — and Porter’s pick-six in the third quarter — made the difference for the Mustangs in an odd, 8-0, South Piedmont Conference win.
Odd because East had very little offense, couldn’t generate first downs, couldn’t move the ball and couldn’t get its defense much rest, especially in the second half.
East standout Max Wall, the leading rusher in school history, was limited to 67 yards on 18 carries by the feisty Trojans and was smacked for losses three times.
The field was wet, but it was in pretty decent shape. It’s not like players were slipping and sliding, so weather wasn’t a major factor. The defenses were just better than the offenses.
“Defensively we played very well, just played our butts off,” East coach Kenneth McClamrock said. “Wesley Porter (who also had a sack) had a great game and we made several big stops.”
Miller jabbed away at the Mustangs in the first half for 92 of his 137 rushing yards, but East never broke. Despite managing only two first downs, East got three booming punts from Tate Houpe and a fourth-down stop by Devon Cherry and managed to get to halftime in a scoreless tie.
Northwest Cabarrus was driving inside the East 40 early in the third quarter when Porter struck gold.
“I was blitzing off the edge, and I saw the running back (Miller) running a swing route,” Porter said. “He’d been running the ball just about every play, so the ball was probably coming to him. I saw the quarterback (Sam Walker) stop and throw it, and he never saw me. I’d missed an interception earlier and it made me mad, but I caught that one in stride.”
Porter’s sprint to the end zone for his third TD of the season was the first action on the scoreboard and came with 9:26 left in the third quarter. Wall’s two-point conversion run around he right side that made it 8-0, was the last time the scoreboard changed.
After that, it was just a matter of whether East could hang on in a game in which the Mustangs had to deal with 100-plus yards in penalties, some of them drive-crushers.
“Offensively, Northwest took a lot of things away from us, and we just didn’t do much,” McClamrock said. “Eleven defenders are keying on No. 7 (Wall) right now, and we’ve got to have other guys step up.”
Jake Gregory (fumble recovery), Koy Ketchie and Zack Simpson were among those who had stout games for East’s defense, but Northwest still had a chance when Houpe crushed another punt from his 11-yard line with the clock ticking toward the 4-minute mark.
Unfortunately for the Mustangs, they were penalized on that punt, and Houpe had to kick again.
His next punt wasn’t as deep, and Northwest’s I.J. Sturdivant made a courageous, spinning return down to the East 38. When Walker hit Ben Coates for 23 yards — Northwest’s biggest play of the night — the Trojans were perched at the East 15, with plenty of time on the clock.
Ketchie made a key stop, Bennett helped make the stop on third-and-2 at the 7, and next came that critical fourth-and-1 on which Bennett met Miller in the hole. Miller gained something, but he didn’t get quite enough, and the measurement revealed that the Mustangs had held.
East (3-4, 2-3 SPC) snapped a two-game slide, and it was win the Mustangs desperately needed with West Rowan and Robinson looming next on the schedule.
It was the first shutout for the East defense since the Mustangs beat Salisbury, 32-0, early in the 2013 season. It was the first conference shutout for East since it buried North Iredell, 49-0, in a North Piedmont Conference affair in 2012.
“Going into the game, we thought we’d be able to score more points, but the important thing was to get the win, any way that we could,” Porter said. “I’m glad I was able to make a play for us.”