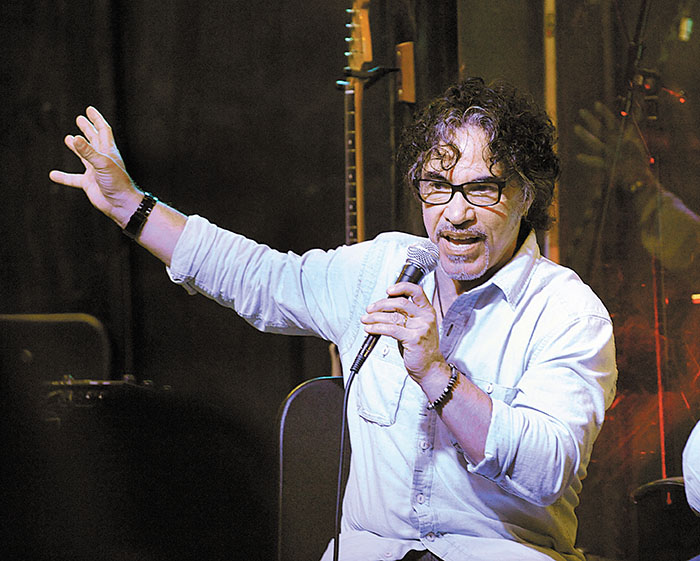 He shared the why of that story with a group of Catawba’s music students when he visited campus on Friday.

When Oates was a seventh grader in Pennsylvania, he had a good friend whose older brother went to college at Catawba. When the older brother came home to Pennsylvania for his first Christmas break, he brought with him “a big stack of folk albums,” Oates explained, noting that in the 1960s there was a folk music renaissance in America, particularly in the South where folk root music began.

“I started hearing this music I’d never heard before,” he said. “I read liner notes on the albums that included names of people like Joan Baez and Pete Seeger. I started to try to learn this music, playing and stopping the albums, and grabbing my guitar to try to recreate it. I spent literally a few months absorbing it. That music and those styles became an intrinsic part of my music and it opened up a world that I previously was ignorant of.

“Without Catawba, I don’t know where my musical world would have gone. It’s pretty amazing after all of these years that I’m actually here.”

Oates, in town to play to a sold-out audience at Lee Street Theatre, is a friend of Bill Armour, Catawba’s assistant to the president for special projects. He’s also an advocate and supporter for Catawba’s new Segue 61 certificate program in Nashville. That program, which launches Jan. 7 with 18 talented students, will offer promising musicians, songwriters, producers/engineers and music business hopefuls from all genres an advantage in launching their careers.

Oates shared that he worked very hard in the ’60s, ’70s and ’80s with musical partner Daryl Hall “to create a career and a legacy of music that was unique to us.” The success of Hall and Oates through those three decades allowed him in the late ’90s and early 2000s to begin solo work.

It was a chance for him to ponder: “What was it that made me want to become a musician — that made me separate and apart from Daryl?”

His pondering brought him back to folk root music, “the music that inspired me as a kid” and allowed him “to create something uniquely new and different than what I did with Daryl.”

“When I started my solo career, I sort of rewound the clock.”

“Don’t discount the early influences on you as musicians,” he admonished the students listening. He noted the influence of Doc Watson, “one of the greatest guitarists of all time,” on his music and added he had had the pleasure of playing at Merlefest in North Carolina.

“Doc Watson is a very important part of my musical history. He set the standard and had a rhythmic ease that flowed. I always hoped to reach that level of musicianship.”

Born in New York City to parents of Italian descent who were first generation Americans, Oates shared that “I sang as a baby.”

He grew up listening to big band music from the likes of Tommy Dorsey before he “immediately gravitated to rock and roll” as it evolved in the ’50s and ’60s and “learned to play the guitar playing rock and roll.” In the ’60s, he began incorporating folk music into his evolving style, noting, “Somehow all of this music informed everything I did.”

Hall and Oates “created our own brand and began writing our own songs,” Oates said. The two produced their first video to “She’s Gone” in 1973, preceding MTV by almost 10 years. And although the two were involved in the earliest days of MTV, he added, “I always viewed the video presentation as just an adjunct of our music.”

Ironically, the script that Oates’ sister created to produce that first video in 1973 will be included in a book he is writing about his life and career. That tome is expected out in spring 2017.

Noting how recording technology has changed during the course of his career, Oates shared, “I feel like my life and music career have really paralleled the history of recording – from 2-track, to 4-track, to 8-track, to 16-track which became 24-track and then it was digital. In 1984, analog recording had reached its zenith and it was the beginning of the digital age.”

He said Hall and Oates were fortunate to be at a career pinnacle during this time “because every company that had this gear wanted to give it to us and wanted us to use it.” The two were able to “take the earliest of digital technology and combine it with state of the art analog technology.”

When asked about some of his career highlights, he recalled opening the Apollo in 1985 with two singers from the Temptations, Eddie Kendricks and David Ruffin.

“I was able to recreate a teenage moment on stage with my idols,” he said, calling the experience “one of the greatest moments of my life.”

His induction into the American Songwriters Hall of Fame in 2005 was another remarkable and memorable milestone.

When asked about the enduring quality of Hall and Oates, Oates shared this anecdote. “In the early 2000s, I started to notice younger people in the audience when we were playing. Little by little it started to change and now it’s mostly 20s to 40s with a smattering of old folks.” And the why of that, he contends, are the songs.

“Our songs have stood the test of time and are resonating with people of all generations. We’re actually more popular now than we were in the ’80s, and I don’t take that for granted for one second.

“Thanks to the songs that Daryl and I created, it has given me a creative freedom that very few people are able to achieve. I’m coming at this from a point of view of gratitude and I don’t want to miss a second of it.”

While on campus, Catawba students in the Urb’n Sol group directed by Catawba alumnus and musician Dennis Reed ’06 were able to perform for Oates and their fellow students gathered. They performed two original songs – Destiny Stone’s “Colorblind” and Darryl Bell’s “She’s All That,” before delighting Oates with their soulful take on Hall and Oates’ “Sara Smile.”