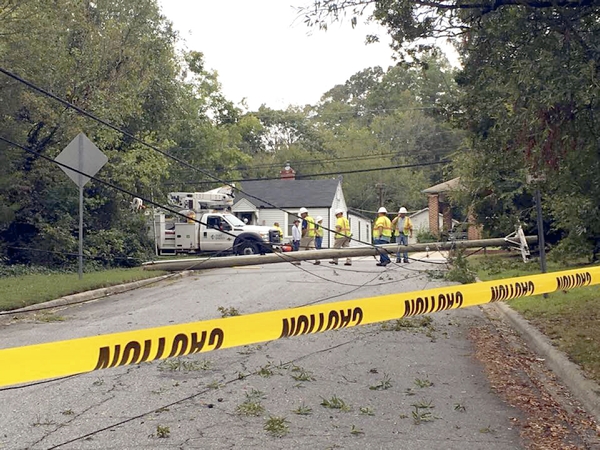 A logging truck apparently clipped a utility pole Thursday morning and other poles went down including this one at West Innes and Corriher Street, near Catawba College. Repairs to the poles continued into the late evening. Photo by Liz Tennent

SALISBURY — A log truck clipped a utility pole early Thursday morning at West Innes Street and, like dominoes, some of the surrounding poles went down, partially. No injuries were reported, but repairs took all day after one pole fell to the ground taking power lines with it.

Salisbury Fire Chief Bob Parnell confirmed the incident happened around 7:57 a.m. after a call was made about a power pole that had broken at the top at 1920 West Innes Street and lines were stretched across the road.

Motorists had to detour around the incident along Brenner and Summit avenues. The downed lines were blocking residents on both West Corriher and Lantz avenues because they couldn’t go around the live lines.

Resident Liz Tennent said she was leaving Thursday morning and witnessed the crash. She was taking her great niece, Gisele, to school when she backed out of the driveway and then heard a loud boom.

Tennent said she backed up and it felt as if she had hit another vehicle. The ground shook and it startled Tennent and Gisele.

“We turned to see what happened and we saw the pole crash to the ground,” Tennent said.

She said the next thing she saw was sparks from the utility lines.

“It looked like a fireworks display, but not in a good way,” she said.

Tennent said they were shaken by the ordeal because she was 30 seconds from being in the very spot where one of the poles came crashing down.

She said she shudders to think what would’ve happened if the pole had come crashing down onto her car, especially with live wires.

Tennent said Gisele, 9, was really scared and too upset to leave her side.

She said she’s very grateful she and Gisele and no one else were injured. Tennent said she’s also thankful to the 911 operator who took her call because she was in such shock she probably wasn’t making any sense.

She said the emergency responders were also great about explaining the hazards of trying to go around the wires and made sure everyone stayed put.