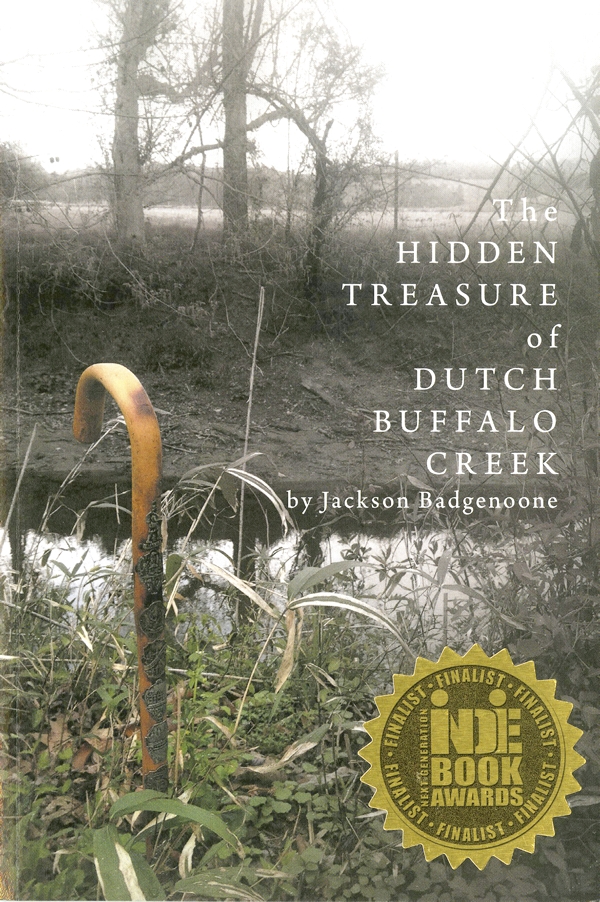 Vincent Vezza, with his book, 'The Hidden Treasure of Dutch Buffalo Creek,' is one of three authors coming to sign books at South Main Book Co. on Oct. 7

The cover and title are intriguing — “The Hidden Treasure of Dutch Buffalo Creek,” showing an embellished cane near a creek. The foreground is in color, the background in black and white.

And the author’s name, Jackson Badgenoone, is another mystery.

Vincent James Vezza uses that as his pen name for a concept novel of historical fiction. The name is pronounced Badge-no-one, and Jackson is a Neverborn, a child who died in a miscarriage. She can observe the history of a family — in this case, Vezza’s family, loosely — through time, and it’s her job to tell the story.

And that’s just the beginning of the many ideas Vezza presents in what he calls “historical fiction based on true life events and true family members.”

The book is complex enough that friends have told him they’ve read it three times to understand everything that’s going on.

“I think it appeals to historians, history teachers,” Vezza says from his home in Mount Pleasant. “I’m not sure how the general public will feel about it …”

It’s a life’s work for Vezza, who is using stories he wrote decades ago and held on to.

It begins as an aging man looks into a creek behind his home and thinks he’s found gold. But it’s a bayonet, and that character spends a year studying what the bayonet is and what it means.

It belonged, he discovers, to a Hessian soldier who abandoned it and the British during the Revolutionary War.

That soldier becomes a farmer, who is friends with the man who finds what is now Reed Gold Mine.

And here is where Jackson Badgenoone comes in. She’s the Neverborn daughter of a soldier and a Native American. She chronicles the lives of people named Jackson, like Andrew Jackson and Stonewall Jackson.

She tells the story of 10 main characters from the Revolution to modern day, including James, who finds the bayonet.

She writes of the family experience in World Wars I and II, of artifacts and generations. The 10 characters are a way to highlight history as seen through the eyes of ordinary people, based on true life stories.

Vezza says the book has a spiritual element, as well. Near the end, “where old man is in his den, he glimpses the future and his grandchildren are now grown and have children of their own. … A light comes through the window, and shines on a Bible … on Isaiah 45:3, “I will give you hidden treasures, riches stored in secret places, so that you may know that I am the Lord, the God of Israel, who summons you by name.”

Vezza once wanted to be history teacher, but didn’t get to finish school. He had jobs that involved conflict and competition. That’s part of his story. He was consumed by his career and providing for his family, and started writing while recovering from a hip replacement.

He’s now working on the 10 books for those 10 characters, and asks readers on his website, www.hiddentreasurenovels.com, what they want to see next.

He is producing an heirloom edition, that will be a multimedia experience, with photos, video and more.