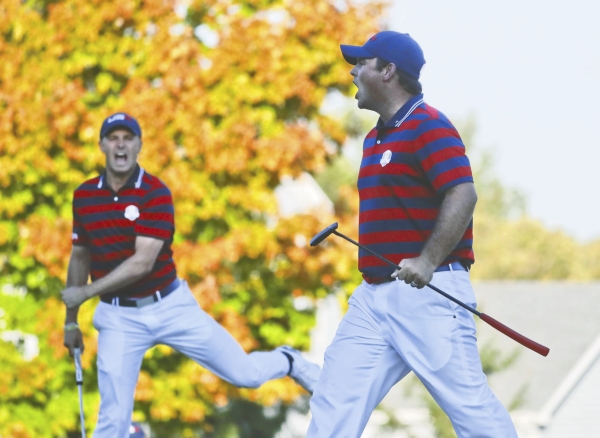 CHASKA, Minn. (AP) — The Americans are making all the right moves in this Ryder Cup.

Europe was riding the momentum as it inched within one point Saturday at Hazeltine. U.S. captain Davis Love III heard conflicting ideas on the radio and by text message from his assistant captains, all of them weighing in with the best lineup for the final session of team matches. The question was Patrick Reed and Jordan Spieth, the only Americans who had yet to sit out.

“I finally just said to Tiger, ‘Are we playing them or are we sitting them?’ He said, ‘No, you have to send them back out there,’” Love said.

Reed delivered another moment sure to burnish his growing Ryder Cup reputation.

He was at his bullish best in the anchor match with Jordan Spieth, taking over with great shots and chest-thumping cheers that set the tone for his team and put the Americans on the verge — again — of winning back the cup.

The Americans need only five points from 12 singles matches to win the Ryder Cup for the first time since 2008, and only the third time in the last two decades.

They led 10-6 four years ago at Medinah when Europe put together a staggering display of putting and produced the largest comeback by a visiting team in Ryder Cup history. The Europeans refer to that as the “Miracle at Medinah,” and they might need another one Sunday.

“We’re one closer than we were at Medinah,” Rose said. “It’s going to be a monumental challenge tomorrow. We’re going to put out our lineup and we’re going to look at each other man-to-man tomorrow. It’s going to be eyeball-to-eyeball on the first tee, no partners, no friends out there on the golf course. Just go out and try to put a point on the board. That’s everybody’s mission.”

The raucous and at times rude crowd at Hazeltine won’t have to wait long to get fired up.

Leading off the singles is Reed against Rory McIlroy, who along with Belgian rookie Thomas Pieters has done his part to keep Europe close. McIlroy and Pieters were undefeated as a tandem, combining to go 11-under par in 17 holes of a 3-and-1 victory over Dustin Johnson and Brooks Koepka, the lone European point in fourballs.

McIlroy shouted “C’MON!” with every putt, even staring at the crowd and daring them to hurl insults, boo or throw anything else his way.

“It’s a tough environment for us to come and play in. We expect that,” McIlroy said.

“It’s same for the U.S. guys when they come to play in Europe. You have to keep your concentration out there. It’s been a long day and sometimes emotions run high. … The more they shouted, the better we played.

“I hope they shout at us all day tomorrow.”

“I know for a fact that he can’t wait to get on that tee tomorrow morning,” Clarke said.

Most painful for Clarke was watching his best friend and captain’s pick, Lee Westwood, miss crucial short putts on the back nine to cost Europe a valuable point.

Westwood and Masters champion Danny Willett never trailed until they both made bogey on the par-3 17th. Westwood missed a 5-foot par putt to stay all square, and then with a chance to at least earn a halve, he badly missed a 2-foot birdie on the final hole to give J.B. Holmes and Ryan Moore a 1-up victory.

Phil Mickelson, in his 11th straight Ryder Cup, showed he can deliver on the golf course as well as he can run a task force meeting. Lefty produced timely wedges and key putts down the stretch as he and Matt Kuchar combined for nine birdies in a 2-and-1 victory over Sergio Garcia and Martin Kaymer.

The final hour turned solid red on the scoreboard, right when it looked like a putt or two in Europe’s favor could have made it a one-point deficit instead of three.

Rose and Stenson had a front-row seat to an exhibition by Reed, who whipped the crowd into even more of a frenzy than it already showed. One down after four holes, Reed played the next four holes in 5 under, including a wedge he holed from the sixth fairway for eagle, winning them all for a 3-up lead.

Their victory was even more important considering they let a sure point get away in foursomes Saturday morning, leading 4 up with six holes to play until Garcia and Rafa Cabrera Bello rallied to earn a halve. Europe only trailed by one point going into the afternoon.

Love said there was no need to bring up Medinah in the team room Saturday night. This whole process has been about looking forward and starting over.

Europe can only hope recent history repeats itself.

“We’re going to have to work hard and play very, very well tomorrow,” Clarke said. “It’s been done before from a worse position. We have a big task ahead of us but the guys are capable of doing it.”