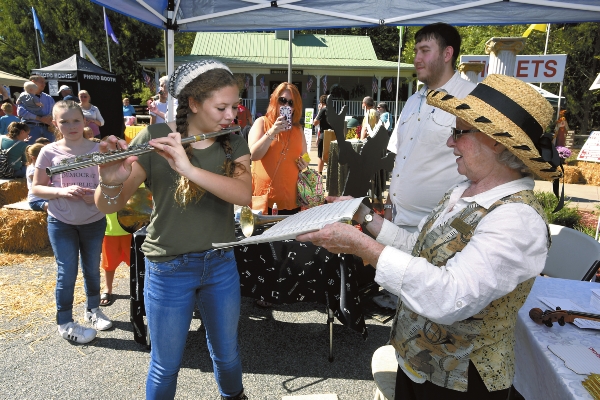 SALISBURY — After he’s been at Autumn Jubilee nearly 18 years, people know where to find the blacksmith.

The portable forge is tucked away under the trees next to the gem mine, and the crowds that flock to the annual fall festival at Dan Nicholas Park follow the sound of a hammer on an anvil or the smell of smoke.

James “Jeep” Sabo said that more than once old timers have stopped by while he’s twisting steel to tell him they remembered the smell of a forge from their grandfather’s day. They used to watch the smith beat iron into shape or work the bellows.

During Autumn Jubilee, Sabo said groups of children will take a seat on the ground and watch him or his apprentices work for more than an hour.

Sabo is one of nearly 180 vendors selling wares and working their craft at the 37th annual Autumn Jubilee. The yearly festival can attract nearly 30,000 people on a good day, Rowan County Parks Director Don Bringle said.

And Saturday, the festival weekend’s first day, people flooded the park. Free parking and admission plus the smell of good food and the chance to browse unique crafts lured people to the park.

For many, it’s a yearly tradition that they were eager to get back into after last year’s cancellation due to heavy rain.

Stacey Hurley and her family stood guard in the pumpkin patch while kids Zoie Rhodes and Savanah and Konnor Hatley smeared brightly colored acrylic paint on the orange skin of a pumpkin.

Hurley and her family are from Albemarle, but they love the fall feeling and activities available at Jubilee.

“We try to come every year,” she said.

For Kristin Vera and son, Aiden, Autumn Jubilee marks the start of fall.

“It’s what gets you into the season,” she said.

Vera is originally from Florida and said she wasn’t aware that there were any fall craft festivals like Jubilee there. But for her, browsing through the craft booths, painting pumpkins and munching on a turkey leg are what makes it feel like fall.

“Everything just seems to be going really good,” she said.

Today will be the last day of the 2016 Autumn Jubilee. The festival opens at 10 a.m. and will end at 6 p.m. Parking and admission are free; pets are not allowed.