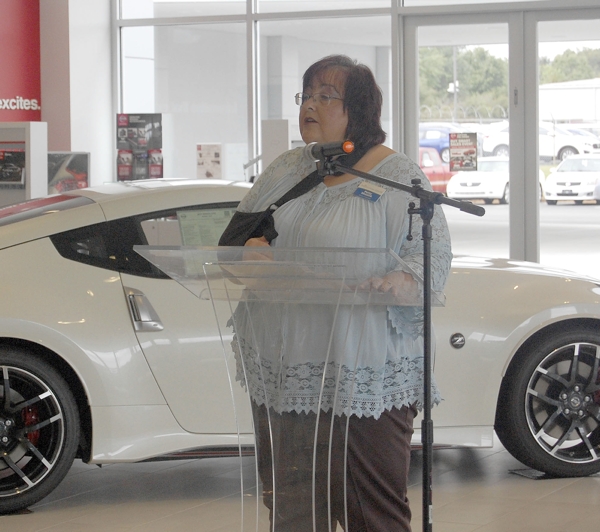 Amanda Raymond/Salisbury Post Patty Messick, from Trinity Living Center, talked about the Rowan County United Way's impact on the facility at the report meeting on Wednesday. The campaign has raised about 31 percent of its $1.5 million goal.

The United Way announced a goal of $1.5 million for this year’s campaign, with a theme of “It’s the Right Thing.”

Penny Greer-Link, campaign chair, reminded the crowd that they needed to exceed the goal in order to provide for the different agencies.

“… Just meeting goal is basically not going to do it,” she said. “We need to get over this goal.”

The Agencies Division has raised the highest percentage of its goal. The division raised $23,450 of it’s $30,000 target, which is about 78 percent of the goal.

The public employees division has raised almost 46 percent of its goal, with more than $55,100 raised towards its $120,000 target.

Jennifer Traylor and Joan Correll talked about running the campaign at AkzoNobel.

They started with pledges in September and ended up raising 28 percent over the initial goal with almost $28,800. The amount was 17 percent more than last year’s efforts. Plus, the company will match the employees’ contributions, bringing the total to almost $57,600.

The company will keep the campaign going with raffles and bake sales. Employees will also get a chance to throw a pie at managers’ faces by paying $1.

“In the month of October we do fun stuff at AkzoNobel,” she said.

Josh Marshall and Patti Poole from Dillard’s said the company started doing more of the “fun stuff” this year.

Dillard’s raised $24,000 from forms and the corporate gifts, and about $865 was raised through the additional activities.

Marshall said their 50-cent lollipop sale was a big hit.

“We extended it for two days because they didn’t want me to take it away,” he said.

Other companies talked about offering prizes and incentives to encourage their employees to give.

“If you’re going to raise a lot of money, you have to do a lot of stuff. It just doesn’t come easy,” Struzick said.

The husband ended up passing away, but the facility was still able to offer support to the woman until her family could make arrangements.

Though the family said they would not have been able to get through everything without the facility’s help, Messick gave credit to the United Way.

“We could have never done that without the United Way,” she said.

Greer-Link gave the crowd two challenges before they left the meeting. The first was to keep sharing the campaign’s video, launched at the kickoff event earlier this month.

The video features notable community members lip dubbing to the songs “Do Something” by Matthew West and “Don’t Stop Believin’” by Journey.

The second challenge was to raise a minimum of 60 percent of the goal by the next report meeting.

The first three names in the new car drawing were also chosen at the meeting. They were Ken Mowery from Novant Rowan Medical Center, Kendall Brown from Lutheran Services Carolinas and Stephen Chirico from the city of Salisbury.

The next report meeting will be begin at noon on Oct. 12 at the Gerry Wood Auto Group at 525 Jake Alexander Blvd. S.