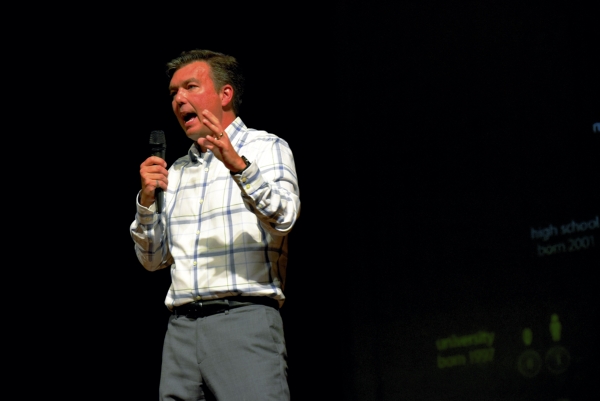 “I think we’re in an age of technology revolution that’s pretty amazing,” he said.

Landis was invited to speak to teachers and administrators at Rowan-Salisbury Schools after Superintendent Dr. Lynn Moody heard him speak at a conference in Texas. Moody said she was struck by his ability to articulate how and why technology is important in education and said she thought, “I really wish my teachers and principals could hear this.”

During his presentation Tuesday, Landis said that society had recently undergone a paradigm shift in technology — from a model where information was scarce, only available from printed books or a professor, to one where it was plentiful and people must discern which pieces are true.

Because of this shift, he said, much of the current framework for education no longer adequately prepares students for the future, and it may not even fit their present.

Students in middle and high school have never known a world without the internet. For them, it’s something that Landis called “light-switch level” technology — something that’s ubiquitous and that they may take for granted.

“This is a world that’s different than the world we grew up in,” he said.

Landis clarified that it wasn’t a difference that was good or bad, it just was. And old-style methods and tools of teaching no longer made the cut. Asking a child to write a six-page summary paper no longer accomplishes its intended goal if a student can look up and compile all the information in 15 minutes.

And that’s where technology comes in. The world of education has become used to using technology as a substitute, or to improve efficiency — we send e-mails instead of regular mail, or use a word processor instead of a typewriter. But it can be so much more than that. Technology can give teachers access to students’ thought processes, to give detailed feedback instead of a simple letter grade or to turn mistakes into teachable moments.

For Landis, technology is simply another tool in a teacher’s belt. Used properly and creatively, it can completely redefine learning.

“We’re not telling teachers how to teach, we’re giving them a better toolbox to choose from when designing their lessons,” he said.

And technology can level the playing field for some students — providing alternate resources to students with dyslexia or physical disabilities without having to remove them from the classroom. Which, Landis said, makes integrating technology into the classroom a priority.

“These are no longer technological problems, they’re ethical ones. They’re moral ones,” he said.

Landis described the current technological revolution as a “tipping point in humanity’s history.”

“It’s a powerful time to be an educator,” he said.

For Rowan-Salisbury administrative staff, the talk was external validation that the district is moving in the right direction with the one-to-one initiative.

“I want our community to understand what we’re trying to do,” Moody said.

Landis spent the afternoon meeting with system administrators and staff, helping them brainstorm how they could use technology to solve problems in teaching. He also spoke with community members at the Salisbury Rotary Club.