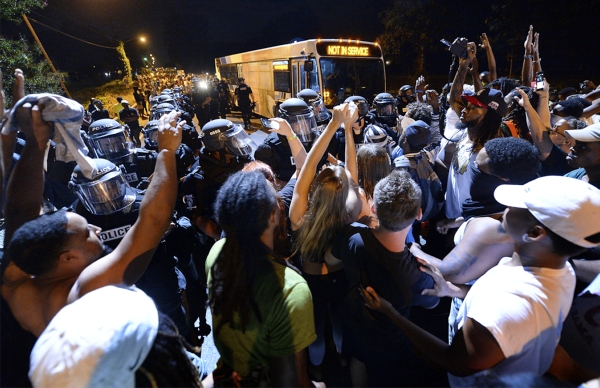 Excerpts from two North Carolina editorials about this week’s violence in Charlotte:

This week, Charlotte became one more visibly troubled city in America, another place that’s endured violent protests in the wake of a shooting involving police and a black person. Our city may be different from Ferguson or Baltimore, and our police have been progressive in building relationships with communities here. But Charlotte shares something with so many U.S. cities and towns – that blacks feel threatened in their interactions with law enforcement, and powerless in other ways.

No, that shouldn’t be expressed with lawlessness, as it was in uptown and elsewhere this week. But we shouldn’t dismiss those who protest peacefully because of the senselessness of those who don’t. The pain behind those legitimate protests is real, and we must confront it with real dialogue and real prescriptions on issues like economic mobility and school achievement gaps.

… Our police department and black leaders have done the right kind of work to encourage dialogue. Our city and county officials care about fixing the core problems that plague distressed neighborhoods. So do many other Charlotteans.

… The riot should not be used to fuel a narrative that Black Lives Matter is in conflict with public safety. To preserve real law and order, police must be even-handed and respectful of all persons whom they protect and serve. They have to earn the public’s trust. At the same time, there’s no excuse for extreme actions that put innocent lives at risk and destroy property. Police, and the civilian authorities who oversee the police, deserve the chance to do the right thing in the right way.

The Greensboro City Council took a step for openness Tuesday, voting to release body-cam video of police misconduct that occurred in June and led to an officer’s resignation. When police are willing to reveal mistakes, trust is strengthened.

Charlotte, like Greensboro, has been harmed by the effects of McCrory’s HB 2. It’s cost both cities ACC and NCAA events.

Lack of trust for police can hurt, too — even when the police aren’t wrong.