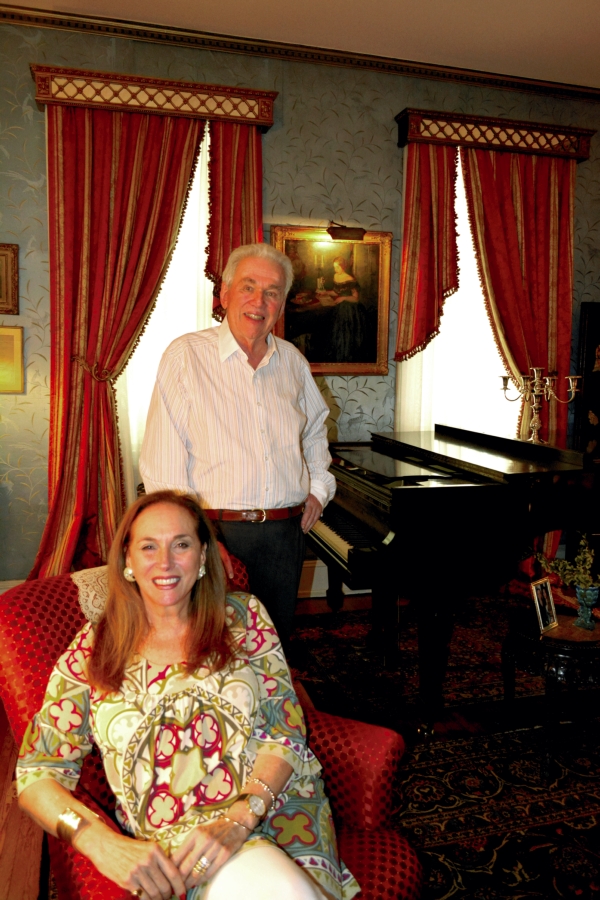 Charlie and Rachel are longtime lovers of music, one of several reasons Charlie is chairing the Salisbury Symphony Orchestra’s 50th anniversary committee. Susan Shinn / for the Salisbury Post.

Eight years ago, Charlie and Rachel Bernheim were on their way to Salisbury from New York City when Charlie’s heart stopped and he crashed their car into a tree.

Rachel walked away without a scratch, but Charlie was airlifted to Richmond — the Bernheims were just north of the North Carolina border — and spent the next 25 days in a medically induced coma.

When Charlie recovered, Rachel’s cousin, Mona Wallace, sent a plane to bring the couple back to Salisbury, and Ott and Julie Pinkston were waiting for them at the airport.

“For the next six weeks, we never prepared a meal here,” Rachel says. “People brought food. They brought books. Living in New York, Charlie had never seen that kind of affection.”

“It was more than support,” Charlie remembers. “It was genuine caring.”

Since then, he’s searched for a unique way to give back to the community.

He thinks he’s found it. Charlie, a new member of the board for the Salisbury Symphony Orchestra, has taken on the chairmanship of the symphony’s 50th anniversary celebration committee.

“I thought it would be a great way to give back something to this community that had been so great to me,” Charlie says.

The couple still returns to New York from time to time, where Charlie has kept an apartment for years.

“It’s so wonderful to come down here and have as many friends as we have,” he says.

Charlie is definitely up to the task at hand.

“I was brought up in a very philanthropic family,” he says. “When my mother was 70, she sat on 14 charity boards in New York City. Not only did she raise funds, she helped develop programs.”

Her mantra was, “If you don’t ask, you don’t get,” and Charlie has claimed that for his own.

“So now we’re asking,” he says, on behalf of the symphony.

A retired broker, Charlie has set about the project with gusto. He has two goals for the symphony. First, to raise enough money to cover all expenses for the 50th anniversary year: seven concerts, plus the education program in the schools. That totals $430,000, and half of that has already been raised, he says.

Secondly, Charlie wants to increase the symphony’s endowment from $700,000 to $1 million.

That will help increase the salaries of orchestra personnel. Charlie notes that $75,000 has already been raised toward that endeavor.

“We’re building the future of the symphony for the next 50 years,” he says.

“The symphony is just one aspect of a community’s pride and identity,” Maestro David Hagy says. “People in Salisbury are proud of the fact that there’s a symphony here. So Charlie’s help and knowledge and enthusiasm are absolutely invaluable to our 50th anniversary celebration.”

For donors who give $1,000 and up, the Bernheims will host a dinner — or perhaps a series of dinners — at their home on South Fulton Street. Rachel grew up in this house, which is filled with family photographs and mementos.

For more information about the Salisbury Symphony, call the symphony office at 704-637-4314 or visit www.salisburysymphony.org.