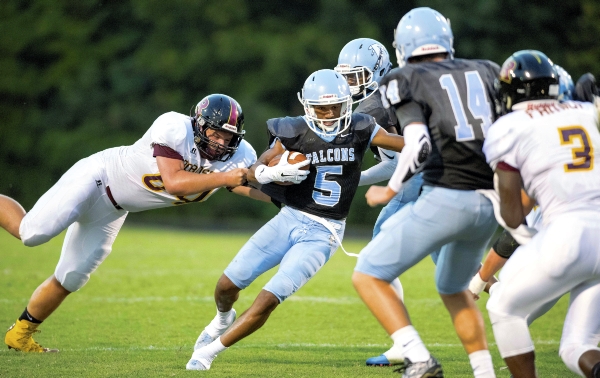 Prep football notebook for Week 4 …
It was another frustrating near-miss for South Rowan against Northwest Cabarrus, a team that edged the Raiders, 35-34, in a wild 2015 contest.
The Raiders lost this time, 21-20. They had an extra point blocked after they scored a touchdown to get within one point in the fourth quarter.
“We kicked the PAT there because there was enough time left that I felt like there would be more scoring,” South coach Daniel Yow said. “My gut instinct said to kick for the tie, and then we’ll score again and win it.”
Yow said an unfortunate injury to South’s return man Malaki Littlejohn (neck) — he was hit after muffing a punt — led to an extended stoppage of play when South had momentum and gave Northwest a chance to rest and regroup.
•••
South (0-3, 0-1 SPC) did enough offensively in the second half to give Yow confidence that it would keep putting points on the board.
“A lot of things were opening up for our quarterback (Austin Chrismon) to run the ball,” Yow said. “(Sophomore) Michael Sloop, one of our backs, didn’t have a big game stat-wise, but he made very good blocks fort Chrismon.”
Chrismon scored all 20 South points on three touchdown runs and a two-point conversion. South hadn’t had an individual score that many points in a game since Derrick Blackwell powered for five TDs in the 45-36 loss to Cox Mill in 2013.
South hadn’t had a quarterback rush for three touchdowns in a game since Mark McDaniel ran for four in a 32-14 win against North Iredell in 2010.
•••
Defensively, South didn’t give up anything in the air against Northwest and also turned in its stoutest game against the run.
“It was our best effort of the season in a lot of ways,” Yow said. “Especially in the second half.”
South got interceptions from senior safety Brandon Briggs and senior cornerback Grayson Bell. Bell also had a tackle for loss.
Eli Johnson, a senior outside linebacker, made 12 tackles and was recognized as the team’s defensive player of the week.

Carson
Carson’s Kotcamp twins, transfers from Mooresville, look so much alike that it’s difficult for the coaching staff to tell them apart.
They even have almost identical names — Gregory James Kotcamp and James Gregory Kotcamp.
Seriously.
“They went to the DMV to get their drivers licenses at the same time, and they got confused there too,” Carson coach Joe Pinyan said. “They had to go back a second time.”
James, a running back, and Greg, a receiver, are both making an impact. They’re juniors.
“They’re juniors, but they’re freshmen as far as being in our system,” Pinyan said. “But they’re learning and they’re good players.”
•••
Carson’s defense shined in the 31-14 win against Central Cabarrus.
“Our defense is still ahead of our offense,” Pinyan said. “We’re hanging our hats on the defense right now.”
Tackle Blake Daniels had eight tackles, one for loss. He knocked down a pass and recovered a fumble.
Nose Josh Malloy forced a fumble and recovered one. Tackle Matt Beaver had three tackles for loss. Cornerback Trey Sloop picked off a pass late in the game.
Linebacker Isaac Bell was in on 13 tackles. Linebacker Chandler Herring forced a fumble. Safety Cameron Rayfield turned in another solid game.
•••
Offensively, Carson (2-1, 1-0 SPC) didn’t get many yards against Central Cabarrus, but Pinyan saw progress.
“We were kind of null and void on offense, but I still saw us getting better,” Pinyan said. “We’ve just got to give our quarterback (Owen White) more time to throw. We were very close to making big plays on Friday.”
Carson has moved around a lot of offensive personnel in its first three games, especially Cole Sifford, who has played quarterback, fullback and halfback. Devin Youker, who started the season at quarterback, is now a receiver.
“It’s been musical chairs,” Pinyan said. “We’re trying to find that right combo.”
•••
Kicker Cole Howard boosted his career points total to 92 on Friday with a field goal and two extra points. Bell continues to excel as a long snapper.

West Rowan
West Rowan’s defense surrendered only 10 points in the 21-19 win against Robinson, and coach Joe Nixon had praise for that unit.
“We were facing a big-time pass offense and didn’t allow a completion in the second half,” Nixon said. “Devin Turner had a big game upfront, and all our DBs played well.”
•••
West (2-1, 1-0 SPC) controlled the ball most of the game, with Jovon Quarles pounding away, especially in the second half.
“Our offensive line has started to figure some things out,” Nixon said. “We did well enough to get off 88 snaps. We kept their offense off the field, and that was the gameplan.”
•••
Sophomore QB Payne Stolsworth threw for 196 yards in his first start.
Basically, it was his first high school football game. He didn’t play football as a freshman, and he made only a brief appearance in the loss to Davie County.
“Very happy with the way he took care of the ball and managed the game,” Nixon said.
•••
Kortez Weeks helped Stolsworth with some terrific catches. He had 10 grabs for 141 yards and two TDs, and he’ll again be the county’s best receiver if he can stay there.

North Rowan
North Rowan’s game with Davie was the head-knocker everyone expected. North lost, 7-6, and owned a defensive touchdown before it had managed an offensive first down.
North had not lost a game in which it held the opposition to so few points since a 7-0 loss to East Rowan in the 2009 season opener.
•••
Senior Keith Carroll made an acrobatic interception for the Cavaliers against Davie. He picked off two passes last season.
••••
The Cavaliers (3-1) have produced pick-sixes each of the last two weeks, with senior DB Chris Clodfelter accounting for a long one against Statesville and senior linebacker Victor Lyles adding a 17-yarder against Davie.
North’s defense has a number of players who could put the ball in the end zone before this season is done. In 2012, North had six different members of its defensive unit score at least one touchdown.
The breakdown on North’s 14 TDs so far — two on defense, two on special teams, five rushing and five passing.
•••
Senior defensive end Zion DeBose had three more sacks against Davie, bringing his season total to eight. The Appalachian State commit has had at least one in every game.
Senior linebacker Javin Goodine came back from having a thumbnail torn off in the Statesville game and was in on 13 tackles against Davie.

East Rowan
Max Wall rolled for 279 yards and three touchdowns in a 25-7 SPC win against Cox Mill. The yards piled up in bunches for Wall, who accumulated 250 on three long gallops of 89, 73 and 88.
It was the second-biggest rushing game in East history, behind Cal Hayes Jr.’s 344 yards against Robinson in 2001. The county record for a single game belongs to West Rowan’s K.P. Parks, who steamed for 356 yards against Carson in 2009.
Only 15 rushing games in county history have been recorded by the Post that surpassed Wall’s effort on Friday, and that’s including two that go way, way back. Landis’ Billy Ray Barnes had 303 yards against Rockwell in 1952, and Pete Burleyson romped for 296 yards for China Grove against Landis in 1955.
Wall boosted his total in four varsity seasons to 40 touchdowns.
•••
Senior quarterback/punter/kicker Tate Houpe was back in action against Cox Mill after missing two games. It was like getting three players healthy.
•••
Sophomores are playing well for East (2-2, 1-1 SPC). Linebacker Zack Simpson intercepted his second pass. Gabe Hinceman pounced on his second fumble recovery. David Broaddus pushed past 100 rushing yards for the season and scored his second TD.

Salisbury
The Hornets (1-3) did OK against undefeated 4A Lake Norman on the road. Salisbury was expected to lose by 40 or so. The 35-14 loss was more than respectable.
Salisbury’s defense held Lake Norman below its normal passing numbers, both running and throwing.
•••
Cameron Horne got his first significant look as a ballcarrier and punched out 48 yards in seven carries. Nick Austin, Trell Baker and Marcus Corry also enjoyed running success, as the Hornets posted 179 rushing yards.
Austin and Baker got TDs. The TD was Baker’s fourth of the season, making him one of the county leaders.
•••
Will Taylor made his first catch of the season — for 37 yards.
•••
Salisbury’s defense had produced 11 turnovers in the Hornets’ first three games but couldn’t get a turnover against Lake Norman.
•••
Salisbury will have a better chance at home this week against 3A Ledford. Ledford is 2-2, with the wins coming against Central Carolina Conference teams West Davidson and East Davidson.
Ledford, a rural Davidson County school, will be returning to 2A and the CCC next fall.

Davie County
Davie linebacker Broc Barnette may consider a name change to “Block” Barnette.
He blocked a punt against West Rowan and blocked a PAT that turned out to be a difference-maker in the War Eagles’ 7-6 victory against North Rowan.
•••
Davie hadn’t won a game in which it scored so few points since it managed to beat North Forsyth, 3-0, in 2007.
Davie was the first team to keep North Rowan from scoring an offensive TD since Salisbury beat the Cavaliers, 19-7, in 2012. North’s TD in that one came on a punt return.
•••
Davie (3-1) plays a non-conference game against struggling Hopewell on Friday and likely will again rest quarterback Chris Reynolds with the idea of having him healthy for the start of CPC play against R.J. Reynolds on Sept. 23.
Best-case scenario, receiver Cooper Wall (ribs) also will be back for Reynolds, although it’s likely to take longer than that.
•••
Davie DB Hite Merrifield’s brother, Whit, is starting at second base for the Kansas City Royals.
•••
With Wall and Reynolds out for the North game, Davie got big performances from freshman running back Adrian Cranfill and junior receiver Mason Wilson.

A.L. Brown
The late Dan Dayvault, who was quarterbacking the Wonders 50 years ago, was named to the latest Cabarrus County Hall of Fame class.
•••
A surprising 23-21 loss to Mooresville sent the Wonders tumbling from 21st to 57th in the MaxPreps state rankings.
•••
The Wonders had been impossible to run the ball against in their first three outings, but Mooresville senior Donshel Jetton rushed 34 times for 183 yards against the Wonders and broke an 81-yard scoring play.
•••
The Wonders are off this week, and that will give them some time to regroup for their MECKA opener at home against North Meck on Sept. 23.