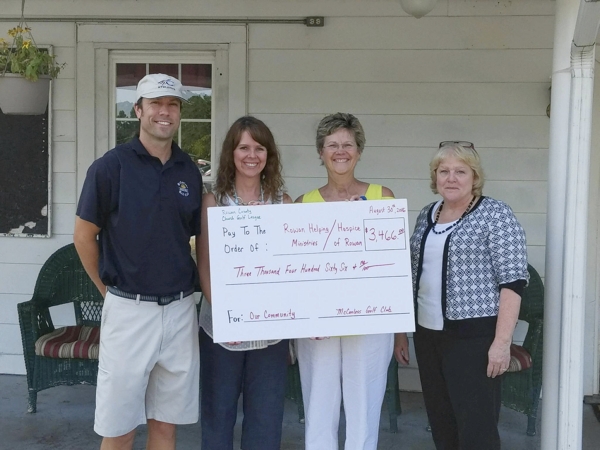 The Rowan County Church League set several records this summer as teams gathered weekly to play golf and raise funds to help those in need.

Seventeen teams played in the league, the most teams ever in its 11-year history. The league logged another record, raising $3,466 for two local charities, Rowan Helping Ministries and Rowan Hospice & Palliative Care.

“This is the most we have ever raised for charities in the history of the league,” said Scott Perry, league founder and general manager of the league’s home course, McCanless Golf Club.  “That’s because we had more teams this year than we have ever had, we had good participation with donations and we had no rainout dates this year.”

Each year, league members select two charities to receive donations collected during the four-month league season. Perry also credits league member Ed Dupree with increasing donations this year with a new fundraising idea. Dupree collects score cards from golf courses across the state as he rates them for the North Carolina Golf Panel. This year, league members could make a donation to get a set of score cards, many from the state’s most prestigious private courses.

Perry said this year’s team play was the most competitive in history. The team from First United Methodist Church of Salisbury won the first half of the season, while a new team from South China Grove Baptist Church won the second half. The two teams played each other to determine the season champion but they tied, forcing them into a scorecard playoff. South China Grove Baptist Church emerged as the winner, Perry said.

Over the years, the church league has donated almost $22,000 to local charities, with Rowan Helping Ministries and Rowan Hospice and Palliative Care being chosen as beneficiaries for the past nine years, Perry said.

“It’s an interesting coincidence that both organizations are celebrating 30 years of service to the community this year,” he said. “And for one-third of the time they have existed, our church league has been supporting them.”

“We are blessed to have the support of our local churches and the golfers who play in the Rowan County Church League,” said Kyna Grubb, executive director of Rowan Helping Ministries. “Religious congregations are a vital source of financial, in-kind, and volunteer support for our organization. We could not exist without their involvement.”

Rowan Helping Ministries served nearly 88,000 meals through Jeannie’s Kitchen last year and provided 696,000 pounds of groceries in 20,048 visits to the food pantry by individuals or families.

Those in crisis received nearly $887,000 in financial assistance, and 516 guests were given a safe place to spend the night. The agency also provides practical life skills training for shelter guests and a transitional housing program for single parent families and individuals who are homeless but working.

“The contribution of $1,733 will be used, in full, to support patients and families in need of our care in Rowan and surrounding counties,” she said. “On any given day, our team is providing compassionate, professional hospice care to approximately 80 patients and their families. Our care is provided wherever our patients call home, whether in a private home, nursing home, assisted living facility, or in our Glenn A. Kiser Hospice House.”

The organization also provides advance healthcare planning workshops, at no charge, and grief counseling services to anyone in the community who has experienced the death of a loved one, regardless of their connection to Rowan Hospice & Palliative Care.

As a nonprofit organization, Rowan Hospice & Palliative Care relies, in part, on contributions to carry out its mission of providing quality medical, emotional, spiritual and social support to patients and their families so that they can live fully and comfortably in their final months.

The Rowan County Church Golf League plays May through August. Those interested in joining the league can contact Perry at 704-637-1235 or MacGolf@bellsouth.net.