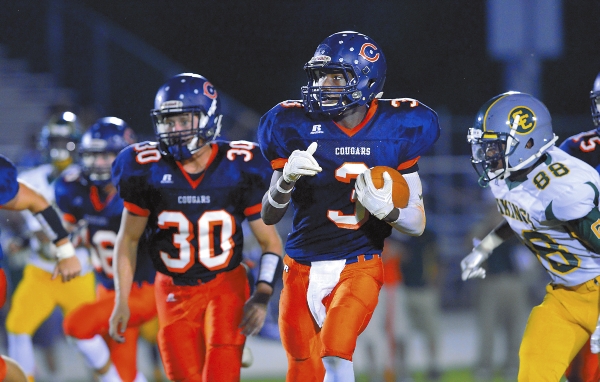 Wayne Hinshaw /for the Salisbury Post Carson’s Brenden Westbrook (3) returns a pass interception for a TD in the third quarter against Central Cabarrus on Friday night. Carson won, 31-14.

The senior defensive back took matters into his own hands Friday night and sparked a 31-14 SPC victory against visiting Central Cabarrus.

“The plays I made changed the game,” Westbrook said, just moments after Carson (2-1 overall) opened its conference season by beating Central for the first time. “Now we have momentum on our side. All we have to do is keep our heads straight.”

Westbrook provided two perfect examples. He returned the second-half kickoff 76 yards for a touchdown that erased a 14-10 halftime deficit. Then on Central’s ensuing possession, the 6-foot-3 speedster intercepted a pass and romped 70 yards into the end zone for his third TD of the season.

“He’s the great equalizer in the back,” said fifth-year Carson coach Joe Pinyan. “If you throw it anywhere near him, he’s gonna go get it. He turned it around, all within a three-minute period. He just said, ‘This game is mine,’ and then went and took it.”

Westbrook was a difference-maker, helping turn Carson’s first-half sleeping dogs into second-half pit bulls. While its offense struggled — accumulating only eight first downs and 133 total yards — Carson’s defense forced four turnovers and limited Central (1-3, 0-2) to 112 yards in the second half.

“You’ve got to believe to achieve,” senior safety Cameron Rayfield said. “That’s what Pinyan told us. As a team we know we can win games. We’ve just got to push each other to play our best.”

Central’s best came in the first half, when quarterback Cameron Kepley and receiver Tristan Ryen hooked up on a couple of long touchdown passes. Carson answered with a short-field TD drive following a Blake Daniels fumble recovery and Cole Howard’s 22-yard field goal. But clearly, the guests were the better team in the first half.

“We were,” Central coach Donnie Kiefer said after the Vikings dropped their third straight decision. “But in the second half we all fell, each and every one of us. The big thing was the kickoff return and the interception that went for touchdowns back-to-back. That put us in a difficult situation very quickly, and we never got out of it.”

Pinyan may have been the better poker player as the third quarter unfolded. Central’s kickoff tumbled out of bounds, but instead of taking possession on its own 35-yard line, Carson accepted a five-yard penalty and forced the Vikings to re-kick.

“The same thing happened at the end of the half and we took the ball on the 35,” Pinyan explained. “When it happened again, (defensive coordinator) David Johnson said, ‘You need to make them kick that again.’ And I thought, he’s having a better game on defense than I’m having on offense, so I’m listening to him.”

Pinyan also instructed kick returner Bailey Rayfield and Westbrook to switch sides, moving Rayfield to center field and stationing Westbrook closer to the right sideline. Westbrook caught the kick on the 24, picked up a couple of blocks and turned on the jets, sprinting past a number of would-be tacklers.

“Yeah, first we kicked it out of bounds,” Kiefer lamented. “Then we kick right to the guy we didn’t want to. That was our fault, just poor kickoff coverage.”

Westbrook timed his burst perfectly, waiting for just the right moment to explode. “That’s another thing about short kickoffs,” said Pinyan. “You only need to make one guy miss. You don’t have to block as many because everything happens so much quicker.”

It happened again with 9:18 remaining in the third period. Facing second-and-10 from midfield, Kepley launched a pass downfield in Westbrook’s direction. The defender extended his body and went airborne like he was yanking down a rebound and grabbed a ball that may have been deflected. “I couldn’t tell,” he said. “We were in a cover-3 and I thought maybe it hit one of our spurs. But either way, I was in the right place at the right time.”

His long interception return pushed Carson ahead 24-14. The Cougars added an insurance touchdown shortly after sophomore Josh Malloy recovered a fumble in Central territory on the last play of the third quarter. Five snaps and a roughing-the-passer penalty later, fullback Cole Sifford bulldozed into the end zone on a 3-yard blast.

“We needed to play a good game,” Pinyan smiled afterward. “You know how before the season you draw a line and say theses are the teams we need to beat to finish in the top four? Well, this was one of them and we just beat them.”