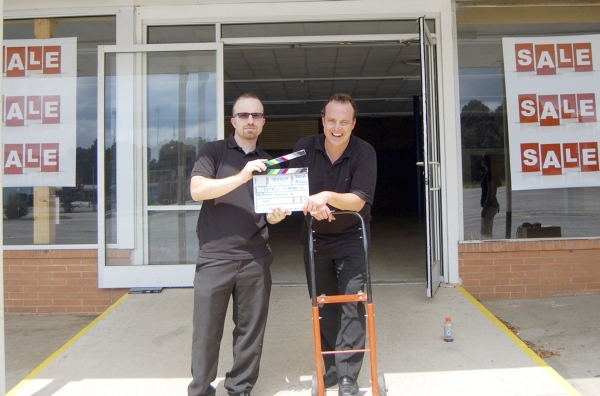 SALISBURY — Another film may soon be shot in Salisbury.

Brad Foster, a Salisbury resident for about six years, is raising money through a Kickstarter campaign to fund and shoot his first feature film.

Foster works in videography and editing in downtown Salisbury and is planning to shoot 85 percent of the scenes at a “downtown commercial location,” he stated in a letter.

His production company, started this year, is called Dreamency. The movie will be a rated R comedy called “Retail: A Retail Saga,” and follows two co-workers of a box store who “literally sell boxes.”

Foster graduated from the University of North Carolina at Greensboro with a bachelor’s degree in media studies. In an email, he said creating films has always been a goal for him.

“This film just feels natural since comedy is like second nature,” he wrote.

He also said he worked in the retail industry for 10 years before getting into marketing, from office supply to grocery stores.

Foster said showing the audience an experience they can relate to is what he loves about making films.

“The sense of fulfillment you get when a movie-goer finishes a movie and they just love, cheer, cry or can just simply relate to it,” he wrote. “It’s all about the audience, making sure you don’t forget that you’re building a relationship with them.”

Foster has a starring role, and so does Josh Wainright, marketing director and director of operations for the Piedmont Players Theatre. The film will be Foster and Wainright’s first feature film roles and Foster’s directoral debut.

Wainright said he met Foster after working with him for an industrial film about a year ago. Foster later told him about his dream to create the film.

Though Wainright has performed on stage, he said he had never been in a feature film.

Wainright said he is always up for trying something new and Foster’s passion for the film was contagious. Plus, Foster allowed him to have fun with his role in the industrial film and the same will probably happen for “Retail: A Retail Saga.”

There is a casting call for other characters in the film and Foster said he plans for 80 percent of the actors to be from Rowan County, mostly from the Meroney, Lee Street and Norvell theaters. He also plans to hire 70 percent of the crew from the county.

The movie is the first of a trilogy. Foster said the sequel will be “Corporate: A Retail Saga” and the third film will be “Black Friday: A Retail Saga.”

To donate to the film, visit http://kck.st/2crgRaj.