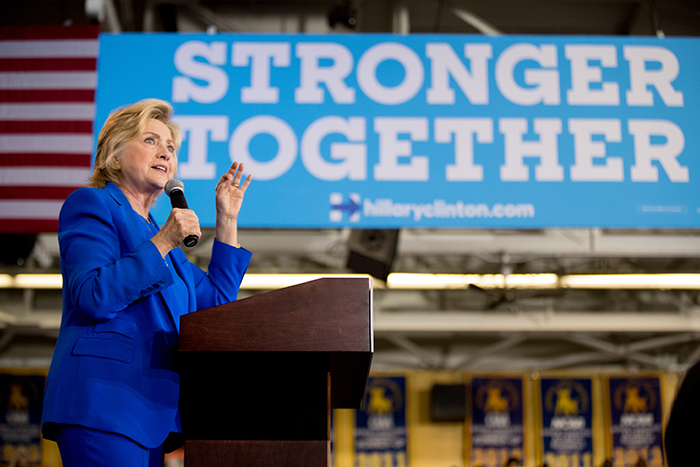 CHARLOTTE — Democratic presidential nominee Hillary Clinton on Thursday suggested that North Carolina voters should elect a new governor and U.S. senator because of recently enacted laws in the state.

During a rally at Johnson C. Smith University, Clinton dished out criticism of Gov. Pat McCrory and the state legislature for enacting measures such as the 2013 voter ID law and House Bill 2. Both have been mired in court battles and are among the most controversial items in North Carolina politics.

She gave a wide-ranging speech during her visit to Charlotte. Large portions were dedicated to criticizing Republican presidential nominee Donald Trump and touting her own credentials. At the start of her speech, however, she devoted several minutes to North Carolina politics.

On the 2013 voter ID law, recently struck down by a federal court, Clinton reiterated a point made by judges — the law targeted African-Americans “with almost surgical precision.” Clinton called the law a concerted effort to undermine the right to vote.

“Well, what’s the best way to repudiate that kind of underhanded, mean-spirited effort to deprive people of their votes?” Clinton asked the crowd at Johnson C. Smith University. “Get out and vote and make it clear we’re not putting up with that. These laws are a blast from the Jim Crow past, and they have no place in 21st century America.”

Clinton listed House Bill 2 as another example of a discriminatory law. She cited a decision by Paypal to cancel a 400-job project in Charlotte as proof that “others are not coming to this beautiful state because they don’t want to be associated with the discriminatory, bigoted policies of your governor and legislature.”

Less than an hour after Clinton’s speech ended, McCrory pushed back against Clinton’s criticism in a statement emailed media outlets across North Carolina. He said Clinton was using Democratic gubernatorial candidate “Roy Cooper’s lies” to distort the truth about common sense values.

“Now, one thing you can do about that is change your governor in November,” Clinton said. “And, while you’re at it, change one of your senators. We’re going to need reinforcements up in Washington. We got a big agenda.”

Clinton moved on quickly from local political issues to criticism of Republican presidential nominee Donald Trump. At one point, she keyed in on moments during a televised national security forum on Wednesday.

“What would Ronald Reagan say about a Republican nominee who attacks America’s generals and heaps praise on Russia’s president?” Clinton asked the crowd during her Thursday speech. “We’ve never seen anything like this.”

If elected, Clinton promised that she wouldn’t “trash our country’s most cherished values.” Perhaps speaking to any Republicans listening, Clinton said “it’s time to put country over party.”

“We have never been threatened as much by a single candidate running for president as we have been in this election,” Clinton said.

In an emailed statement, Trump’s North Carolina State Director Jason Simmons also pointed out some potential flaws in Clinton’s national security credentials. He specifically noted Clinton’s email scandal and raised questions about whether donations to the Clinton foundation resulted in any special access to the State Department.

Echoing the large, “stronger together” banners that hung nearby, Clinton wrapped up her speech by saying she would work to unify the country if elected president. It was a point that resonated with Charlotte resident Thomas Moore, who attended Thursday’s speech. Moore said he likes that Clinton is focused on working with others instead of trying to accomplish things without help.

“I think Donald Trump has spent too much time just hanging around people who think like he thinks,” Moore said. “He threatens people who have a different opinion, and so he doesn’t come to the table saying ‘let us work together to solve these problems.'”