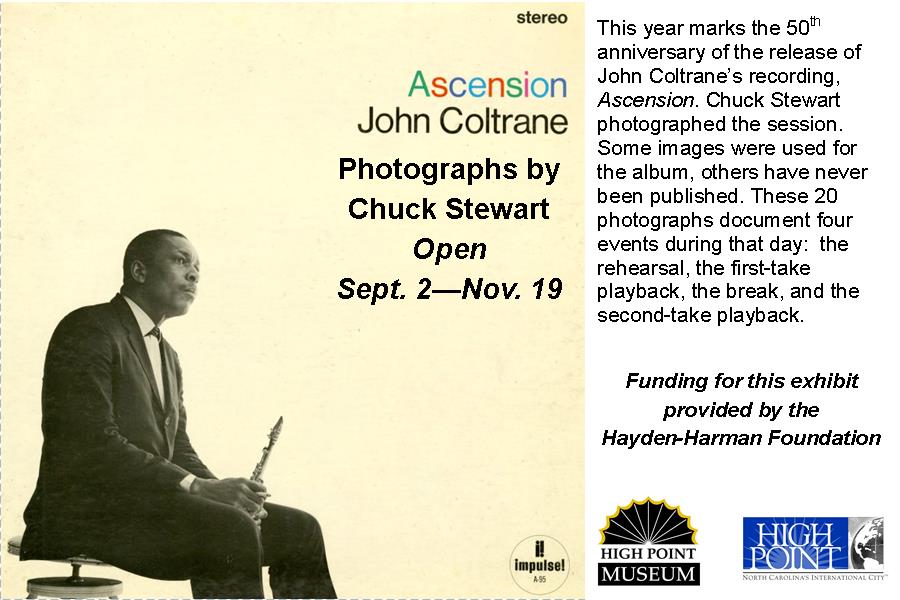 The recording session was shot by photographer Chuck Stewart. Some images were used for the album but others have never been published. The 20 photographs document four events during that day: the rehearsal, the first-take playback, the break and the second-take playback. Stewart did not take pictures during the actual recording.

Ascension, a powerful and controversial musical statement then, it is now considered a landmark in the development of jazz. Coltrane brought together a large ensemble for a studio session on June 28, 1965. They recorded only one song — a 40 minute long piece of music, divided over Side One and Side Two of a vinyl disc.

Stewart’s 70-year career of documenting music history is legend. He is known as one of the top photographers in jazz, responsible for over 2,000 album covers, as well as publicity photos of hundreds of musicians at concerts, in clubs and recording studios. Most notable are his album covers for Impulse Records in the 1950s and 1960s, Stewart also is responsible for many of our iconic images of America’s jazz musicians.

Funding for this exhibit provided by the Hayden-Harman Foundation.

The High Point Museum, a division of the High Point Public Library, is dedicated to sharing Greater High Point’s history, providing perspective for current issues, and strengthening the sense of community.

The City of High Point aims to serve as the catalyst for bringing together the community’s human, economic and civic resources for the purpose of creating the single most livable, safe and prosperous community in America. For more information on the City, visit www.highpointnc.gov