With its building in place, Country Life Museum set for a major fundraiser Sept. 10 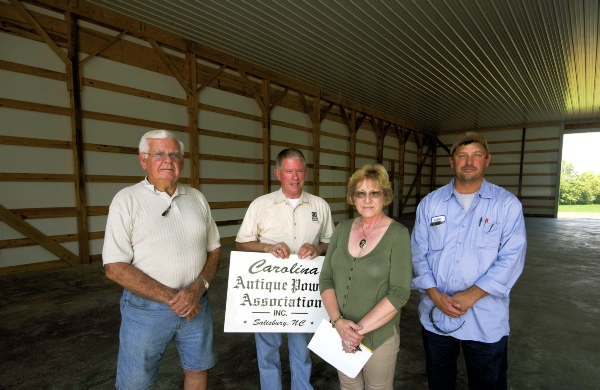 Dewey Bryan, Randy and Pam Elium and Eddie Mills stand in the new 4,800 square foot building at Sloan Park in the Millbridge community that is to become the Country Life Museum. The museum is long held dream of the members of the Carolina Antique Power Association. JON C. LAKEY / SALISBURY POST

MILLBRIDGE — This was a reality check.

“I told Dewey (Bryan), ‘Can you believe we’re standing in it?'” Pam Elium said. “It’s just hard to believe.”

As members of the Carolina Antique Power Association recently walked through the new 4,800-square-foot building with its 16-foot-high ceilings, they realized a 25-year-old dream was that much closer to coming true.

They picture this structure near the entrance to Sloan Park someday being filled with exhibits showing the way American farm families used to live and work.

Those high ceilings will hold all kinds of displays connected to rural life, and the newly poured concrete floor will be strong enough to hold things such as horse-drawn plows, a wide variety of tractors and just as many farm implements.

When it’s finished and open — hopefully sometime in 2017 — the Country Life Museum will be a place for students and adults. Its educational aspect is especially important to Randy Elium, president of the Carolina Antique Power Association.

“This is part of what I say: ‘Hold onto the past and reach for the future,'” he said.

Randy Elium wants children to know where their food comes from and how farming and rural life have changed over generations. Of the thousands of kids Elium envisions passing through the Country Life Museum, he thinks every now and then a boy or girl will see the technological advances — how things have progressed from here to there — and be inspired to think of  agricultural science and agri-business as a future career.

“We need young people interested in this field,” Elium said. “… They are the researchers of tomorrow.”

But first things first. CAPA still has some money to raise, and members plan a big event next Saturday, Sept. 10, at their new museum shell. “We have a lot of dedicated people,” Pam Elium said. “They all pull together as one team.”

The fundraiser will run 9 a.m.-4 p.m. — see the information box — and besides raising funds for the ongoing project, it will introduce more people to what’s planned for the Country Life Museum.

CAPA, which has non-profit status, was officially incorporated  in April 1993, and so began the members’ dream of establishing a Country Life Museum. CAPA didn’t approach the Rowan County Board of Commissioners with the idea until 2004, and more than a decade followed to reach this point.

“We just thought this would be an icon for the region up here,” Randy Elium said. “It has taken forever to get here.”

Elium described the new building as the “landing point, the beachhead.”

The group’s mission statement for the Country Life Museum says its purpose will be “to preserve, restore and demonstrate various aspects of the country life of the past.”

The statement continues: “The vision is to use exhibits to educate both present and future generations on the rural way of life of the American farm family.”

While it will be located in Rowan County, the museum also hopes to serve and draw visitors from neighboring counties such as Iredell, Davie, Davidson, Cabarrus, Stanly and Mecklenburg.

The Country Life Museum will rely on a growing collection of donated farm and country life items. One of the first pieces of farm equipment coming through the new building’s big garage doors will be a monster, articulated tractor restored by a collector years ago.

When the museum is up and running, CAPA will provide the volunteers to operate it. It also is responsible for all the building costs.

But the association has an official “memorandum of understanding” with Rowan County that says when the museum structure is complete and paid for, it becomes the property of the county and its Parks and Recreation Department.

“It is understood that the county will not be responsible for paying labor to open the museum for public visitation,” the memorandum adds.

Any future additions to the building will have to be approved by the recreation board and county commissioners. CAPA will have controlling interest of the Country Life Museum board of directors, while the county will be responsible for liability insurance, maintenance, repairs and upkeep.

CAPA has been a quiet force in the farm community for many years. It has conducted fundraisers in the past for three different families who faced large medical bills, and it also raised money to help replace a family barn that burned down.

Likewise, the community has come to the association’s help through donations and services rendered.

Farmers helped with grading the site for the new building. They also  provided equipment to haul 135 tons of stone onto the site, and others drilled in the grass seed. “People came out to do anything,” Randy Elium said. “… There are a lot of people who have been wanting this to happen.”

The CAPA members promise the museum will be kept fresh by having exhibits rotate in and out. They are receiving guidance from Rowan Museum Inc. on how to accept artifacts as gifts or loans. CAPA meets monthly, and until now members usually have met at someone’s house, usually at the Eliums.

About 20 to 25 people attend meetings.

But Friday evening, the group had its first gathering in the future museum.

“The group is not huge, but it has worked real hard together for a long time,” Randy Elium said.