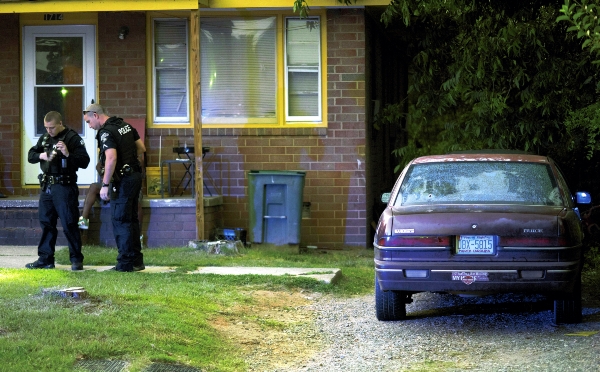 Police investigated after someone shot into a moving vehicle on North Long Street. It was one of four shootings within a 15-hour span Tuesday. Three were related, police say. Jon C. Lakey/Salisbury Post

SALISBURY — Salisbury Police Chief Jerry Stokes said he’s outraged at the four shootings that occurred Tuesday within a 15-hour period, and said the public should be angry, too.

Three of the shootings were related, he said.

Police responded to a shooting reported at 3:25 a.m. Tuesday at 322 W. C Ave., where the victim, William Scott Kerr Jr., was shot in both legs. Then at 3:38 a.m., police responded to 211 E. Bank St., where they found Amarillo Deshaun Bryant with a gunshot wound to the chest.

Police were called to a shooting at 6:33 p.m. at 409 E. Fisher St., where 16-year-old Timothy Little Jr. was shot in the upper rear thigh by a bullet during a fight between a number of other juveniles. Nearly an hour later, at 7:28 p.m., police went to 1714 N. Long St., where they say Eddie Floyd Bennett was grazed by a bullet.

Bennett told police another vehicle pulled alongside him, and someone fired several shots into his car as he was driving.

“I am personally, as the police chief, outraged and the police department is also outraged at these series of violent crimes that have occurred in the city in just a short period. The community, I’m sure as well, should be angry about the violence that is going on now over the summer,” Stokes said during a Wednesday press conference.

Stokes said the East Fisher Street incident is not related to the others. He also said the crimes are not gang-related.

“These do not appear to be crimes of opportunity, and the victims may have known the assailants in each of these cases,” Stokes said.

The cases are still under investigation. Other than the East Fisher Street shooting, there have been no arrests made in the other incidents.

Stokes said he is confident there will be an arrest in the future.

Stokes said officers were able to use tourniquets to administer lifesaving first aid to William Kerr, Jr., 31, who was involved in the West C Avenue shooting. Kerr is considered stable at this time. Amarillo Bryant, 34, who was shot in the East Bank Street incident, is also considered to be in stable condition.

He said Timothy Little Jr., 16, did not appear to be the intended victim in the East Fisher Street shooting. His injuries were not serious. The suspect, a 15-year-old male, was seen running from the area by police who were in the area. The officers were answering the call about shots being fired.

Police chased the teen on foot and during the chase he threw down a firearm. He was arrested and charged with firing into an occupied dwelling, possession of firearm by a minor, carrying a concealed weapon, assault with a deadly weapon inflicting serious injury with intent to kill, and violating the city’s firearms ordinance.

Stokes said investigators are working to piece together the motive in the shootings.

He said he’d like the community to partner with police to help resolve these crimes. Stokes added that no amount of information is too small, especially if someone may have seen or heard something that could be of value to the investigation.

Anyone with information is asked to contact police at 704-638-5333 or Crime Stoppers at 1-866-639-5245, or tips can be submitted online via http://tips.salisburyrowancrimestoppers.org/