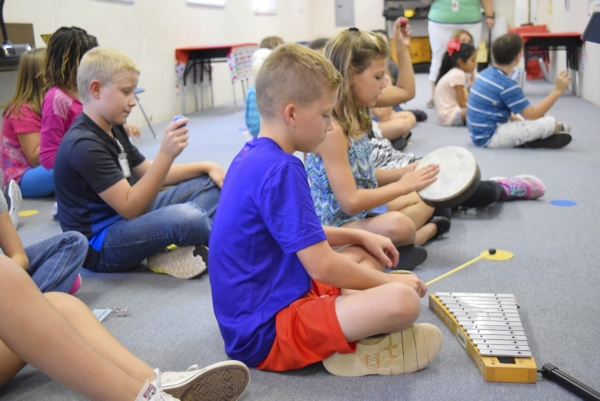 Gauge Scruggs, a fourth grader at Woodleaf Elementary, plays a glockenspiel in Trexler's class. Trexler said she wants to expand the instruments available to her students, and decided to crowdfund to do it. Rebecca Rider/Salisbury Post

WOODLEAF — Molly Trexler, a music teacher at Woodleaf and Cleveland elementaries, said that sometimes she feels like a celebrity. Students wave to her in the cafeteria and greet her in the hallways — they get excited about class. But their favorite thing is getting to play the school’s small supply of instruments.

“They love it,” Trexler said, “Their eyes light up.”

But after years of enthusiastic use, instruments wear out. Each school has its own stock of instruments, and while the inventory is a good start, it doesn’t cover everything.

“I feel like there are a lot of things our kids don’t get to use,” she said.

Being able to get hands-on in music by banging a drum or striking a glockenspiel turns a class into something fun and engaging. But there are a limited number of instruments, and in large classes the time each student can spend with an instrument can be severely limited.

Like many teachers, Trexler tries to supplement what she can — but she doesn’t always have much to work with.

“After paying my own personal expenses, it gets tight,” She said.

Teachers get $50 from the PTA, Trexler said, but that doesn’t really stretch to cover instruments, which can carry high price tags. So Trexler took to the internet.

She was inspired by seeing other teachers start crowd-funding campaigns, and decided to start her own using the website donorschoose.org. There Trexler was surprised to see the fundraiser was picked up by the Bill and Melinda Gates Foundation.

“It came up on Donors Choose,” Trexler said.

Trexler said she was surprised to see that donations to her project were being matched by the foundation, but then said she thought it was “really cool.”

“It gets us closer to our goal,” she said.

Trexler is trying to raise $1,082 to purchase 12 instruments for her classroom. The total cost of the instruments would be $814 before taxes and fees, but the project notes that additional funds, which make up the $1,082 goal, go to support the website — an option donors can opt out of when they support Trexler’s project.

“It’s not for me,” she said. “It’s for the kids. Not just the ones here but the ones in the future.”

Between Cleveland and Woodleaf, Trexler teaches roughly 600 students, kindergarten through fifth grade. She said that music is fun enough to provide a break from testing and mental work, but diverse enough to allow her to incorporate reading and math.

“It really enriches everything,” she said.

Those interested can donate to Trexler at https://www.donorschoose.org/we-teach/3099776/?active=true. The donation campaign is an all-or-nothing bid — the project must be fully funded by Dec. 18 for Trexler to receive her materials.