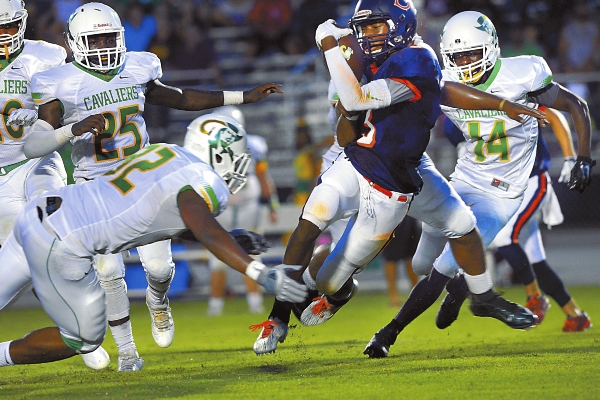 Prep football notebook …
Pittsburgh Steelers rookie Javon Hargrave holds the North Rowan and Rowan County records for fumble recoveries in a season (8 in 2009) and career (18).
North senior defensive end Zion DeBose has come out of the gate looking like he intends to threaten Hargrave’s season mark.
DeBose has made three fumble recoveries in North’s 2-0 start, including two in Friday’s 45-3 win at Carson.
DeBose, a 6-foot-3, 230-pound Appalachian State commit, also has been credited with three forced fumbles, five tackles for loss, three sacks and 10 quarterback hurries. In other words, he’s been a handful on defense — and on special teams.
North’s other defensive end, junior Darren Williams, also has been active with two sacks.
•••
While DeBose is the most spectacular North defender, the interior trio of nose Steven Thurston, tackle Matthew Hoosier and linebacker Javin Goodine is stuffing running games.
Goodine made nine solo tackles against Carson. Thurston was in on eight tackles and caused a fumble against Carson. Hoosier was quiet in the East Rowan game, but he got in on seven tackles against the Cougars.
•••
If you can run the ball successfully, that allows you to throw it, and the strong start to the season by North QB Corbin Smith (4 passing TDs, 1 rushing TD) has been fueled by a North running game spearheaded by county rushing leader Jaleel Webster, who has blasted for 217 yards.
“Our backs have been running hard, breaking through arm tackles,” North coach Ben Hampton said. “So far, we’ve had a pretty good 1-2 punch with the running game and the passing game.”
After two games, Smith has exceeded his TD pass total from last season when he had only three.
•••
Emerging as Smith’s go-to target is 6-foot-3 Alonzo Sirleaf. Sirleaf has a county-best three TD receptions, matching his total from all last season.

Carson
Carson used three quarterbacks in the first half of the 45-3 loss to North Rowan — Deven Youker, Cole Sifford and Owen White. That’s a sign that the Cougars, who were playing their first game, are still figuring things out.
“They all did some good things,” Carson coach Joe Pinyan said.
Youker, who started the game, is a good bet to take most of the snaps going forward. Sifford is the Cougars’ best fullback, and he’s needed to boost the running game.
White excelled at quarterback last year, but now he’s clearly the Cougars’ biggest threat at receiver.
•••
While the game with North Rowan swung on a kickoff return TD by Jaden Perry, Pinyan still felt that special teams, led by kicker/punter Cole Howard, were the Cougars’ strongest area on Friday.
Howard kicked a 45-yard field goal, the longest in school history. Howard also averaged nearly 40 yards on six punts, including one that he boomed out of his own end zone.
•••
Carson’s secondary had some highlights in the North game. D.J. Fulcher picked off a pass and veterans Andrew Jerman and Brenden Westbrook made a lot of plays.
•••
Pinyan was unpleasantly surprised that Carson didn’t fare better than it did.
“We’d looked pretty good in our scrimmages, but then we were off that first Friday, and then we came out and didn’t play well at all against North,” Pinyan said.

East Rowan
While most of the attention was on Max Wall, who broke the school rushing record in Friday’s 33-7 win against Salisbury, East’s defense played a big part in the victory.
“Our defense put our offense in good position all night,” East coach Kenneth McClamrock said.
Standouts for the East defense included outside linebacker Christian Bennett and defensive end Zack Simpson, who scored touchdowns.
Outside linebacker Colton Carico and defensive tackle Coy Ketchie also earned praise from coordinator John Fitz, and McClamrock added that tackle Devon Cherry had a strong second half.
•••
East Rowan’s Steven Hardin hasn’t been catching a lot of passes, but that’s mostly been because he’s been playing an increased role in the defensive backfield. He had a fumble recovery against Salisbury.
“We were rotating Steven with Max Wall on defense, but we really need Max to focus on offense,”
McClamrock said.
•••
East’s game at Concord has been moved up to tonight at 7 p.m. because of weather concerns. East is 3-39-1 against the Spiders all-time. East won in 1969, 1979 and 2009. Concord won 49-28 last season.

Salisbury
Coach Ryan Crowder said veteran defensive back Jaylen McDowell was a bright spot in the 33-7 loss to East Rowan.
•••
Tyquan Jones had some moments for the Hornets on Friday on runs and receptions.
Wearing No. 3, the senior was making his season debut, and he’s now back in the mix to get snaps at quarterback.

South Rowan
Daevonne Harris caught a touchdown pass from Austin Chrismon in the first quarter in South’s 65-7 loss to A.L. Brown on Friday.
That was progress. South was down 53-0 against the Wonders at halftime last season.
•••
South opened in 1961 and has played the Wonders every year since then, but this will be the last matchup in the series, at least for the immediate future, with South heading to a 10-team 2A league in 2017.
The Wonders lead the series 46-8-2.
South won in 1968, 1975, 1976, 1981, 1983, 1994, 2003 and 2009.
The A.L. Brown game was the biggest game for South for many years, and South was, for many years, the second-biggest game for the Wonders, next to Concord.
The rivalry peaked in terms of on-the-field quality as well as fan interest in the first half of the 1980s when the programs were evenly matched. The schools played tremendous overtime games three straight seasons from 1983-85.
But since South’s upset win of the Wonders in 2009, the Wonders have not only won seven straight, they’ve won all seven by at least 35 points, topping 60 points four times and outscoring the Raiders, 394-45.
•••
Austin Hyde had an interception for the Raiders on Friday.

A.L. Brown
The Wonders named players of the week for the 65-7 win against South Rowan.
Shyemere Scott only ran the ball three times, but he broke two for long touchdowns and was named offensive player of the week.
Scott, mostly a defensive back last season, is the Wonders’ leading rusher.
Najee Williams, a junior defensive end who blocked a punt for a safety, earned special teams honors.
Outside linebacker Denzel Fitzgerald led a defense that held South to under 100 total yards.
Strong safety Cinsere Allison made it 2-for-2 so far this season as far as racking up “Hit Man of the Week” awards.
Jeremy Davis, a 6-foot-2, 250-pound junior guard, led the way for the running game and received “Hawg of the Week” honors. Aaron Smith, a 6-1, 230-pound senior tackle, also starred on the offensive line and received the Captain Award.

West Rowan
West Rowan had scored in 186 consecutive games before it was shut out, 41-0, by Davie County on Friday.
The Falcons had not been blanked since losing to Mooresville, 35-0, in 2002.
West’s defense had shut out 36 opponents since the last time the Falcons were on the wrong end of a shutout.
•••
Davie forced nine West punts, and West’s punt team didn’t have a good night, averaging 20 yards per kick. Two short punts and a blocked punt helped Davie sprint from a 0-0 tie in the second quarter to a 21-0 lead.
•••
West’s defense did not play that badly. Davie rushed for 79 yards and threw for 159, well below what the War Eagles usually get through the air.
West coach Joe Nixon had praise for defensive linemen Devin Turner and Tyler Wheeler.
•••
Cornerback Deyquan Byrd, a returning All-South Piedmont Conference player, accounted for both turnovers the Falcons came up with. He had a fumble recovery and an interception.

Davie County
Davie is 2-0 for the first time since 2008, a year that it opened with victories against Watauga and West Rowan.
•••
Davie ended a seven-game slide against the Falcons with Friday’s 41-0 romp.
Davie’s win was the most lopsided in the series since Davie walloped the Falcons, 63-6, in 1965. That 1965 Davie team, with All-North Piedmont Conference players Randall Ward, David Robertson, Donald Beck, Edgar Osborne, Ronnie Spry, Ronnie Foster and Charles Eaton, went 10-0 in the regular season but lost to Asheboro in the Piedmont playoff game between the NPC and SPC champs.
•••
Linebacker Cody Hendrix had a game for the ages against West with 19 tackles. He was credited with eight tackles for loss.
Linebacker James Boyle was also destructive. He made 12 tackles, forced a fumble and scored a touchdown on a blocked punt.
•••
The shutout for Davie was the first for the War Eagles since they rolled against Parkland in 2013.