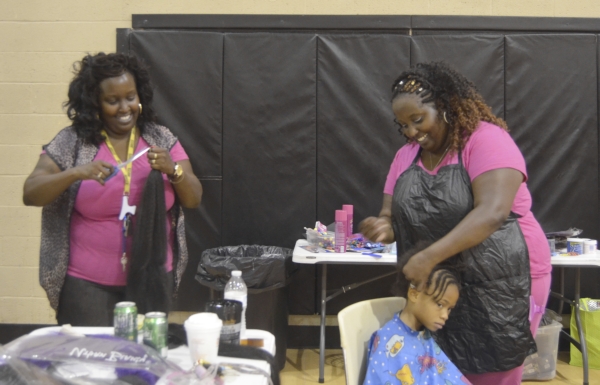 Shakeena Gadson, left, and twin sister Shanikka Gadson-Harris, right, are two of a set of twins including Shanna and Sherelle Pearson, who organized along with community partners, the TwinBlitz Back to School event held Saturday at Hall's Gym. There were about 26 stylists/barbers, including the sisters, who cut and styled 100s of children's hair. Shavonne Walker/Salisbury Post

SALISBURY — Shanikka Gadson-Harris and her twin Shakeena Gadson grew up in foster care and know what it’s like for a young girl to start the school year off not feeling beautiful. The sisters, together with twins Shanna and Sherelle Pearson, make up TwinBlitz, a styling team who have, for the past six years, co-organized an event where hair stylists and barbers come to their clients.

The event was sponsored by Community Partners of Rowan and was held at Hall’s Gym Saturday for the second time. The event was a way for children to receive a free hair style or cut along with school supplies, free food and a time to enjoy other activities.

Gadson-Harris said the idea began when they wanted to help young girls feel beautiful when they started school. So the sisters began offering hair styles to area children for free and it has grown to offering over 100 children a hairdo from more than 26 stylists and barbers.

If Vonda Woods, a single parent, had to pay for her child to get a hair cut or hair style, it would be costly, she said. The mother of four said she’s grateful to the group of local stylists who volunteered to do just that — take away the cost factor and just do hair.

Many of the young girls received braided styles, which Gadson-Harris estimated would take an hour in most cases. Much of what was used on the girls — including hair extensions, beads and other products — was donated by local salons and stylists.

Woods said she found out about the event through the city of Salisbury and other parents who were attending. She brought her niece, who spends much of her time with Woods, to get her hair done.

Woods’ daughter, ShaVonda, 16, was also getting her hair styled during the event.

Organizers start planning once the current year’s event is finished. Members of Kappa Alpha Psi Fraternity Inc. — Harry Standberry, Lee Howard, Chaz Davenport and Justice Marshall — volunteered their time to just hang out to play basketball with the children who were waiting.