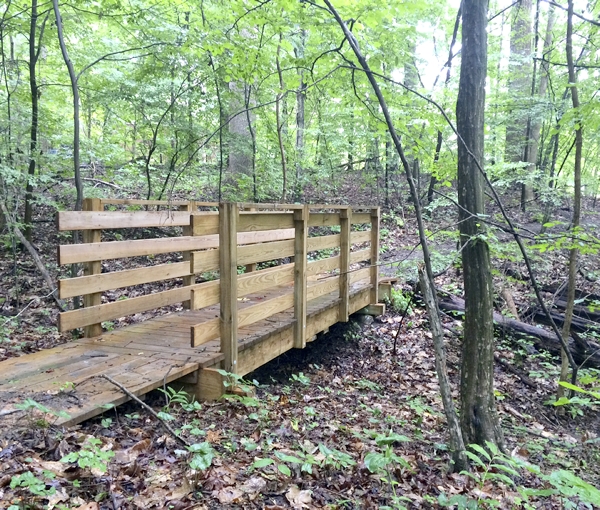 Submitted photo A bridge marks one of the trails in the Fred and Alice Stanback Educational Forest in Spencer.

The LandTrust for Central North Carolina announces the donation of two additional properties to the town of Spencer that will expand the Fred and Alice Stanback Educational Forest and Park. In addition to the transfer of the two properties, the entire park is now permanently protected by conservation easement with The LandTrust.

The park, also known as Spencer Woods, is a unique stand of predominately mature hardwood trees, many of which are 80 to 100 years old. The quality of the oak and hickory forest is excellent, with few cut stumps and invasive species present in the interior. Some of the north-facing slopes have a high diversity of plant species that thrive in nutrient-rich soils, such as black-cohosh, wild geranium and mayapple.

The park was originally acquired by The LandTrust in 2011 with the assistance of private donors. Through a partnership with the town of Spencer and the support of community members and volunteers, the vision for the park was set and it was developed with trails and trailhead signage.

In the summer of 2015, Mary Messinger donated a 5-acre property to The LandTrust, and The LandTrust purchased a 3-acre property from Howard and Louise Carter. These two properties were transferred to the town of Spencer on Aug. 16, and have brought the total size of the park to just over 52 acres.

“The addition of these two properties to the Fred and Alice Stanback Educational Forest are significant not only in that they expand the size of the park, but they increase public access points to the park and allow connectivity to the greenway along Grants Creek and to the Eighth Street Ball Park in Spencer,” said Executive Director Travis Morehead. “The park trails can now be expanded to provide more recreational opportunities to Spencer residents and visitors.”

“Through generous staff support from The LandTrust, substantial private donations, and a PARTF grant from the State of North Carolina, what some believed would take decades to build is now in its core developmental stage,” says Town Manager Reid Walters.