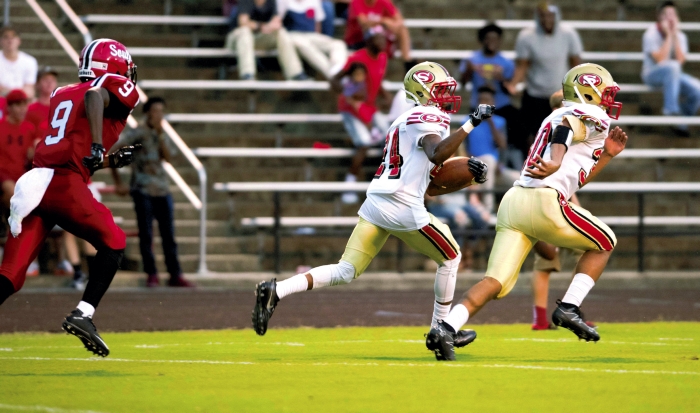 Jon C. Lakey/Salisbury Post ... Salisbury cornerback Tyvion Wood returns one of his two interceptions against South Rowan last Friday in Landis. Nick Austin (30) blocks for Wood, as they run down the sideline. Salisbury won the game, 33-9.

SALISBURY — In Friday’s 33-9 win at South Rowan, Salisbury’s defense came up with seven turnovers — the most the Hornets have produced in a game in the last 20 years.
Five of the turnovers were interceptions. Junior cornerback Tyvion Wood had two of those picks.
“Sometimes when you get interceptions it’s because you got pressure on the quarterback and he made a bad throw right to a defender,” Salisbury head coach Ryan Crowder said. “But the interceptions Tyvion got were just great plays by him.”
Wood is the county’s early leader in the “picks department” after not getting one all last season. He started for the Hornets as a sophomore and learned a lot from the other cornerback, Shaquez Strickland, a senior last season.
Now it’s Wood’s turn to be the sort of difference-maker that Strickland was.
“I came in and worked every day in the off-season,” Wood said. “I knew I was going to be counted on to make plays this year.”
Wood, who pronounces his first name Tie-vee-on, is physically equipped to make plays. He stands 5-foot-11 and has long, strong arms. While he looks like a shooting guard, most of his non-football sports background is in the jumps in track and field.
“He can really jump,” Crowder said. “When we do box jumps, he stands out. He can jump up on top of a truck. One of those interceptions he had Friday — he just went up and took it from the receiver.”
Wood modestly described his interceptions, although both were important. Both stopped South drives deep in Salisbury territory.
“Well, the first one, the quarterback was looking right at me, and I knew it was coming my way,” Wood said. “Then I just jumped for it. On the second one, I just kept my feet moving, the ball came my way again, and I made a good break on it.”
Wood, who played the “Hornet” position as a jayvee, also is an asset against the running game.
“My responsibility is outside containment, turning everything back in to the linebackers,” Wood said. “But South wasn’t looking to get outside much. They were running inside the tackles.”
While Wood experienced the growing pains that any sophomore varsity player is going to endure, those hard knocks should pay off for the Hornets — this season and next.
“He can cover, he can play man-to-man or zone, and he’s not afraid to tackle people,” Crowder said. “He’s just a junior, but experience-wise, he’s like a senior.”
Salisbury’s 2015 season was a disappointing 3-8 on the field, even with departed studs such as D.J. Alexander and Darius Jackson in the lineup. Then that 3-8 became 0-11 because of forfeits announced long after the season was over.
But now it’s a fresh start, and the Hornets are 1-0.
“We’ve got a defensive coordinator (former Davie assistant Mike Herndon) who is really hard on us and pushing us to get better,” Wood said. “But that’s a good thing. We got that first win that we needed and now we want the next one.”