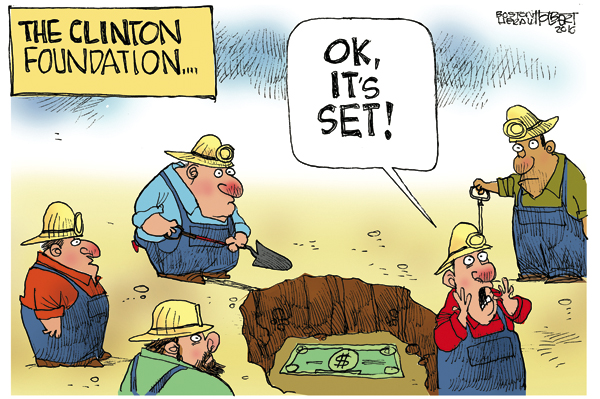 Following the best speech of his campaign, Donald Trump last week visited Louisiana to sympathize with people suffering from a catastrophic flood that killed 13 and left 60,000 homes badly damaged. President Barack Obama was meanwhile goofing off on a Martha’s Vineyard vacation, sometimes straining himself to play golf with millionaires as his supporters strained credulity with an excuse.

They said such big-name visits were a self-serving distraction from the hard recovery work going on, but considering that Obama could have at least given a short televised talk to the nation, this is as off-base as anything Trump himself has ever said. Trump’s visit did not distract from anything. Reports tell us he lifted spirits, especially as he helped unload a truck of goods for victims. Hillary Clinton, who repeated the distraction argument, did make a phone call to the state’s governor, no doubt helping him concentrate.

Trump aided the victims in other ways. When big-name folks make such visits, as Obama finally got around to Tuesday, news outlets pay extra attention to the story, in this case a tragic, heartbreaking one. That attention leads to increased awareness around the country, causing Americans to contribute more money. With this visit, Trump also helped himself politically, of course, at least hinting at a side of his character that appears to care about others.

Days before the visit, he also showed concern for others in a speech outside Milwaukee. As widely noted, it was a teleprompter speech that kept him on message and featured some unexpected particularities. For one, he said he regretted making comments in the past that may have caused pain. Humility not being his middle name, this nod astonished some. What also astonished them was concern he expressed about poor inner-city African-Americans.

It has been argued that the concern was not matched with specifics, and, true enough, he could have better fleshed out some remedies. But he did point to the overarching need for more jobs, and, in his calls for corporate tax cuts and reduced regulations, he expressed ideas that could help achieve that end. He also had an alert prescription for improved education of the disadvantaged — more charter schools and private-school vouchers.

The political value of all of this is not so much that he will win black votes but that he might come across as less the demagogue he seemed when he called for mass deportation of illegal immigrants and a ban on all new Muslim immigrants, positions he has since refined. Can this speech erase his clamorous, thoughtless, often vulgar, ignorant rants and remarks of the past? Of course not. But on top of other more reasoned speeches he gave before that, it might make him seem a more serious, more caring, more trustworthy candidate — if he can keep it up.

That’s a big “if,” regularly growing bigger. Just recently, on Fox News’ Bill O’Reilly show, the host asked Trump how he would bring about law and order in the inner city. By getting tough, Trump said, leaving out some solid proposals in his speech. But exactly how would this toughness be implemented, O’Reilly asked. Trump replied that he had met a tough cop who had said he could clear up the violent crime in Chicago in a week. But what were the specifics and how would Trump get it to happen, O’Reilly asked. We’ll be tough, Trump answered.

Imagine Trump delivering theses lines, equally empty in content and thought, in the coming debates with Clinton. She is a person with a scary past and policy ideas that could give us a scarier future, but she is also smart, articulate and knowledgeable. She talks in complete sentences like an educated adult. Minus a teleprompter, Trump rarely does.

And Clinton, she can be tough. I mean tough, really tough.

Jay Ambrose is an op-ed columnist for Tribune News Service.