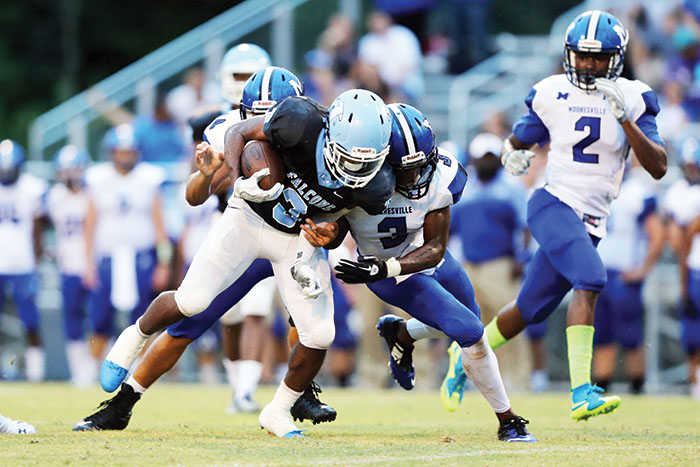 MOUNT ULLA — There’s nothing like taking a mid-term on the first day of class, but that’s what West Rowan’s season-opener felt like.

Of course, the Falcons were happy with the result — a 12-8 non-league victory over visiting Mooresville on Friday.

“Mooresville is always good,” head coach Joe Nixon said after West scored with less than two minutes remaining and prevailed. “And we always like to play in big-time games. Take one look at this crowd and you know it was a big-time win.”

An enthusiastic gathering thundered its approval as the Falcons took their only lead with 1:49 to play. Newly installed quarterback Kortez Weeks capped the game-winning drive when he rolled out to his left and spiraled a 9-yard touchdown pass to back-pedaling running back Jovon Quarles in the end zone.

“Jovon was running an out route,” Weeks said after completing 11 of 22 passes for 130 yards. “He was one-on-one with the safety and I was reading him all the way. He was the target on that play and he came up with the touchdown.”

West needed five plays to march 70 yards on the decisive drive — including a 50-yard completion from Weeks to senior Armoni Hogue into the red zone with 2:42 to go. “We had the lead and had the ball,” first-year Mooresville coach Marty Paxton said. “We were already planning our clock management. But they got it back and their kids made plays when they needed to.”

Quarles was a workhorse who rushed for 130 yards on 31 carries, but was an unlikely mark out of the backfield. “Well, it was a rollout,” he said with a post-game grin. “And I got open. There was a defender but I just outran him.”

Not to be overlooked was a West defense that yielded only 161 yards and three first downs. Mooresville’s offense was stymied on all but one play — it’s very first snap when quarterback Chris Murrell and wideout Davis Jay connected on a 68-yard touchdown play. It was the Blue Devils’ only completed pass.

“We watched film on them and knew if we out-disciplined them we’d win the game,” linebacker L.J. Robinson said after West forced five first-half punts. “That’s what happened.”

“Quarles is a special football player,” Nixon said. “We hope he can keeping building off what he did tonight and hope he gets even better.”

West ran 22 plays in Mooresville territory in the first two quarters and tied the score on one of them. It came with 2:02 remaining in the half, when junior Martavio Rankin took a handoff and bulldozed up the middle on a 23-yard TD run, tying the score 6-6 at the break. The guests penetrated as deep as the West 14-yard line in the third quarter, only to be thwarted by Robinson, defensive end Tyler Wheeler (2 sacks) and the rest of the Falcons’ dirt-eating defense.

“It got hard for us pretty quickly,” Paxton said. “Their defensive line made that happen. They were very physical up front.”

Yet, the Blue Devils managed to regain the lead midway through the fourth quarter on what both Nixon and West special teams coach Durwood Bynum implied was an accidentally-on-purpose safety. The Falcons were backed up inside their own 10-yard line, facing fourth-and-6 when a low snap skidded across the end zone and through the legs of punter Bryson Grissom. When the ball cleared the end line, Mooresville had itself an 8-6 lead.

“We wanted a safety in that situation,” Nixon explained. “Well, we didn’t want it, but if it was a bad snap we were going to take it. Then we could kick it off and play defense, which we did well all night.”

Bynum was concerned about Mooresville return man Donshel Jetton, a speed demon in the open field. “If we had given him a chance, he might have brought it back to the 20,” he said. “Two points (allowed) is better than six, so it worked out for us.”

So did the rest of the night. Mooresville’s final charge up the field was repelled when defensive backs Miles Poteat and Malcom Ingram swatted away passes on first, second and fourth downs.