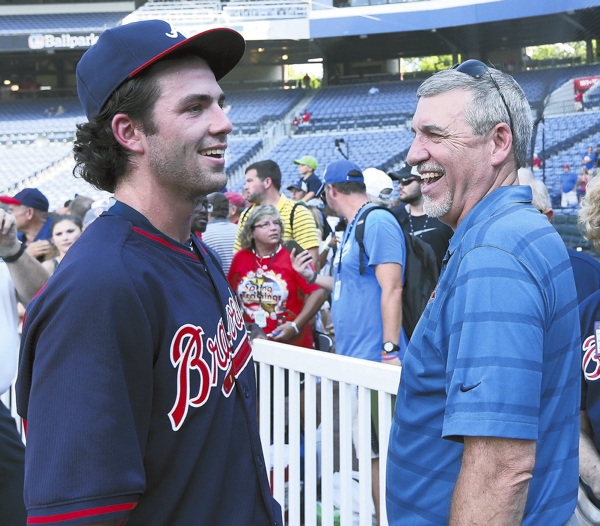 AP Photo/John Bazemore ... Atlanta Braves prospect Dansby Swanson laughs with his father, Cooter Swanson, before his scheduled major league debut in the team’s baseball game against the Minnesota Twins in Atlanta, Wednesday. Swanson was the first player picked in the 2015 draft, after a career at Vanderbilt University.

ATLANTA (AP) — Shortstop Dansby Swanson, born and raised in the north Atlanta suburbs, is making no promises to help turn around his hometown Braves.

Swanson, the Braves’ top prospect and the No. 1 overall draft pick of 2015, had his contract selected from Double-A Mississippi on Wednesday and was immediately put in the lineup batting eighth.

The sparse crowd at Turner Field, not unusual this season for the major leagues’ worst team, gave Swanson some loud cheers before and during the game. He walked up to his first at-bat with Ludacris’ “Georgia” playing over the speakers and received a standing ovation before lining out in the second inning.

“A lot of emotion, but it’s a good time,” Swanson said before Wednesday’s game against the Minnesota Twins. “I’m enjoying it and looking forward to everything Atlanta has to offer the next seven weeks.”

Swanson was running on adrenaline and excitement before the game.

After a six-hour drive from Jackson, Mississippi, on Tuesday night, he arrived at his parents’ home in Marietta at 2 a.m. Swanson got a couple hours of sleep, took a “surreal drive” to Turner Field and was the first player to arrive in the clubhouse around 11 a.m., spending 30 minutes talking with Brian Snitker in the interim manager’s office.

“He’s a very well-grounded kid, very intelligent,” Snitker said. “He gets it. The intangibles are just dripping off this young man, not to mention his athletic abilities as a baseball player.”

Atlanta created a spot on the 25-man roster for Swanson after trading shortstop Erick Aybar to Detroit on Tuesday night and designating Mike Aviles, the utility man acquired in the deal, for assignment.

Swanson was eager to get on the field and prove that he belongs in the big leagues. He was the first No. 1 overall pick to debut in the season following his draft year since Washington pitcher Stephen Strasburg in 2009.

Swanson was projected to fill a big spot at his position after Atlanta traded away Gold Glove shortstop Andrelton Simmons the month before.

Swanson spent just 127 games in the minors. The former Vanderbilt standout had a combined .275 average and nine homers and 55 RBIs in 105 games between Mississippi and Class A Carolina.

“This is a very smart kid and a good player,” Hart said. “However he performs up here, I think it’s going to be beneficial for him and for us as we go to make a decision to what we’re going to do with the shortstop position next year.”

Swanson said he was too young to remember his first game at Turner Field, but by the time he was old enough to pay attention, Braves star third baseman Chipper Jones made a lasting impression.

“Every time I came to a game, Chipper always hit a home run, like five different times,” Swanson said. “It was pretty spectacular.”

His family home will be even closer for Swanson next year as the Braves move into a new ballpark in Marietta.