Divide and conquer: The Waltons had children playing in championships on opposite sides of the country 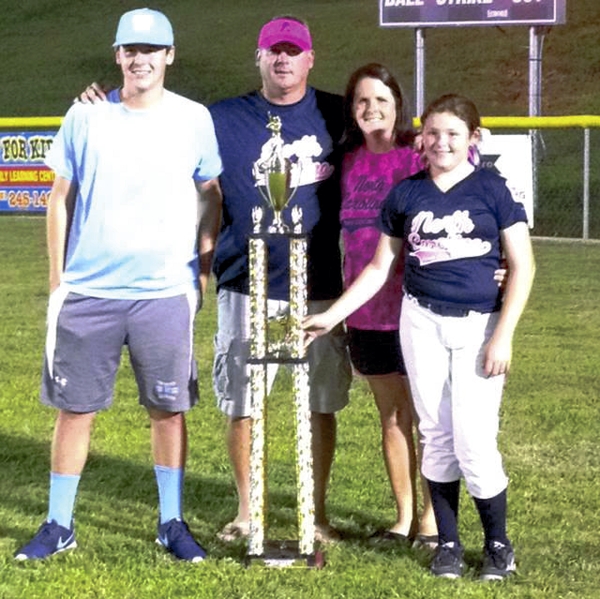 The Walton family in 2014: From left, Brandon, Alan, Kim and Taylor. Facebook photo

“It is what it is,” Walton said he told people who expressed anxiety over his particular situation. “But it’s a good problem to have.”

Tuesday night his son, Brandon, played in the American Legion Baseball World Series Championship game in Shelby. Alan was in the stands, rooting for the Rowan County team (N.C. champs) against Arkansas. The Rowan lads fell 8-6 in 12 innings.

On the other side of the country, near Portland, Ore., Walton’s daughter, Taylor, was pitching in the Little League Softball World Series semifinal game against New Jersey, a 3-0 victory for the Rowan team.

Taylor, a hard-throwing lefty, was coming off a no-hit victory over the Netherlands Monday, and she two-hit New Jersey Tuesday night.

Both games started at 7 p.m. Tuesday and were broadcast nationally. The American Legion baseball championship aired on ESPNU. The Little League Softball semifinal was broadcast on ESPN2.

Alan’s wife, Kim, is in Oregon with the 12U team from Rowan County, who like their Legion counterparts, are champions of both North Carolina and the Southeast.

Alan Walton understandably was going a bit stir crazy at his home Tuesday morning. Brandon has been staying with the rest of the team in Shelby since the World Series started last week. Likewise, Kim and Taylor have been gone almost a week for the softball World Series in Oregon.

He was a pretty lonely guy, and the whole ordeal is “very, very, very stressful,” Walton said. “… I hope it works out for both of them. It’s unbelievable, a dream come true.”

Alan stressed that his son and daughter were only playing in these important games because of the teammates with them. “I’m just happy for both of my kids and both of their teams,” he added.

Alan and Kim never really talked about this possibility — until it happened —  of their having Brandon and Taylor playing in their respective World Series games so far apart. How could they have known?

While Taylor was a member of the Little League team that won the world championship last year in Oregon and had a strong core coming back, the Rowan County American Legion team started out the season 10-7 and did not look as though it was a championship-caliber team.

“The Legion team started out slow,” Walton said. “We didn’t know what we had. … They have really, really played well.” To reach Tuesday night’s final, Rowan County beat the team from San Mateo, Calif., 13-4 Monday.

During the games Tuesday night, Alan and Kim texted each other back and forth with updates. Alan also had set his DVR at home to record the games, both of which he planned to watch when he returned home.

He had only been able to visit with Brandon about 30 minutes after each game in Shelby, He hoped his son would be able to come home with him after Tuesday night’s championship game. If the girls reach the World Series championship game again, don’t be surprised if Alan is on a plane to Oregon today.

The whole family was in Oregon last year for the World Series victory.

Walton is a teacher at North Rowan Middle School, where he is coach of the wrestling team and assistant coach of the baseball team. He played three years of American Legion baseball in the mid 1980s.

Brandon Walton will be a rising senior at West Rowan High. The lefthand-swinging batter has been the Rowan Legion team’s designated hitter and a relief pitcher on occasion.

Alan’s late father, Buddy, was a 43-year employee of the Salisbury Post. He also umpired and was part of the Cincinnati Reds’ scouting organization.

Alan Walton followed a routine of sending a pre-game text to both his son and daughter. He encouraged them, of course, told them how proud he was and tried to leave them with something instructional or inspirational.

But then it was back to his job of being a high-anxiety dad, waiting for the games to start.