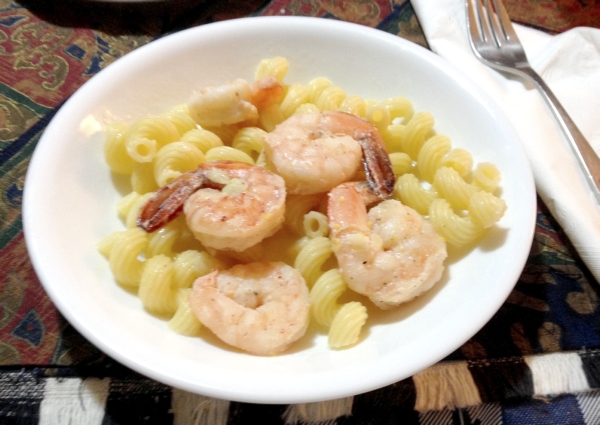 Stephen Smith/Salisbury Post Simple Shrimp Scampi cooks in minutes. With these jumbo shrimp, you only need about five shrimp per serving.

When you see a special on fresh shrimp at your supermarket or the place you buy seafood, take advantage of it. Shrimp is incredibly versatile, quick to cook and full of flavor.

It’s a good source of protein, too.

June through October are peak shrimp season in North Carolina, with plenty of sources providing the shellfish.

In North Carolina, you’ll find brown, white and pink shrimp. The pink are the earliest shrimp, caught in late spring and early summer, The browns come in July-September, and then you’ll find the whites in September, October and November.

Since we call small things shrimpy, you’d think colossal shrimp is an oxymoron, but it’s all relative. Keep in mind that a colossal shrimp is twice as large as a large, based on the count per pound. If eating shrimp as part of a dish that includes other ingredients, such as pasta, all you need of the16/20 shrimp are about five per person. If you’re using small shrimp, perhaps for a salad, 14 per serving is the equivalent.

Some people find smaller shrimp sweeter. Jumbo to colossal shrimp do well on the grill.

For a recipe where shrimp is the star, go for the lower counts-larger shrimp. For salads or delicate dishes, the higher count/smaller shrimp might be your best choice. Say you want a dainty shrimp salad on toast points, go small.

In general, any size shrimp you put in front of someone will be devoured in a short time, whether they are lightly boiled and dripping in cocktail sauce, fried Calabash-style or sitting pretty on a plate of pasta.

Back for 15-20 minutes, until shrimp are light pink. Start checking at 15 minute mark to be sure you don’t overcook them.

Serve them family style with toasted French bread to sop up the juice. From Locals Seafood and Bit & Grain.

zest and juice of 1 large lemon

Rinse the shrimp in cold water and pat dry. Season with salt and pepper.

Melt butter in a skillet large enough to hold the shrimp in a single layer. Add olive oil.

Sauté shrimp for 1 minute, then add garlic. Cook shrimp for another minute or two and remove from pan with a slotted spoon and put on a plate or in a bowl to keep warm. Add wine/lemon mixture to the pan and bring to a boil. Allow to boil 2-3 minutes, until slightly reduced. Return shrimp to pan, reduce heat and stir so sauce coats shrimp. Remove from heat and serve.

Serve over pasta, rice or a bed of baby spinach.

Melt butter or warm olive oil in a pan large enough to hold all the shrimp in one layer. Toss shrimp with Old Bay and sauté briefly, 2 to 3 minutes.

Remove from stove and cool completely.

Serve with your favorite cracker or on slices of toasted baguette.

Add the olive oil, salt and pepper to a bowl and combine well. Toss the spinach in the oil mixture, then evenly divide it between four serving bowls. Add the lime juice and honey to the same bowl and combine well. Add the peaches, onion and shrimp, tossing to coat. Arrange the peach mixture over the spinach in each bowl. Garnish the top of each salad with avocado slices.

From ”Shrimp,” by Jay Pierce, a Savor the South Cookbook.

Coarsely chop half the shrimp. Put the remaining shrimp in a food processor and pulse until smooth. Combine with cut up shrimp in a large bowl with the breadcrumbs, lemon juice, salt, garlic powder, pepper, scallions and egg and mix. Refrigerate 10 minutes and then form into four patties. Refrigerate 10 more minutes.

Heat the oil in a large, cast-iron skillet over medium-high heat. Cook the burgers about 3 minutes per side.

Mix the mayo and Old Bay to taste in a small bowl. Spread on buns, top with shrimp burgers and lettuce, tomato and avocado.

From Katie Lee of “The Kitchen.”