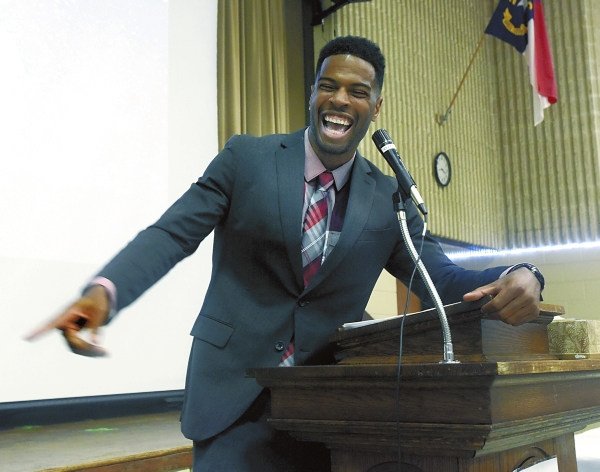 SALISBURY — The 16th annual Salisbury-Rowan Hall of Fame ceremony at the Civic Center was attended by the largest crowd in history, with most of the county’s public schools represented by a small army of coaches.
There was a table filled with North Rowan coaches to watch Bill Kesler’s induction. They sat next to a table crowded with South Rowan coaches and administrators, including former principal Jim Donnell. They were on hand to witness the induction of Reid Bradshaw.
A long table brimming with a whole family of terrific athletes — Hamptons, Nixons, Misenheimers and Whites — watched the induction of the late Darrell Misenheimer.
Ellis Alexander, who lives in Atlanta, was unable to attend, but a virtual reunion of his coaches convened to represent his induction, including Bill Cansler, his Knox Junior High coach, and Pete Stout, his head coach at Boyden High from 1968-70.
Alexander’s former teammates on hand included Hall of Famer Justus Everett and Gary Powers, who handed the baton to Alexander in the spring of 1971 on the mile relay team that ran 3:28.4 and broke the Western North Carolina High School Activities Association record.
There were many attendees with tight ties to Joseph Charles Price High, Salisbury’s school for African-American students prior to integration and the home of some of the county’s greatest football teams.
Inductees Ernest McCray and the late James Bridges played for the Red Devils on powerful teams guided by S.W. Lancaster, who still leads the county’s all-time wins list.
The largest contingent of all came from West Rowan to view the induction of the Hall’s youngest member, 35-year-old Scooter Sherrill. Sherrill’s middle school coach, Erich Epps, and both of his high school head coaches, Bob Shipwash and Mike Gurley, were present.
Wilson Cherry, head of the 15-person Hall of Fame committee, served as master of ceremonies.
Ellis Alexander’s older brother, Jake, who taught him how to kick, conveyed his brother’s emotional acceptance speech to the audience on Sunday.
An outstanding linebacker at Boyden, Ellis’ ability to kick carved him out a role on the University of North Carolina football teams of the early 1970s, and he set records.
The Morehead Scholar led the Tar Heels in scoring two seasons. He kicked a game-winning PAT against Duke, booted a 53-yard field goal against N.C. State and still ranks among the top 20 all-time scorers at UNC with 148 points.

Accepting Misenheimer’s award were his widow, Cathy, and son, Danny. Cathy spoke about a gentle giant “who would give anyone who was in need the shirt off his back.” Misenheimer’s shot put throw of 61 feet, 5 1/2 inches in 1975 is a Rowan County track record that may stand forever. He was a state runner-up as a heavyweight wrestler and a Shrine Bowl football lineman who went on to play for Clemson. Long after his playing days, he shared his knowledge with young players as a football assistant coach.

Bradshaw had a fine football playing career at South Rowan and Catawba where he learned from Hall of Famer Lope Linder and Catawba coaches Harvey Stratton and Don Maphis and developed confidence in his abilities.
Bradshaw’s boyhood dream was to coach, and he became a great one at South, constructing a dynasty in the mid-1970s. With players such as Hall of Famer Greg Poole, who attended Sunday’s event, Bradshaw’s teams went 67-20-4 in his final eight seasons, and he also enjoyed a strong five-year run as South’s baseball coach.

A good all-round athlete at West Rowan and a 1970 graduate, Kesler went on to become a fixture as North Rowan’s head baseball coach from 1985-2005. His Cavaliers won 295 games (second all-time for Rowan baseball coaches), and there was a trip to the 2A championship series in 2000, fueled by the left arm of Daniel Moore. In 1999-2000, North went 24-0 in the Central Carolina Conference.
In addition to his outstanding head-coaching career, Kesler continues to serve as a North assistant in multiple sports.
Kesler credited “a Hall of Fame wife” for most of his success.

Sherrill’s 2,469 points for the West Rowan basketball program is a Rowan County mark for male basketball players that hasn’t been seriously challenged since he graduated in 2000.
Second on the all-time list is Sherrill’s former teammate Donte Minter, who scored 2,087.
A McDonald’s All-American, Sherrill went on to become a starter for N.C. State and played pro ball overseas.
“I was fortunate because I knew what I wanted to do when I was 3 or 4,” Sherrill said. “Basketball took me to a good life, and I have no regrets.”

McCray, a speedy running back/linebacker, and Bridges, a tenacious lineman, were part of Lancaster’s J.C. Price powerhouse that went 22-1-2 from 1950-52. Both are in the J.C. Price Hall of Fame. Bridges is in the Livingstone Hall of Fame as well.
The Red Devils lost a fiercely fought all-classification state championship game to much larger Raleigh Booker T. Washington in 1950.
In 1951, the Red Devils were undefeated, but they had two scoreless ties and did not get an opportunity to play for a state championship. A commissioner’s ruling sent Hickory Ridgeview to represent the West in the state championship game, instead of Price.
Lancaster made it a point to schedule Hickory Ridgeview for the 1952 regular season, and, with McCray running wild, Price destroyed the Hickory school, 48-0, in one of the legendary games played by the Red Devils. That victory propelled Price to a state title that the Red Devils claimed in their hometown in frigid conditions against Tarboro Patillo.
Sunday was McCray’s birthday, and he was serenaded by the crowd. After his football days, McCray, known as “Mr. Touchdown,” went on to notable careers with the U.S. Navy and the fire department.
Bridges, who was represented by a number of family members on Sunday, moved on from Price to star at Livingstone. Then he had distinguished careers as a soldier, coach and educator.
Some of the extraordinary success achieved by the Boyden/Salisbury football and basketball teams in the late 1960s and early 1970s can be attributed to Bridges — and to the late Fred Evans. Price was closed in 1969, but they kept the spirit of the Red Devils alive.
“They’d been Price’s coaches, but they brought their players in,” Stout said. “They could’ve been resentful, but they weren’t. They helped everyone get along. They made it easier.”