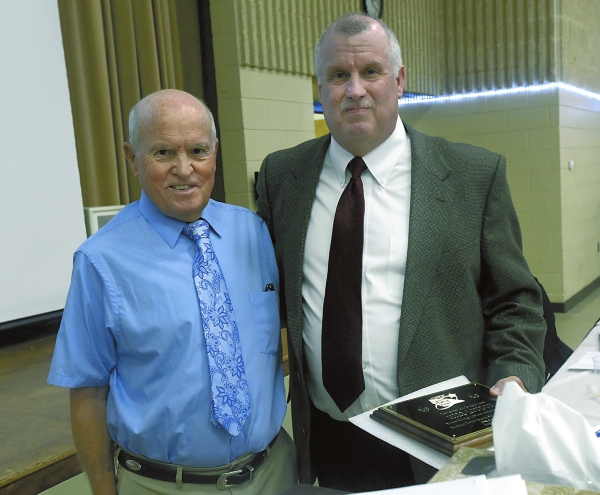 SALISBURY — Mike London and Floyd Kerr never expected to be where they were on Sunday afternoon — receiving lifetime achievement and service awards as part of the Salisbury-Rowan Sports Hall of Fame induction ceremony.

London, a sportswriter at the Salisbury Post since 1994, was presented the Horace Billings Lifetime Achievement Award. Billings was sports editor at the Post for 40 years, and worked another 10 years before retiring in 1998.

“Obviously, I never expected to be in a hall of fame, but to go in with the giants in this class, it’s certainly one of the proudest moments of my life,” said London.

London, a graduate of A.L. Brown High School and UNC-Chapel Hill, had always been a sports fan, due to his mother taking him to a Kannapolis American Legion baseball game when he was just 5 years old in 1961.

But after college, London worked in the food business, had a baseball card shop with friend Scott Maddox and later, was a teacher and coach at South Rowan High School.

“I was a very average athlete,” said London, in his usual self-deprecating style. “I could shoot a basketball, but I couldn’t guard a chair. And I was an even worse coach. I once coached a jayvee girls basketball game at South and didn’t call a timeout — because I forgot all about ’em. Fortunately, we won by two points.”

London’s career path changed in 1991 when he attended a World Series game between the Atlanta Braves and Minnesota Twins. He gave his impressions of the experience by telephone to Ed Dupree, the Post’s sports editor.

Dupree put London’s byline on the article and published it in the paper. He also saw London’s potential and recommended him a few years later to Mark Wineka, who had succeed Dupree as sports editor at the Post.

“There’s not many things that I’m good at, but I guess Ed found the one thing that I can do,” added London. “And I appreciate Mark taking a chance on me. My first assignment, a Salisbury High basketball doubleheader, Mark probably spent as much time editing those stories as I took writing them.”

Now, 22 years later, London is synonymous with the Salisbury Post’s sports coverage, especially of high school athletics. He has won numerous press association awards and has covered Rowan County and A.L. Brown state champions in 13 different sports. He was the N.C. High School Athletic Association’s media person of the year in 2011 and received the same honor from the N.C. Baseball Coaches Association in 2005.

“Mike is not only a great sportswriter, but he cares about youth leagues, middle school and high school sports, colleges and the professional ranks,” said Dupree. “He cares about it all and that’s unusual.”

In his acceptance remarks, London, not surprisingly, talked more about his fellow inductees than himself, spouting off little-known facts of each individual.

“I guess there is a plan for all of us and thankfully, that plan worked out for me,” London said.

Kerr was likewise humble and honored to receive his award, especially being the first year that it was named in memory of Evans.

“It is such an honor to be the first honoree of the Evans Community Service Award because he was such a teacher, mentor, friend and advocate,” said Kerr.

A 1968 graduate of J.C. Price High School, Kerr began working for the city of Salisbury in 1971. He put together athletic programs for youth and had to coach many of the teams himself.

Wilson Cherry, co-chair of the Salisbury-Rowan Sports Hall of Fame and master of ceremonies on Sunday, praised the career of Kerr, while introducing him.

“Floyd was a big boy when I was a little boy,” said Cherry. “He was an outstanding coach and mentor for us all. He was always there, telling us, ‘do the right thing.'”

Kerr recalled that Evans put him in charge of Lincoln Park Pool, now also named for Evans. “I had no idea what to do at first, but Mr. Evans said to ‘just do things right and watch those kids.'”

Kerr said that after one summer, he was not real sure that he wanted to keep working at the pool in the future. But Evans impressed upon Kerr that if someone didn’t step up at the pool, that it could be filled in with dirt and a lot of children would miss out on swimming.

Kerr also was a staple and found success at other venues.

“This award is significant because it meant that somebody, somewhere was listening and paying attention to what we were doing at Miller Center and Hall Gym,” added Kerr. “We tried to offer safe and fun programs for all of the youth and adults in our community.

“We had a junior basketball program that had over 900 youth in it,” he continued. “With fans, coaches and staff, we might have had 1,500 people involved. Of course, that meant 1,500 complaints, too.”

Kerr added that he was grateful that the late Bobby Sims asked him to be in charge of the gym before Sims’ death. “That put me in the NBA,” Kerr joked, “the Neighborhood Basketball Association.”