A brother comes home: After 35 years, siblings are reunited 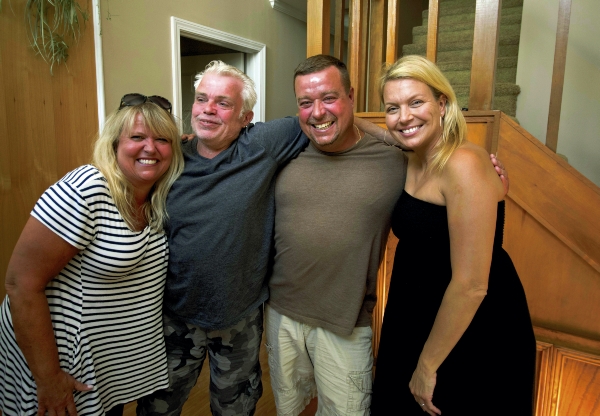 JON C. LAKEY / SALISBURY POST After 35 years Salisbury's Michael Linnane (middle right) and his two sisters Jeanne Rayne (far left) of Greensboro, and Janet Linger (far right), from Wilmington, finally made contact with their long lost brother Danny Schwinke (middle left), who lives in Berlin, Germany. Michael's wife Sherry was able to locate Danny via social media in May and after a two month waiting period for a passport, Danny has come to America to reconnect with his long lost siblings. Friday, August 12, 2016, in Salisbury, N.C.

SALISBURY — Through the years, Mike Linnane Jr. and his sisters regularly talked about their long-lost older brother, Danny, who they hadn’t seen since leaving Germany in 1981.

Where was he? Why couldn’t they find him? Was their mother alive?

The answers started coming at 5:42 a.m. May 6, when Danny Schwinke answered a Facebook friend request sent to him by Mike’s wife, Sherry. Danny also included this message:

“Hello, Sherry. I do not know who you are, but I have a great hope. Is your husband’s name Michael? Please say yes.”

Sherry was soon waking up Mike Jr. and yelling, “I found him, I found him!”

Things happened quickly after that. Mike Jr. and his sisters — Jeanne Rayne of Greensboro and Janet Linger of Wilmington — connected to Danny on social media, and soon Mike Jr. was calling Danny in Berlin.

“Brother,” Mike Jr. told him, “I’ve been looking for you for a long, long time.”

It took 35 years, but Danny Schwinke reunited with his siblings and their dad, who Danny immediately started calling “Pa” again, when he flew into the Piedmont Triad Airport in Greensboro Aug. 3.

His arrival launched a month’s stay in the States for Danny, during which he is trying to spend extended periods with his sisters and their families, and Mike, production manager at Carolina Color in Salisbury.

The newly reunited clan, including Mike Sr. and his wife, Karen, from Browns Summit, spent Saturday at High Rock Lake. Mike and Janet both have homes on Dutch Second Creek.

Danny acknowledges the developments of the past few months and seeing everyone again have been overwhelming.

“This is another family,” says Danny, who has an ex-wife and two grown children back in Berlin. “It’s a big, big family. I love them all. They love me. I can feel it.”

A bonus to this reunion with Danny is that Mike Jr., Jeanne and Janet have learned their mother is still alive in Berlin. She is 70 now, and they haven’t seen her in 44 years.

Thanks to the new connection with Danny, “I actually talked to her on Mother’s Day,” Mike Jr. says.

The conversation was a bit difficult because her English isn’t too good. Likewise, Mike Jr. says, “we can’t speak German like we used to.”

This is a complicated story, one born of an Army boy (Mike Linnane Sr.) meeting a German girl in Berlin (Mareanne) and their starting a family. The young girl already had a 1-year-old son, Danny, whose father was out of the picture.

After Mareanne became pregnant with Jeanne, she and Mike Sr. married. Janet and Mike Jr. were not too far behind. The four children were incredibly close in age, with only five years separating them.

Danny and Jeanne were born in Berlin, Janet at Fort Bragg, and Mike Jr. at Fort Benning, Ga. Before he headed off for Vietnam, Michael Linnane Sr. set up his family in an apartment in Boston, Mass.

In Vietnam, Michael Linnane Sr. was an Army Special Forces Green Beret, who would serve three tours in all. He was wounded — and received the Purple Heart — during his first tour and was sent to a Japanese hospital to recover.

Before heading back to his unit, an officer encouraged Linnane to take some time to return to the States and visit with his family. Mike Jr. says the best way to describe it today is that when his father walked into the apartment in Boston, there was another man there.

Linnane immediately shipped everyone — his wife and the four children — back to Germany before he returned to Vietnam. The marriage would not survive. Janet was sent to an aunt and uncle back in the States, and in 1972, Mike Sr. reached a settlement of sorts with Mareanne to allow Jeanne and Michael Jr. to join Janet.

Mareanne wanted Danny to stay with her, though Mike Sr. also tried to gain custody of him.

Mike Sr. had treated Danny, then 7, as his own from the time he was 1. But Mareanne insisted on Danny’s staying with her and changing his name so that it was no longer Linnane.

When Mike Jr. and Jeanne reached their aunt and uncle’s house in North Carolina, where Janet already was living, they couldn’t communicate with Janet. She was speaking English by then, and they were still speaking German.

Later, when their father came back to the States, he moved his family for a while to Fort Polk, La.

But Mike Sr. and the three children relocated back to Berlin for several more years, and on weekends they regularly visited Danny and his grandmother, though they never saw their mother again.

Mike’s Sr.’s sisters and brothers would visit the family in Berlin, and they also got to know Danny.

Toward the end of Mike Sr.’s 20-year Army career, he was assigned to the Presidio in San Francisco, meaning he had to move Jeanne, Janet and Mike Jr. away from their half-brother Danny one more time.

After his Army life was over, Michael Linnane Sr. relocated his family one last time and started a new real estate/property management career in Greensboro. Mike Jr. says he and his sisters stayed close but lost complete contact with Danny back in Germany as they all set out on their own adult lives.

But as they got older, conversations often came back to their half-brother, mother and all those questions. They had each other, and their close relationship made them feel bad for Danny.

“I think the devastation for him was deeper,” Janet says. “He was alone. He felt the impact. I just can’t imagine all of a sudden losing all of my siblings.”

At one point, Mike and his sisters told their father they wanted his help in finding Danny, but he was not successful, either. He once confided to Mike Jr. that even though all his Special Forces missions had been successful, “the only mission he never accomplished was bringing Danny home.”

Through the years, Mike Jr. and his sisters routinely tried to search for Danny online and particularly through social media. They didn’t learn until finding him that he had recently joined Facebook.

Danny has spent a good portion of his adult life as a cook. In fact, when Mike Jr. took him into a local Food Lion, Danny asked to be left alone for two hours just so he could take it in and see all the choices.

Danny worked as a cook for about 23 years — a job that meant he was working a lot of nights and holidays. His then wife persuaded him to be a stay-at-home father for their son and daughter, and he then became a maintenance man for the apartment complex in which he lives.

Danny’s children are 20 and 22 now. He sees them and his mother regularly.

Danny might have made it to the United States sooner, except his passport had expired. He also was in a bike accident that broke his jaw and some teeth. His new dental plate was not ready before he left for the States, so Mike Sr. arranged for Danny to see a dentist the day he arrived here.

“Michael took the ball and got it rolling for us,” Janet says of making everything happen. “He’s done a tremendous job.”

The siblings do a lot of kidding with each other. Mike and his sisters have given Danny a hard time about his gray hair and wardrobe — “look how we’ve Americanized him,” Jeanne says. They have been looking through some old photos and catching up on a lot of family information and memories on both sides of the ocean.

One thing Danny remembered from childhood was how good American pancakes were, so he wanted some of those. Mike Jr. reports his brother does not like grits, describing the Southern staple as “something an old man would eat through a straw.”

“You know what’s neat?” Janet says. “It hasn’t been awkward. Our hearts are all open to each other.”

Danny, who speaks and understands English well, says his heart started thumping in his chest when he first made the Facebook connection with Mike’s wife.

Until he arrived, Mike Jr. and Danny talked on the telephone about every other day. On Father’s Day, all four siblings were together — either in person or on the telephone — with Mike Sr. It was pretty emotional for everyone.

Time changes a person’s appearance, and the siblings confess they didn’t recognize Danny when he got off the plane. “Now I see the Danny I remember in his face,” Janet says.

Jeanne and her daughter already have taken Danny with them on a week’s vacation to St. Augustine, Fla. Janet will be his host for an upcoming week in Wilmington, and Mike Jr. wants his time with Danny, too.

Mike Sr. has a big cookout planned in Danny’s honor next weekend in Browns Summit.

“I don’t know what’s going to happen,” Mike Jr. says of the weeks Danny has left in America, “but I want Danny to live here forever.”