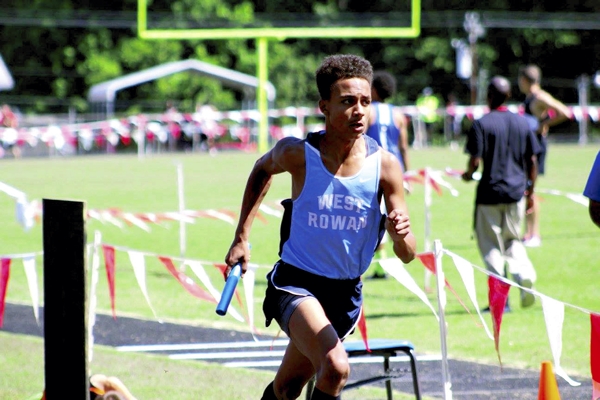 As you might expect, I am a huge Olympics fan and have spent countless hours already keeping up with the successes of the United States team. One of the most enjoyable parts of the whole Olympic coverage for me has been the individual stories about the athletes and how they came to find the success of making and competing on the team.

One of our local athletes took a giant step forward on Aug. 3 with a breakout performance in the Junior Olympics in Houston, Texas. Dating back to the mid-1960s, young athletes have been competing against others from around the U.S. in local, regional and national meets. Competition is age-group based and competitors are divided by gender into two-year age groups. Top performers are ranked based on prior qualifying times and the best square off against each other in the national meet.

YMCA Warriors coach and proud step dad Kevin Marsh summed up Burgess win when he said, “Andrew got a great start so he could get clear sight of the first steeple. He positioned himself in the top three to maintain a clear path. Andrew was the only one to consistently land the water jump with one foot in the water and one back on the track. He would gain ground each time over the water jump. Andrew made a surge at 400 meters remaining and cleanly cleared all the jumps to win by six seconds.” Burgess was third last year and returned to win this year with a time of 6 minutes, 27.90 seconds.

Now a seasoned competitor for the YMCA Warriors track and cross country teams, Burgess has two years of improvement so far with the West Rowan High School teams. I asked him a few questions about what has changed since his big win at the race in Houston.

Burgess, usually quiet and always humble, said, “Winning the race has opened my eyes to my future in running. Track is my passion and my dream is to make a career out of it.”

After trying many other sports, Burgess said he easily decided that track was the sport for him. He said, “I am very competitive so that any sport that I compete in, I am going to work hard to be my very best. Going to college on a scholarship has been my motivation for a couple of years now and hopefully this would offset the high cost of traveling around the country and going to these meets.”

After competing initially in the Junior Olympics at age 10, Burgess has set his sights high. That first competition garnered All-American status after a strong second place finish nationally. Already, Burgess is pointing toward next year when he will enter the oldest age group for Junior Olympics as a new 17 year old in the 17-18 age group. Burgess said, “I would love to win nationals again but it will be very tough as one of the youngest in the age division.”

Though he loves racing in club, school and open events, Burgess said, “My goal is always to win! This fall in school, I want to win Rowan County cross country and have our team qualify for the North Carolina championships.”

Running and racing isn’t everything since Burgess lists other interests as clothes, longboarding and video games. But he credits running, too. Burgess said, “Running helped me develop traits like mental toughness and self-discipline. If you set your mind to something, with hard work and dedication, you can achieve it!”

The United Way Sunset Run 5K is just around the corner on Sept. 2. It is a Friday night race, starting at 8 p.m. in front of the Rowan County Library. Look for 5K run/walk information at www.salisburyrowanrunners.org. The Salisbury Rowan Runners are managing the race this year and there might just be an Andrew Burgess sighting. From what I understand, his autographs are still free! Grab one while you can.

I hope you will join us at this great community event.