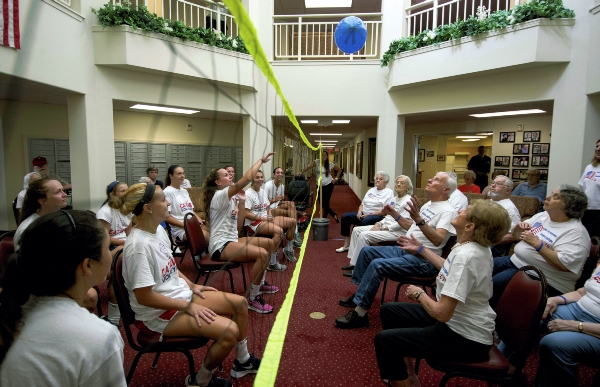 They were tall, athletic and even a bit sweaty, because they already had been through a morning practice. But how could they have known their biggest test of the day was sitting in the atrium, waiting to do battle?

The Catawba team squared off Friday in a chair volleyball match against the Oak Park residents, who play this game every Tuesday morning. Each side was allowed 10 players. The net was not quite 6 feet high. The volleyball was really a balloon, and the boundary lines were marked out on the floor with painter’s tape.

“The couches are out, and if you’re on the couch,” Oak Park Activities Director Karen Leonard said, looking directly at 97-year-old John Fisher, “you can’t hit it.”

Fisher would get his chance to play in the second game.

The Catawba College women realized quickly they were in for a game. Leonard had been working several months in arranging the match, which in recognition of the Olympics in Brazil was billed as “Rio 2016.”

Oak Park resident Cora Kirkman, a native of Brazil, was sitting nearby cheering on the retirement team, whose players already were decked out in their specially printed “Rio 2106” T-shirts from Ultimate Sports Apparel.

A U.S. flag was on the T-shirts and one also was hanging from the second-floor balcony above the chair volleyball court. Leonard tried to warn the Catawba players not to take the Oak Parkers too lightly.

The Catawba players found that out quickly. Though Catawba raced out to a 7-2 lead, the young women discovered that hitting a balloon and not being able to leave their seats evened things out. Soon that first game was tied at 7-7.

The Oak Park team had a home-court advantage. They know how to cope with the wind in the atrium that blows from the air-conditioning, and they’re used to their water bottles toppling over on the floor when they rotate to the next chair or reach low for a dig.

The Catawba women built a 10-7 lead and finally won by 11-9. In the second game,, with many new players on both sides, Oak Park built a 6-2 lead until the Catawba Indians came back and won 11-7.

‘Yes, they are good,” senior Catawba hitter Evan Schultz said. “It’s crazy their coordination. … We didn’t take it easy at all.”

The Oak Park residents appreciated the outside competition.

“I was surprised at how well we played,” Oak Park resident Martina Stonehouse said. “They didn’t give us any slack at all.”

Martha Hopkins, 85, said she was happy to prove to the Catawba girls she and her fellow Oak Park residents could give them a a good game, or two.

“After all,” Hopkins said, “they are a lot younger than we are. They are very good. I think they’ve done excellent, and I think we’ve done well, too.”

When sophomore Stevie DeSimone heard she was going to be playing chair volleyball at Oak Park, “I was so excited about it.,” she said.

The Catawba women who weren’t playing stood nearby taking a lot of photos and videos with their cellphones.

Meredith Furr, a Catawba senior, told the Oak Park residents that volleyball has been a huge part of the players’ lives since they were little, and it’s a sport they’ll still want to play when reach retirement age.

“I want to do this every time we play, and we’ve been doing this for five years,” Johnson said.

The Catawba women had scrimmages with high school teams and a 3:30 p.m. practice scheduled later in the day. Before they left, the women received gold medals from the Oak Park players, and they likewise hung medals around the necks of the residents.

Everyone also enjoyed some lemonade and cookies. Leonard made sure the Catawba players left with a gift bag of treats, red-white-and-blue friendship bracelets and the special “Rio 2016” T-shirts.

“We had a lot of fun,” Oak Park resident Ned Thomas said. “It was great.”