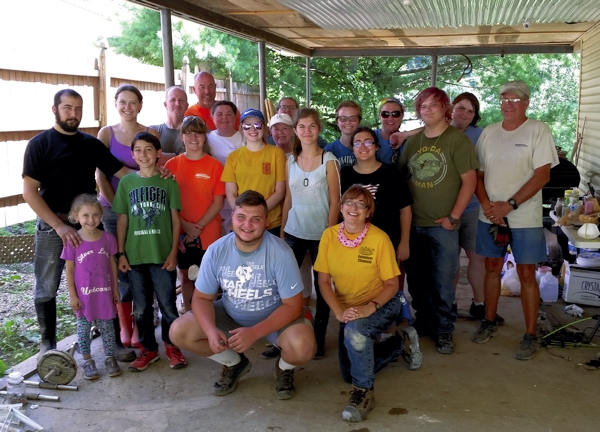 The members of CUMC plus Mike, Jennifer, Michael and Ariel, the family from Clendenin.

But on June 23, a torrential storm dumped 10 inches of water in the area, resulting in severe flooding.

The group’s assignment changed. They’d now be taking on the filthy, backbreaking job of flood repair.

It was a task they took on joyfully.

“I wanted to feel like I was making a difference,” said McKenzie Upright, a junior at Rowan County Early College. “I’m actually glad we ended up doing flood relief. I think we made more of a difference than building ramps.”

Over the week of July 24, the group helped do demolition on three separate homes in Clendenin, W. Va., one of which will probably have to be torn down. Hundreds of homes in the area were damaged or destroyed, according to Bob Blake, a native of West Virginia and one of the work team leaders.

The Christ UMC team stayed at a new elementary school about 30 minutes away, and showered at the local Y, Blake says. “And we needed it.”

The young people became proficient at wielding crowbars and other tools.

“We removed anything that could absorb water,” Blake says, from sheetrock to ceilings and floors. In one house, they even tore out the kitchen cabinets.

“We also cooked and served a meal at the local women’s shelter,” says the Rev. Jill Smith, the church’s pastor.

Every evening after supper, the youth led devotions. Blake was impressed with each one, he says. “We tried to pick scenic places to have our devotions. One night we went to the Charleston Amphitheatre, and another night, we went to the steps of the capital building. We wanted to show our kids some of the sites.”

Blake, who teaches at West Rowan High School, admits he was unsure about taking a group of young people on a mission trip. It didn’t take long for him to realize his apprehension was unfounded.

“Those kids worked so hard, and they were fun to work with, too,” he says.

Jessica Graham is a student a N.C. State University and Josie Vermillion attends Liberty University. Both are Early College graduates.

“I’ve always liked helping people, and I liked the group I was going with, so it was a win-win,” Graham says. “It was kind of dirty, but it was also really fun.”

Alex Jaynes, a 2016 West graduate, earned the nickname “Killer” because she used the crowbar so well.

“I heard about the flood in West Virginia,” she says, “and I wanted to see what the community was like.”

Vermillion has been on two other mission trips.

“I enjoyed both of them a lot,” she says, “because one of my spiritual gifts is serving.”

“I just wanted to help people get back in their homes,” says Treis McElroy, who attends Early College. “We basically demo’d houses.”

“It was really fun,” Graham adds, “but really hot.”

“I’m gonna tell you a little secret about these kids,” says Cheree McDaniel, one of their three advisers. “These kids are such hard workers, and they love to help people.”

That’s really not a secret now, is it?

McDaniel first started working with these kids seven years ago, she says, when she became a Sunday School teacher. “They hooked me. They have changed my life completely. They brought me closer to God and took off my blinders. They’re good kids.”

Bruce Shuping, another work group leader, has been on more than a dozen mission trips. When he worked for Norfolk Southern — he’s now retired — he dedicated a week of vacation to mission work.

“I think it’s about listening to God’s call,” he says. “Every one of us has some God-given talents. I have a good pair of hands, and a good brain to think things through.”

He, too, was impressed with the work ethic of the young people.

“There was no arguing, no fussing, no fighting,” he says. “They worked so hard. We all sweated together.”

Mission trips are always good trips, he adds. “You figure you’re going to give, but you receive.”

Because school will be starting soon, the number of volunteer groups is decreasing. Blake encourages other local volunteer groups to send teams to West Virginia. The group from Christ UMC worked with Mission Academy Ministries, whose Web site is missionacademy.net.

The Christ UMC team plans to return to the area next summer.