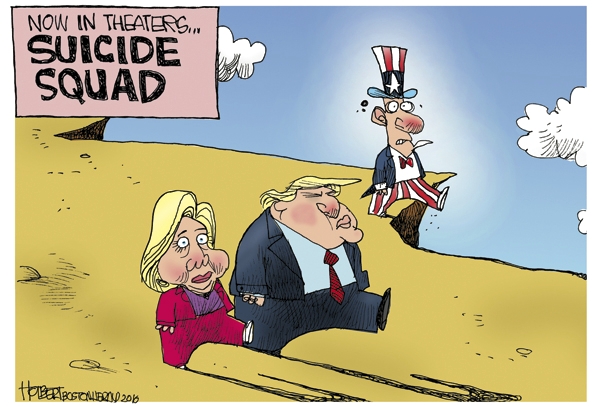 Robertson Foundation exercising their option on the downtown property for use as a park is a great contribution to the further development of downtown.

In drawing people to the park, this will likely draw more businesses, too. I do hope the need for parking is kept in mind, and I’m betting we’ll find the much-needed public restrooms in the plans.

What a wonderful idea. Many thanks to the Robertson Foundation for continuing to improve our city, our culture and our citizens.

My husband and I recently moved here. I am from Florida and he orginally from New York. We have been so pleasantly surprised by the diversity and commitment to community improvement. Kudos to the Robertson Family Foundation.

We just moved here from Florida as well and thought the very same thing. We know this city is going to be such a blessing to us and our families. I’m really happy to see a foundation that cares and is going to make this city even greater than it is!

This is a great opportunity to draw folks from out of town to visit Salisbury and bring new stores and restaurants. … If done right this could be the best thing to happen to Salisbury in years

How about including a world-class skateboard park within the central park? Big draw to both kids and out-of-towners.

Excellent insghts. If we concentrate on eliminating vacant housing, everyone benefits.

As a member of the Chestnut Hill Neighborhood Association Board, it is so frustrating to work to improve the neighborhood only to receive no assistance from absentee landlords, who prefer to keep tax valuations low. Can’t they see that improving neighborhood appearance would encourage longer term tenants and reduce turnover?

After spending so much money 43 years ago to make Lane Street a four-lane street, I do not agree that making it two lanes again will make it safer. Adding an island and traffic signals as well as closing the street to two lanes will only add to the congestion that occurs every time there is a back-up on I-85 (which is often) and offer more opportunities for traffic accidents.

As a resident on one of the streets that intersect Lane Street, I know access is difficult enough. Reducing the street to two lanes will make turning onto Lane Street even more difficult. This is not progress, but regression.

Not if you live in K-town. They have lost their minds, but none of the city’s top elite live out that way, either

What a huge mistake. As our areas grow we need to keep traffic moving, not backing up at each light along the way to appease a very small group of riders. Pave the road and put up “Welcome to Kannapolis Or Murdockville” signs and let it go at that.

I owe a large part of becoming UNC’s first female All-American in track and field to Al Wood’s friendship, advice, tough love and motivation. He was and remains an outstanding, unforgettable person.

Rowan County and all government entities should stay out of the commercial real estate business. All human services—  i.e., probation, parole, health and welfare, even Social Security, should be located in the Plaza, where those needing the services would have a one-stop shop. Plenty of parking.

… Director: Google Fiber is not competition

This is Fibrant propaganda. A lot of wishful thinking in this one. No mention of Fibrant’s basic service of 50 mbps that is half the speed of Google’s basic for the same price. No mention of Google’s state-of-the art network and equipment that will be more reliable. No mention of AT&T installing fiber in and around Salisbury. … Salisbury is throwing away money in an attempt to resuscitate a corpse. Google is great for North Carolina but the final nail for Fibrant. The game is over; might as well default and try to save the city.

Actually, the Fibrant infrastructure is enterprise quality, utilizing the best equipment available and is future-proofed for the foreseeable future. You are welcome to come and visit and see the infrastructure.

It is exciting for the likes of Google and other cities to partner with us, so that we can promote the region as a tech force. There are so many cities scrambling to get what we already have and are regretting having not invested earlier.

city director of broadband and infrastructure

This is good news for Fibrant, Salisbury and Rowan County. If more expansion of Fibrant can be made into the county, more people can take advantage of high-speed broadband that corporations will not provide.

Is it possible that the over-regulation of the vaping industry is lead by the Big Tobacco Lobby?

Yes. It is very possible. However, don’t forget that pharmaceutical companies play a role in this as well. Even insurance companies do. The industry is facing these regulations partially because this will slow these companies from making money.

If you are a legal citizen, there should be no problem with getting a picture ID. This way it stops voter fraud.

This completely flies in the face of legal precedent set by the U.S. Supreme Court. It will be interesting to see how this ultimately plays out, and/or if the NCGA re-writes the law to more closely pattern voter ID laws that have passed the auspices of the courts.

My dad was found on the voting books, last election, after being dead since 2003. Full name, birth date etc. except for the address. I don’t care what anyone says, voter ID is a great idea and should be upheld. If a person is legal, an ID should not be a problem.

Someone needs to report the death of an individual to the Board of Elections to be deleted. They do not always get these names in checking records. NOT voter fraud.

Beautifully and wonderfully written. It was insightful and gave a number of viewpoints from which to relate and think about.

Without communication there can be no solution. It’s going to be a long journey for all of us, but ultimately worth the trip. Thanks for the insight and the reminder.

A change in thinking is much needed right now in our country. This column brings to light what some already understand, what some have experienced and what some choose to ignore. There needs to be action once the mindset is changed, and then each life will truly matter.

Thanks for explaining a difficult thing well and making it accessible. It’s so difficult to explain to a person who doesn’t have affluence that they do indeed have privilege. It’s equally difficult to talk about it in such a way that people don’t feel like the target of blame. Again, well done. Your emphasis on understanding each other is absolutely on point.

I completely agree. Without a collective effort from everyone — and the halt of small distractions put in place to make us fight each other and not the system which causes the oppression — a new future will not happen. Great article and full of things that are pertinent for the time in which we live.

I hope you can bring some white people in for these communications. In Fayetteville, the Quaker House and NOW are having a series of conversations about “Cracking the Code,” and it’s getting great response from the black community, but without white people (like me) really being there to unpack our privilege, hear your stories, and help fix the systemic problems, there’s a limit to how effective this will all be.

So I challenge any white person who reads this: go to at least one group conversation, and leave with at least one concrete action that you can do to support our fellow humans.

To courageously engage is the challenge for our time and for our community. It requires seeking out and listening to voices which have been, or are perceived to have been, marginalized, ignored, overridden, under- valued, or simply out-voted by a system accustomed to hearing and listening to its own voice.

The challenge is on the table. How will the status quo system respond?

Can a dominant system which makes decisions for an entire community really take a chance, acknowledge that other voices, other opinions, other experiences and expertise may not look like what they are accustomed to — that there is value in creating opportunity for that which is not the status quo, not the same old?

… County wants new signs at I-85 entrance to Rowan

This county is in sore need of a makeover. … There is a need for improvements and ideas outside the box that this sign may help to generate.

Is it a one-time fix-all that will suddenly bring Rowan County to the forefront of prosperity? No. Is it a step in the right direction? I believe it is.

Our county government is trying to meet the needs of its citizens by being creative in bringing some much-needed attention to Rowan. I say good job and thanks for caring enough to step up.

If you travel a great deal you see these type of structures a lot; they are not a novelty. The only thing interstate travelers are interested in are signs for a restaurant, gas or a hotel — that’s all. If this thing is built, lose the flags. They will be hard to maintain; nothing worse than seeing a faded or worn flag flying.

Maybe we need some new signs but to spend $650,000 on these is just too much. Just a simple sign with granite would be a good start, but flags etc. are  just too elaborate. Maybe it would be good to show a picture of the “mall,” where else we are wasting our tax dollars.

I am in agreement that an entrance/gateway sign is a good idea. However, I will agree … that flags will be hard to maintain. …

The area around the location is also of concern. If first impressions and image are everything, then you may wish to make sure that the salvage yard on the southern end of the county is hidden.

It is a shame that there is no input from the community being “rebranded.”

With all the reference to the Gaffney Peachoid water tank, it occurred to me to kill two birds with one stone — invest in the water system and paint the tank like a softball for the Rowan Little League Girls. Paint upkeep would be a lot cheaper than the upkeep on these landscaped signs.

I believe something functional like water lines are considered economic development as well.

It is a waste of $325,000 in taxpayer and donated money. Yes, the sign would be an eye catcher, but once you get off the exit and hear those gun shots, they’ll be looking for a sign to get back on the freeway and high tail it. … Come on, commissioners, use that money to hire more officers, so we could get back to being the Salisbury that I used to enjoy.

A complete waste of our money, just like the “art” at the I-85/Innes Street exit. Want to improve tourist perception of Salisbury-Rowan? Then how about our 24-hour bus station in East Spencer, which is the only thing riders ever see of our county?

Whatever you put up, it should acknowledge we’re home to 50-plus NCHSAA  (N.C. High School Athletic Association) championships, or whatever the current running count is. Salisbury High School alone has over 40.

Would that $650,000 have hired a nationally ranked industrial recruitment firm? Looks like the gates to the old PTL club, Carowinds or a rest area at Colonial Williamsburg.

Hey, wait a minute. How about a sign shaped like a jet since our commissioners waste so much money on hangars at the airport?