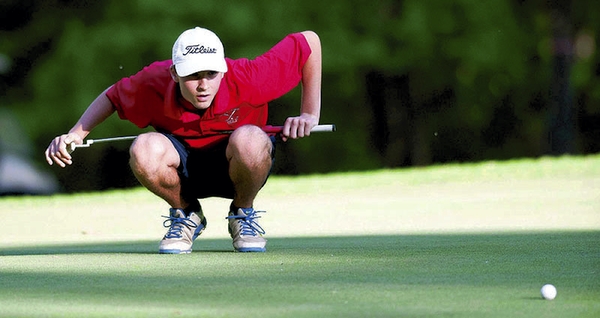 Nick Lyerly carded a 1-under par 70 on Thursday and finished second in the Trusted Choice Big I National Golf Championship, a junior tournament at Del Paso Country Club in Sacramento, Calif.

Lyerly, who had a 64 on Wednesday to move into second place and a place in the final group yesterday, had too many bogeys while leader Jacob Bergeron shot lights out, winning by eight strokes at 18-under par (266) for the tournament.

Almost as impressive at 10-under par (274) for the event, Lyerly, a rising senior at East Rowan High School, finished five strokes ahead of third-place — five golfers tied at 279.

Bergeron, of Slidell, La., blistered the course on Thursday with a 64, sinking six birdies and an eagle. He had five of his birdies on the front nine and had just one bogey, on the par-4 16th, when victory was well in hand.

After a 70 on Monday, Bergeron, also a rising senior who has verbally committed to LSU, had three straight rounds in the 60s.

Lyerly was just two strokes behind Bergeron entering Thursday’s final round and matched the eventual champ stroke-for-stroke early in the day.

Both young golfers scored birdies on the first two holes — the par-5 first and the par-3 second. That put Bergeron at -13 and Lyerly at 11-under par for the tournament.

“I started the way that I needed to start, with a couple of birdies, but it didn’t affect him (Bergeron),” said Lyerly. “He was just on fire all day. He played a great round of golf … just didn’t miss any shots. He hit it long and straight and his birdie putts weren’t really that long because of his accuracy.”

After both players had pars on No. 3, Lyerly actually cut the deficit to one stroke when he birdied the par-5 fourth hole, while Bergeron had a par.

But on No. 5, a par-3, Lyerly had his first bogey since Tuesday and Bergeron stayed steady with another par. Bergeron finished the front nine with three birdies out of the four holes and Lyerly suffered yet another bogey.

As the two made the turn, Bergeron was at 16-under for the event and Lyerly was at minus 11.

“I just wasn’t able to get up and down on a few holes on the back and I had one three-putt that I was disappointed with, but I ran away from the field myself and still lost by eight,” said Lyerly. “That shows you how well he (Bergeron) played.

“On most days, I played good enough to win,” continued Lyerly, “but there wasn’t much I could do except shake his hand and say congratulations.”

The second-place finish for Lyerly continues his amazing year. He finished second to East teammate Logan Shuping in the Rowan County tournament, but then won the South Piedmont Conference title at Warrior Golf Club in April.

Lyerly finished second individually in the regionals, as the Mustangs took first place. In the state 3A championship, Lyerly was fifth in the event as East finished as the runner-up.

This summer, Lyerly won the North Carolina Amateur in Chapel Hill, defeating juniors and mature golfers alike, from around the state.

He then finished in the top 20 of the U.S. Amateur qualifying in Sanford, although only the top three spots moved on.

Lyerly then competed in the U.S. Junior Amateur near Chattanooga, Tenn., July 18-21, finishing in the round of 16 against the top junior golfers in the country — and some of the top international players.

He rushed back to Salisbury from Tennessee in time to try to defend his title in the Horace Billings Rowan Amateur on July 22-24. Lyerly did win his first-round match but fell on the second day to Brad Vinson, 1-up in 19 holes. Vinson won the match despite seven birdies and an eagle from Lyerly.

Lyerly soon will team with another high-profile local junior, Michael Childress, in the annual Crowder-Dorsett Labor Day 4-Ball Tournament at the Country Club of Salisbury.

Justin Emmons of Asheboro, Lyerly’s friend and future teammate at UNC Greensboro, finished in a tie for 37th place at the Big I with an 8-over par score of 292. Emmons’ 69 on Tuesday helped him make the cut, but he shot 75-73 during the last two rounds.

Another North Carolinian, Blake McShea of Zebulon, entered the last round tied for 18th but a 75 on Thursday left him in 26th place. On the flip side, Blake Taylor, of Atkinson, N.C., shot a 68 yesterday and moved up to 15th.

NOTES: Lyerly flew out soon after his round and after a connection and layover in Los Angeles, he had a red-eye flight that was scheduled to have him back in Raleigh at 6:00 this morning. … By finishing second, Lyerly will be exempted from qualifying again next year for the Big I event, which will be held Aug. 7-10, 2017, at Annandale Golf Club in Madison, Miss. … In the women’s tournament, Taylor Hinson, of Belmont, finished seventh with a four-day score of 292.