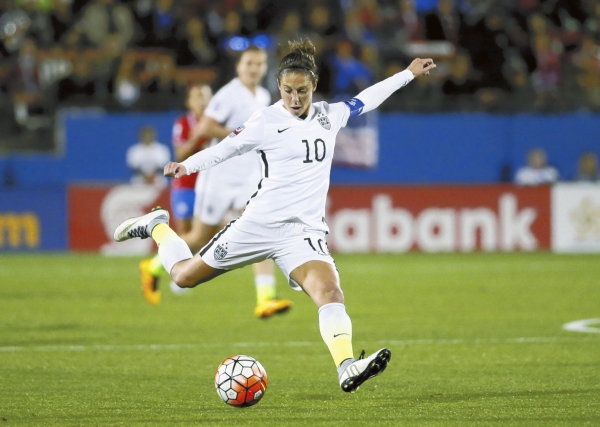 AP Photo/Tony Gutierrez, File ... In this file photo from Feb. 10, United States’ Carli Lloyd takes a shot at the Costa Rica goal during a CONCACAF Olympic qualifying tournament soccer match in Frisco, Texas. After being cut from the Under-21 U.S. national team, Lloyd was having a career crisis in 2003. She then met James Galanis, who became her coach and mentor, and helped her become the best women’s soccer player in the world.

After scoring the gold-medal-winning goals at each of the last two Summer Olympics, what will Carli Lloyd do for an encore in Rio de Janeiro?

“I guess I’ve got to score three or four,” she joked in an exclusive interview with the Philadelphia Inquirer.

Except she has already done that, too — in last summer’s World Cup final.

The truth is that Lloyd doesn’t care what her impact is on the field as long as she’s able to help the U.S. women’s soccer team win another title.

“I want to come away with a gold medal and am really just going to be going out there every game and working hard, doing everything possible to help my teammates,” Lloyd said.

This one would be especially significant. In addition to being the Americans’ fourth straight gold medal, it would also be the first time that a reigning World Cup champion has claimed Olympic gold.

Lloyd will bring her usual blend of quiet determination and a ferocious work ethic to the American midfield. And there will be the added bonus of wearing the captain’s armband at a major tournament for the first time.

But while Lloyd, 34, has been a model of consistency in recent times, the alignment of teammates around her has not. Retirements and injuries have opened the door to a wave of dynamic new midfielders led by 24-year-old Crystal Dunn, 22-year-old Lindsey Horan, and 18-year-old sensation Mallory Pugh.

They are three of the four players on coach Jill Ellis’ 18-player roster who haven’t played in a major tournament before. The fourth, 28-year-old Allie Long, could also be on the field when the U.S. team kicks off against New Zealand on Wednesday.

Yes, that’s two days before the opening ceremony. The soccer competition starts early because there are so many games to play.

Dunn and Pugh are dynamic playmakers who will likely line up on the wings. Horan and Long — or perhaps Morgan Brian, Lloyd’s teammate on the National Women’s Soccer League’s Houston Dash — will hold down the center of midfield.

Lloyd will be right in the middle of it all, driving the attack forward so lead striker Alex Morgan can feast on a range of setup passes.

And that’s just a taste of what Jill Ellis’ roster could produce. Christen Press is a lethal backup striker who can also play wide. Tobin Heath’s creative skills in midfield are almost unparalleled. The one player who can match them, Megan Rapinoe, could be the ultimate super-sub off the bench as she finally returns from a torn ACL.

Remember all the doubts about the U.S. team heading into last summer? They’re gone now, and not just because of the World Cup triumph. For as good as that team was, the current squad is arguably even better and the clear favorite to win gold.

“When I first got on the team (in the early 2000s), it was basically just long balls the whole time,” Lloyd said. “We’re becoming more sophisticated.”

But that doesn’t mean there won’t be challenges. There will be plenty. A big one will come Aug. 6, when the U.S. team faces France, perhaps the only team in the world that can match the Americans for skill. They didn’t meet in the World Cup — France lost to Germany in the quarterfinals — but they did in a friendly in Nashville in March. France played better for much of the game, and it took a last-minute goal for the U.S. team by Morgan to eke out a 1-0 win.

Lloyd is convinced her team is ready for the challenge.

“If we come out with our American mentality and put these teams on their heels and intimidate them, that’s the extra edge that we have,” she said. “Finish our chances and be stellar on defense as we usually are, and we should be all right.”

The Olympics also present a World Cup’s worth of travel jammed into two and a half weeks. There will be games every three days at venues spread far across Brazil, and most aren’t anywhere near Rio.

The U.S. team will play its first two games in Belo Horizonte, then head to the heart of the Amazon rainforest to play Colombia in Manaus. The quarterfinal will be in Brasilia if the Americans win their group or Sao Paulo if they finish second.

Only by winning the group would the U.S. team get to Rio before the medal round, as the legendary Maracana stadium will host the semifinal on that side of the bracket. Belo Horizonte will host the other. The gold medal game will also be at the Maracana, and the bronze medal game will be in Sao Paulo.

If any team can handle all that, it’s one from a nation in which flying to pretty much every game is a matter of course.

“I don’t think we get rattled by too many things that we can’t control,” Lloyd said. “Whether it’s Zika, whether it’s (dirty) water, you name it, I’m not concerned. The only thing I’m concerned about is going over there and winning a gold medal.”