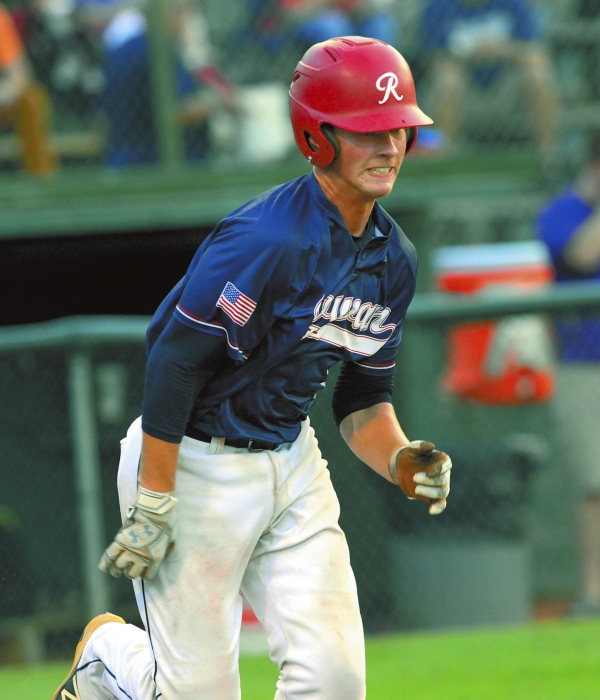 Wayne Hinshaw/for the Salisbury Post ... Rowan County’s Trevor Atwood, shown in a game earlier this season at Newman Park, had the game-winning hit on Tuesday as the team won the state championship, 3-2, over Union County. The Southeast Regional begins Wednesday in Asheboro.

The field is nearly finalized for the American Legion Southeastern Regional Tournament that begins on Wednesday at McCrary Park in Asheboro.
As of Saturday, Florida and West Virginia were still determining state champions. Those champs will join Rowan County, host Randolph County, Florence, S.C., Covington, Ga., Columbia, Tenn. and Troy, Ala., in the eight-team field. The tournament will conclude on Sunday, Aug. 7, with the winner moving on to the World Series in Shelby on Aug. 11-16.
Rowan’s pitching rotation of right-hander John Owen (5-1), lefty Bryan Ketchie (8-2), left-hander Brandon White (7-1) and right-hander Sawyer Strickland (5-2) has provided the foundation for a 33-11 team that won 23 of its last 27 games and took back-to-back state championships for the first time.
First baseman Hunter Shepherd (.365, 6 homers, 23 doubles, 61 RBIs), right fielder Lee Poteat (.440, 43 RBIs, 30 steals) and center fielder Chandler Blackwelder (.394, 19 doubles, 22 steals, 58 runs) have produced terrific offensive seasons that have placed them on the all-time lists for the program.
DH Brandon Walton is batting .345 with 44 RBIs. Third baseman Juan Garcia and catcher Trevor Atwood provided the key hits in the come-from-behind, 3-2, victory against Union County in the state-title game.
In the first round of the Southeast Regional, Rowan will take the field at 4:30 p.m. against perennial power Columbia (34-6), which claims the Tennessee state title virtually every year. Columbia actually won the crown by forfeit this time, as the Nashville team that reached the final and still had to beat Columbia twice was out of pitchers.
Columbia Post 19 has been competing in Legion ball for 87 years and has won three regional championships. Columbia was the World Series champion in 2007, taking the title in Bartlesville, Okla.
Rowan eliminated Columbia in a 4-3 game last summer on the third day of the Southeast Regional. Riley Myers pitched a complete game, and Heath Mitchem drove in two runs.
Columbia returned to the Southeast Regional in 2015, as Tennessee replaced Kentucky in the tournament.
In 2014, Columbia played in the Mid-South Regional in Arkansas, won it, and went on to finish fifth nationally in Shelby.
Karson Ambrose, a lefty-swinging Carson-Newman outfielder who was the regional MVP for Columbia in 2014, is still on the roster and still crushing the ball, so he’s someone Rowan will have to pitch to carefully.
Switch-hitting infielder Bryce Giles also has enjoyed a fantastic year for Columbia and was batting .556 in the last available stats.
Columbia is located in the central part of Tennessee and is known as the Mule Capital of the World.
On the second day of the tournament, Rowan County will play either Georgia or South Carolina. A first-round loss would mean a 9:30 a.m. game, while a first-round win would mean a 4:30 p.m. contest.
All-tournament passes are on sale for $40.