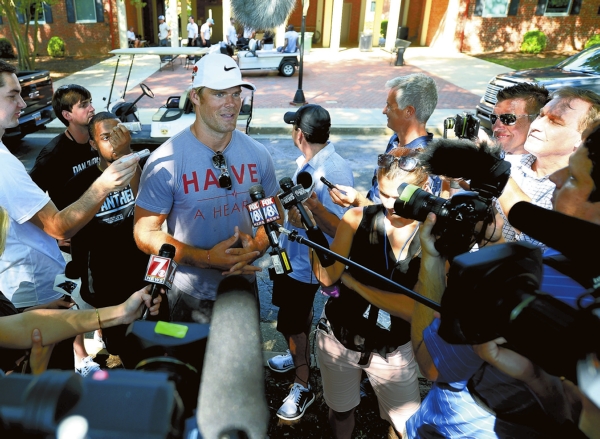 Short reported to training camp on time Wednesday, the same day the Panthers announced they gave safety Kurt Coleman a three-year extension that runs through the 2019 season. Financial terms were not released.

“It’s not about the contract, it’s about helping this team,” Short said. “I love the Carolina Panthers. Hopefully things will get done.”

Short, entering the fourth and final year of his rookie contract, is set to cost $1.47 million under this year’s salary cap.

He significantly outperformed that deal last season when he finished with 11 sacks and three forced fumbles and became the first defensive tackle to win NFC Defensive Player of the Month twice in a season. Short is expected to command a huge deal comparable to the five-year, $86 million contract the New York Jets gave to Muhammad Wilkerson and the six-year, $103 million deal the Philadelphia Eagles handed Fletcher Cox.

Both deals averaged more than $17 million per season.

Panthers general manager Dave Gettleman is hopeful a long-term deal can be worked out with Short.

“It’s like the point guard and center thing,” Short said. “You want to play point guard sometimes (when you are) a center. But big guys need love, too. To see big guys get rewarded like that is a blessing.”

But he said his focus right now is on football, not finances.

While the Panthers are continuing to negotiate with Short, he wouldn’t say if the two sides are close to reaching a deal.

When asked if he thinks a deal will get done by the end of training camp, Short replied: “I don’t know. It’s hard to tell. If so, I will be happy for it. Last year was a great year for me, but I need to do even better this year.”

Coleman was rewarded Wednesday for his outstanding season.

He led the Panthers and finished tied for third in the NFL with career-high seven interceptions in his first season in Carolina. He contributed to a team that ranked sixth in the NFL in total defense and led the NFL in interceptions (24), takeaways (39) and points off turnovers (148).

Said Gettleman: “Kurt is a pro’s pro and he’s a great fit for us. He had a career year last year and does everything we ask. And he adds a veteran presence in the DB (defensive back) room.”

The 28-year-old Coleman finished third on the team with 103 tackles.

“When you go through situations you want what’s best for your family and what’s best for the team, and I’m really excited,” Coleman said. “I’m fortunate to be a part of this team for three more years.”

Wide receiver Kelvin Benjamin and linebacker Luke Kuechly are “all go” for training camp as expected, according to coach Ron Rivera. Cornerback Bene Benwikere has been placed on the PUP list but can be activated at any time.

Overall, Rivera said he feels good about his team, although he knows the heat is on — and he’s not just talking about the 100 degree temperatures in Spartanburg.

“My feeling is we are the hunted,” Rivera said. “We are where a lot of people want to be.”