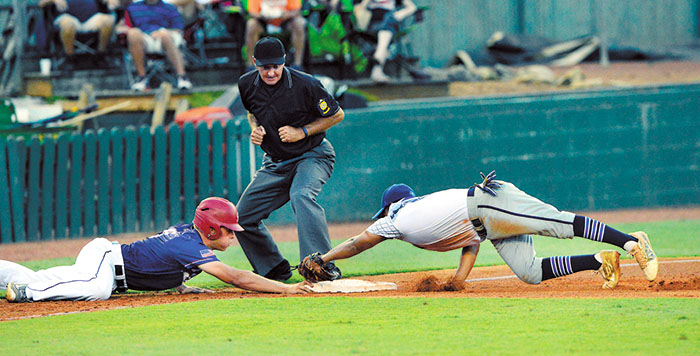 SALISBURY — The good news for Rowan County fans is the team didn’t do much right on Sunday night and still got the tying run to the plate in the bottom of the ninth inning against one of the state’s best teams.
“We couldn’t get out of our own way tonight,” Rowan coach Jim Gantt said. “Walks and errors killed us, and it’s just hard to believe that we can play so good one night and so bad the next.”
That’s just the nature of baseball — especially teenage baseball.
Rowan trailed 7-2 early at Newman Park against High Point and finally lost, 10-8. High Point Post 87 bounced back from a stunning, 10-0 loss to John Owen and Rowan County at Finch Field on Saturday, and now the best-of-three Area III championship series is even at a game apiece. The decisive game will be played tonight at Finch Field at 7 p.m., with bragging rights, a trophy and Area III’s top seed for the state tournament at stake.
“We played a game tonight that I’m just glad we got out of the way before the state tournament,” Rowan right fielder Lee Poteat said. “We made too many mistakes to win this one, but we really do want to win the area championship. That top seed is important to us.”
Rowan hurlers walked eight High Point hitters and hit two more, and that’s a recipe for disaster with the bats High Point (23-5) has in the lineup. Ryan Caveness smoked a two-run double in the first inning against Rowan left-hander Bryan Ketchie, who had been on a serious roll. Then Caveness added another loud, two-run double in the third to give the visitors a 4-1 lead.
“It was important that we came out and hit the ball early,” High Point coach Rob Shore said. “That allowed us to flush what John Owen did to us in the first game of this series. You always worry about a carry-over from a bad game, but we came out swinging.”
Ketchie has been baffling in recent weeks, but he lasted only four innings and was stung for four doubles. Brett Graham, Noah Gonzalez, Hayden Setzer and Sawyer Strickland followed Ketchie to the mound with mixed results.
Shore pushed the right buttons with his bullpen. Winner Charlee Edwards relieved in the third inning and doggedly took the game into the sixth. Hard-throwing lefty Matt Stanley took the ball from there, and he finished Rowan off for a hard-earned save.
“Stanley didn’t have his good off-speed stuff, but he was rested and he was throwing hard,” Shore said. “It’s the first time we’ve used him this season in relief.”
Rowan fought tenaciously offensively. Down 7-2 in the sixth, Rowan scored four runs after two men were out. A single by Chandler Blackwelder, one of his three hits, got the inning started. A walk to Dalton Lankford and an opposite-field hit by Hunter Shepherd filled the bases.
When Lee Poteat was struck on the left hand by a pitch, it was 7-3. Juan Garcia’s two-run single made it 7-5 and knocked out Edwards. After Brandon Walton walked, Trevor Atwood lashed a solid knock to center. Poteat scored on the hit to make it 7-6, but High Point center fielder Nick Goard nailed Garcia at the plate with a perfect throw.
With two men out and the No. 8 hitter on deck, it made sense to send Garcia there, but Goard’s throw was both strong and accurate. That play kept High Point in front by a run, and Rowan never did get all the way back.
Rowan relievers issued three bases-loaded walks as High Point tacked on more runs, and Rowan messed up tailor-made double play balls in the seventh and eighth, errors that proved costly. High Point is not a team you can give five outs in an inning to, and Rowan (28-10) did it twice.
High Point left 11 men on base. while Rowan stranded 12.
“We had the bases loaded a lot, but we couldn’t get a big hit,” Shore said.
Down 10-7 heading to the ninth, Rowan go its final run when Blackwelder singled home Owen, a pinch-runner, with two men out. Shepherd, Rowan’s big RBI man was in the on-deck circle when Stanley struck out Lankford on a high heater to end the game.
“Both teams made some miscues and both teams walked too many guys,” Shore said. “We played in a nerve-wracking atmosphere, but it was fun. I’m sure it was an exciting game to watch.”
There was no shortage of excitement, but execution was often in short supply. Both teams will try to play a cleaner game tonight.
•••
NOTES: Area III commissioner Bob Beeson was on hand, ready to hand out the championship trophy if Rowan won, but he’ll have to bring it to Finch Field tonight. … Gantt was concerned with Poteat’s ailing hand — Poteat bunted his last time up, and the hand was a factor in that decision. He almost got that bunt past the pitcher, but Stanley made a nice play. … High Point cleanup hitter Dylan Wilkinson was a problem, with two hits and three walks in five trips. … While High Point kicked a few, left fielder Timmy Fischvogt made a whale of a play on a hard-hit ball by Atwood to end the fifth. … Gantt said Rowan will send lefty Brandon White to the mound tonight, with Walton and Shepherd ready behind him. … Shore indicated ace Riley Isenhour would pitch some tonight. High Point has won of five meetings with Rowan.