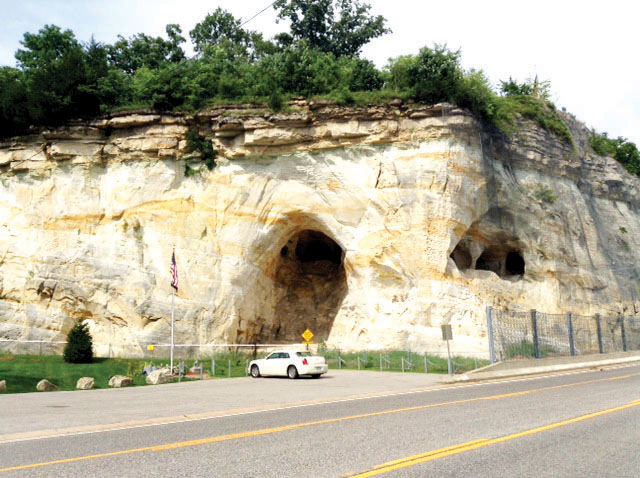 These prominent bluffs are along the highway in Pacific, Missouri. The caves came from Silica mining. Photo by David Freeze.

After yet another restful night and all my clothes washed at the Econo Lodge in Rolla, Missouri, I heard a weather forecast for more storms today. It turns out the the storm that drove me inside left lots of folks without power and many trees and limbs down.

My bike tire was fixed or at least I hoped it was. I added a prayer about that this morning before I went out the door. As it turns out, Rolla was also on the Cherokee Trail of Tears, as was most of my route back to Springfield. Rolla also had lots of motels nearby to where I came into the town during the worst of the storm. This Econo Lodge was a very good one and closest in my time of need.

It was cloudy for most of the morning as I rode east from Rolla. I climbed a big hill out of Northwye and pedaled into St. James. St. James has the only vacuum cleaner museum that I have ever seen, this one provided by the vacuum manufacturer Tacony. I didn’t go in but read that the vacuums go back as early as 1910.

On to Cuba and along the way, I was treated to the sight of the world’s largest rocking chair. It is 40 feet tall and certified by Guiness in 2008. The chair resides at a general store that was not open yet. In the town of Cuba, I saw lots of murals because Cuba is nicknamed “Mural City.” The murals depicted early businesses or people from the town.

Next came Bourbon and Sullivan, both pleasant little towns right next to I-44. Next was Stanton, home of the Meramec Caverns that opened commercially in 1935. The caverns are just a few miles off Route 66 and would be good for a half day of fun. The caverns were reported to be Jesse James’ hideout. There is also a separate Jesse James Wax Museum where the staff tries to convince you that James didn’t really die of a gunshot wound in 1881 but lived until 1952. I talked to a couple who had just come out of the wax museum and they weren’t convinced but were headed for the caverns next.

Next up was St. Clair with nothing noteworthy that I could find and so I pedaled on to several surprises. My maps showed a huge hill to be climbed after crossing the Bourbeuse River and it was a doozy. On a day when the number and toughness of the hills decreased a little, this was the toughest one. As it turned out, it was the high elevation point of the late afternoon when I topped out near Villa Ridge.

All afternoon, I had tried to called the Gardenway Motel. The phone just rang and rang and no message or person picked up. This motel was on the “must stay” list and I planned to do it. Just a few miles earlier, I had passed the Sunset Motel that was supposed to be closed yet looked open. When I got to the Gardenway, I knew right away that it was closed and probably had done so earlier this same year. I had asked in Stanton and was assured that the motel was still open.

The Travelodge and Suites wanted way too much money as the only motel left in town, so I kept riding. On to Pacific where the motel choices were slim and pricey, but they did have interesting looking bluffs along the highway that had been mined for silica. The result looked perfect for cave dwellers.

I talked to yet another convenience store clerk in Pacific who said to pedal seven more miles and there would be lots more motel choices. He was right, and I am in an affordable America’s Best Value Inn at Exeter, Missouri. It is right beside a Denny’s and that is where I will be heading shortly. Thanks to G. Patel for making a good cyclist’s deal on the room.

After 86 miles today, much more than I planned, the distance to St. Louis is now about 35 miles. That distance will give me time to get there after rush hour and head for the St. Louis Gateway Arch. I need to make sure that I can secure the bike long enough to visit the arch, so wish me luck on that. I also hope to cross the Mississippi River tomorrow. Past that, I don’t yet have a plan and will get something together tonight. It is almost time for Illinois.

Several of you have asked how hard it is to find your way along Route 66. As an example, in Missouri there are signs that tell you virtually every turn. It was this way for most of Oklahoma, too. The little bit in Kansas had good signs but bad roads. California, Arizona and New Mexico were not as good but the road was missing too in a lot of places. The answer is that you can find your way, but it may take asking directions from friendly folks.

Remember the China Grove First Baptist Men on Missions for their sponsorship and all the good that they do for the community. I imagine that they will be doing something at Farmer’s Day, too.

With that, I have lots to do before bed and there is more thunder rumbling. I am visiting Denny’s for eggs and pancakes shortly and will get some other supplies close by as well. Check back tomorrow for my journey into St. Louis and beyond.

Thanks again for riding along.