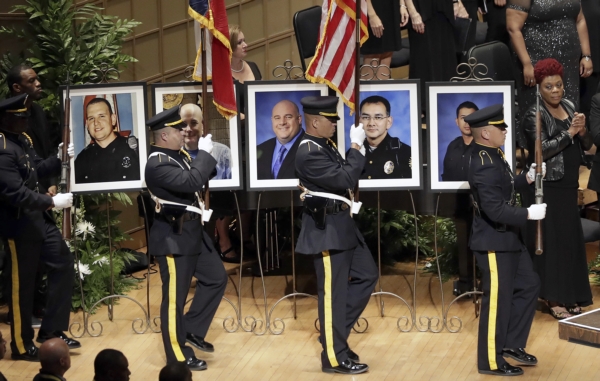 An honor guard passes the photos of the fallen police officers during a memorial service Tuesday in Dallas. The officers, from left, Michael Krol, Brent Thompson, Lorne Ahrens, Michael Smith and Patrick Zamarripa, were killed and several others injured in a sniper attack Thursday night. (AP Photo/Eric Gay)

A sniper’s senseless murder of five Dallas police officers last week has grieved the entire nation — from Salisbury to San Diego, from Duluth to Dallas.

The memorial service held in their honor Tuesday was a notable show of unity, as Ken Hersh, president of the George W. Bush Presidential Center, said:  “It was a historic moment for the mayor, an African-American police chief, an African-American president, a Caucasian former president to all be essentially delivering the same message — that enough is enough.”

Enough hatred and distrust. Enough disrespect for public servants. Enough taking for granted the officers who hold American society together.

“Like police officers across the country, these men and their families shared a commitment to something larger than themselves. …,” Obama said. “In this country we don’t have soldiers in the streets, or militias. Instead we have public servants.”

Obama aptly described the impact of their deaths and the killing of two black men by police in Louisiana and Minnesota in the same week. “The deepest fault lines of our democracy have suddenly been exposed, perhaps even widened,” Obama said.

“At times, it seems like the forces pulling us apart are stronger than the forces binding us together,” Bush said. “Argument turns too easily into animosity. Disagreement escalates too quickly into dehumanization.

“Too often we judge other groups by their worst examples, while judging ourselves by our best intentions.”

Law enforcement officers and families here in Rowan County share the same “commitment to something larger than themselves” — to protecting the public and maintaining law and order. It would be natural for officers to feel embattled and cynical; they see humanity at its worst. When you get a chance, show them your best thanks, respect and support. Our country would fall apart without the brave men and women who fairly enforce our laws.